"I can see my toes..." was scribbled in Arabic on a piece of torn cardboard smuggled out of a Syrian jail.

It was the third note my grandfather, a Syrian general, was able to send to his wife, my grandmother, by bribing one of the guards overseeing the cell holding him and several other senior Syrian army officers.

The bribe: a half empty packet of cigarettes. But it was enough it seems.

It had been two months since these officers were thrown into prison, and the men would remain there for another seven months. Meanwhile their direct families were under house arrest and relations were spied on.

A fourth note came a month later on a piece of coarse toilet tissue, and it said: "I can see my knees."

My grandmother, now in her 80s, smiles as she revisits this chapter of her life, dated somewhere in the early 1960s.

"He knew only I would understand his messages," she recalls. "They were his love notes to me." After I have made five guesses, all wrong, as to what these messages meant, she finally told me.

"He was telling me multiple things in that one line. That he is losing weight but not losing his eyesight," she said. With that, I was supposed to understand that most Syrian cells don't have windows and that they haven't done anything to his eyes. Not yet anyways.

Two months had passed and no notes were delivered. It was an extremely difficult time on the families of the prisoners, as no visitations were allowed and no questions were ever answered directly.

When you are down on your luck and targeted, most of the community will shun you and want nothing to do with you. It is only then you know who truly is your friend.

My grandmother never forgot a neighbor who always made sure she had enough food and medicine by sending them up a basket that was hung and pulled up from grandmother's bedroom window. (This friend later become a very important Lebanese official.) There were no consistent house arrest rules followed by the guards of the regime. There were days they allowed the families to go out, and then there were times when they kept them locked in for weeks.

Then one note finally arrived with the baker's son. It was a verbal one and it was just one word: "Gypsy."

That one still brings tears to my grandmother's eyes. She denies of course they are tears and simply dismisses them as a result of malfunctioning "tear ducts" because of old age.

I realized that sometimes the most powerful love stories don't even have the word "love" in them despite the fact there are many ways to say love in Arabic.

I heard my grandmother once mention "Ahwak," which is more than just love; it is related to sadness, the soul and air. 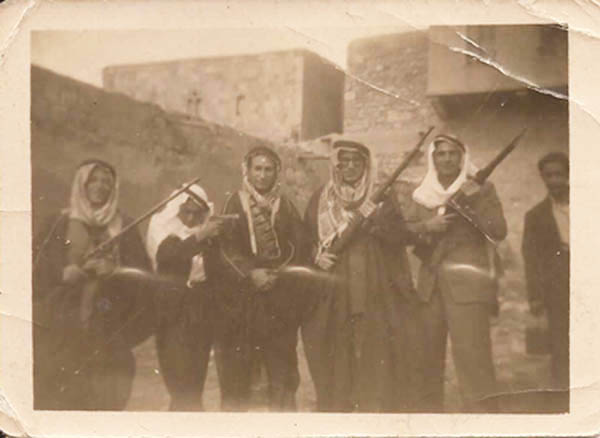 Grandfather, second from the right.

The pain and worry of separation is not confined to one person or one period of time, it is always difficult and one can't imagine it until it happens to them.

Today, hundreds of Syrians families, if not thousands, have a missing person they are struggling to find news about. Whether arrested and kept in jail, or suspected of being killed and lying somewhere in the rubble or even injured in an overwhelmed hospital, it is all horrific. My heart goes out to every single suffering family.

After covering wars in Iraq and Lebanon, I prayed it doesn't show its ugly merciless head anywhere else again.

When I recently interviewed a released Lebanese detainee from a Syrian jail, he said it was the "silence" that drove him mad. "It would sound like they were coming, their footsteps echoing, but then they would stop right outside the cell's door. You would see them, or their shadows. They would just stand there for a few minutes, quietly, and then they would leave. It happened almost daily."

A whole series of books can be written on this subject.

As for my grandmother, she talks about this chapter as if it happened just yesterday, not back in the early 1960s.

But what happened then is relevant today. For in my opinion, and I admit I am biased, this group and many others then who protested may well have ended up being the first revolutionaries against the Ba'ath Party. Of course, history books from the 1960s onwards write otherwise.

This group, huddled together in a dark dirty cell, were labeled the "traitors" of Syria. The Ba'ath party, a nationalist movement founded in Syria that advocated socialism and Arab unity, had become powerful and was putting all those who were a threat or who refused to join them into jail. In some cases, they would simply kill off -- 'quietly' -- anyone who protested too much.

There was a morbid joke that went around then, and sadly, still applies today, that senior officials in Syria seem to die either from a "heart attack" or "suicide." One case I remember very well as I happened to report on it, was the "suicide" of the late Syrian Brigadier General Ghazi Kanaan, an interior minister and former chief of Syrian military intelligence in Lebanon. At the time (2005), even Syrian media didn't do much to hide that, allegedly, "two bullets" were used in this alleged suicide.

"In the Arab world whenever there are regime changes, the results are always extremes. You are in jail or killed or in power," a senior source once told me.

My grandfather was one of the top officers of the former Syrian regime, Syria the republic, a proud yet turbulent Syria that had won its independence from France & then from Gamal Abdul Nasser's United Arab Republic. Ironically, my grandfather, who welcomed Nasser, was one of the officers who joined Abdul Al Karim Al Nahlawi in staging a coup that ended the union of Syria and Egypt as the United Arab Republic on September 28, 1961.

Many believe it is during this time, the early 1960s, that the roots of Syria were destroyed, crippling its soul allowing for men like Hafez Assad -- who came on the scene in 1970 -- to be able to rule over with an iron fist.

By taking away Syrian people's most basic rights, the right to speak freely, to think freely, even the right to travel, you break their spirits to mold them to your whims.

Of course, history is far more complicated than this, with the world players always active in the background. For instance, the U.S. played a role in hijacking the democratic process that was going on in Syria during the presidency of Shukri Al Quwatli, Syrian president from 1943 to 1949 and then from 1955 to 1958. In the first term he was ousted in a U.S.-engineered coup, and in the second term, he handed over power to the Egyptian president Gamal Abdul Nasser.

What made up the Syrian army then is different than today's army. It is said it was made up of "elite" Syrian families and that the top Syrian families all sent their sons to join the army then, as there was a certain kind of prestige to be part of the army. For example, I know they used to send Syrian officers to France for training. Doubt this happened in recent decades.

However, it is all subjective and depending on who you ask, you get a different answer.

I can only speak from what I saw and the Syrian forces that were occupying Lebanon (1976-2005), for instance, didn't even have proper shoes, change of clothes or any medical coverage. Those I interviewed had missing teeth (some rotting) from not being able to afford a dentist. It was disgraceful to keep one's army in that state. (No wonder they took out their bitterness and desperation on the Lebanese.)

And then you have those from the past who refused to yield, like my grandfather, fought on stubbornly with great consequences on their life and the lives of their loved ones. There are families with these kinds of stories from across the Arab world and beyond. I hope the grandchildren dig them up and revive them for future generations. I believe it is important to find the hidden corridors in historic moments.

A faded photo of an attractive man in an army uniform winking at the camera as he shows off his pink Cadillac is one clue I have into grandfather's legendary sense of humour. My grandmother loves to tell me this story of her flamboyant husband who drove to the Syrian-Lebanese border with his recently purchased pink Cadillac convertible to hang out with his comrades from both countries. He had family links across the Arab world as well as Turkey, and was said not to care about what passport one carried as long as an "Akhlaq" (ethics) passport was among them.

It is this spirit that helped him and some of the other officers survive their repeated imprisonments whenever the Syrian political scene changed. Some didn't make it, and it was never discussed how they died.

In this particular chapter, there is a happy ending.

Nine months after my grandfather was taken, the story goes, a very thin man in shapeless 'farmer-like' clothes showed up at the front door of our ancestry home in Damascus.

At first, my grandmother didn't recognize him through the peep hole and asked: "Who is it?"

Breaking into a laugh, the man at other side of the door said, "It is Omar Sharif," referring to the legendary heartthrob Arab actor.

The 'giant' man, who had been over six feet tall with a big belly, had shrunk and looked to have aged ten years in nine months.

He never talked about what happened inside the cell. But he also never lost his sense of humour.

When most would be broken, he summed up his ordeal with: "Now I can fit into my son's clothes..."

Rym Tina Ghazal is a senior feature writer and columnist for The National Newspaper.