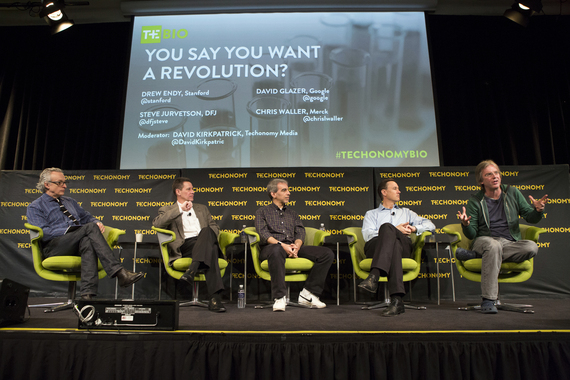 Waving his smartphone at the audience, Stanford bioengineer Drew Endy said, "I'm trying to grow one of these." Let the day of mind-blowing conversations about the future of biology begin.

Endy joined Google Director of Engineering David Glazer, Silicon Valley venture capitalist Steve Jurvetson, and Merck Director of Scientific Modeling Platforms Chris Waller for the Techonomy Bio 2015 opening panel, "You Say You Want a Revolution." Techonomy CEO David Kirkpatrick moderated the discussion about how innovations at the intersection of IT and biology will transform industries and products beyond life sciences.

Communications hardware probably wasn't anyone's top candidate for bioengineered disruption, but Endy explained: "Think about how an object like a cell phone is manufactured today. Imagine you live in the future and think backwards about where we could take surplus manufacturing capacity, [which is] now invisible to us because we just choose to ignore it, and say, 'We're going to repurpose a type of plenty that we have to grow objects in a different way.'"

What's a "plenty?" Endy pointed, for example, to gardens in the community of Menlo Park, which he said collectively ship 16 million pounds of clippings, pine cones, grasses, and leaves -- 0what Endy calls "state of the art nanotechnology" -- to the compost heap annually.

How is a pinecone nanotechnology? "You can take a wood fungus that eats plant material and have it recompiled over a period of time to differentiate into an object that you wouldn't think of as being manufacturable via biology," Endy said. "It requires doing hybrid synthesis of biomaterials, it requires program patterning, but I mean it quite literally."

A more apt verb for bio-based product development of the future might be "to parent," according to visionary tech investor Steve Jurvetson, a partner at Draper Fisher Jurvetson. He predicted a move away from "a manufactured, designed, controlled, sculpted, and architected world where things do what you want, to a grown, organic, robust future where physical artifacts are grown."

At Merck and with the Pistoia Alliance, a collaborative effort that he helped establish to lower barriers to innovation in life sciences R&D, Chris Waller is building modeling platforms and systems that could be essential to realizing the type of product creation Endy and Jurvetson envision. Waller said his work tries to "shortcut the process" that spans early product concept through manufacturing through marketing and through healthcare or use of pharmaceutical compounds. "Ideally when we're making drugs there are a lot of questions we ask about 'should we, can we, and how do we make it?' Our information comes from these big data stacks ... but there are holes in the data, so we have to do a lot of experimentation."

Waller's models mimic animal experimentation, which he says not only saves animals, but also decreases the product development cycle time while generating compounds of equivalent quality. "We still have to do spot testing to make sure it's working, but we will have a platform that relies on information, models, and knowledge to drive process in a much more efficient way and biologically friendly way," he said.

At Google, meanwhile, David Glazer said his work tries to "grease the bits" of the "atoms, bits, and cells world." It's what Google is already good at, he said, and bringing it to biology will be a boon. Any time an industry becomes "software-enhanced," he said, "you get this immediate acceleration; it jumps onto a new curve."

Glazer said he sees life sciences, and genomics in particular, transitioning from artisan scale to factory scale processing. "The folks who work on the wet side of things have gotten good and are generating more data than they ever had to work with before, so they're moving into Google's sweet spot--building ecosystems to help communities to unlock data from large amounts of information," Glazer said. "That's about to be important in this area."

Companies including Gingko, Emerald, Transcriptic, Gen9 and Zymergen are also creating platforms and services that "allow many other people to do more things ... clicking into a future where many other people can get access to what has previously been a very exclusive, artisanal, expert-driven process," Endy noted.

Jurvetson said that in the work of companies he invests in, he foresees a world "where we are dealing with data sets and building complex systems -- whether that's software or things--that exceed human understanding, that are beyond the ability of anyone -- even teams of people -- to understand ... that allow us to transcend human limitations; to, just like evolution itself, build complexity greater than that of its antecedents."

An abstract forecast, perhaps, but Jurvetson pointed to products he is seeing built today using biology-mimicking software techniques, "whether it be the microbe that makes a chemical, or a piece of software that recognizes faces in a crowd," or technology that he said is "now creeping into medical imaging, where you can do better than radiologists or better than the people reading mammograms or reading MRIs."

In the "not too distant future" he said he expects multicellular organisms designed to comprise regulatory feedback loops. "This complexity compounds so dramatically that you're going to need approaches like the Google approach to everything."

You're also going to need a dramatic shift in behavior, said Waller. "To make this happen requires a different culture and way of working," he said. "Large pharma is very risk averse. ... The challenge is to get these groups who are rewarded for keeping information to themselves to work up and downstream from each other so we can see these benefits."