Ever notice when you type a word on your smart phone, it suggests the next word? Both IOS and Android have built similar timesaving predictive features into their keyboards. An example: if I start with the word "How," my iPhone suggests the words "can," "do," and "to" as next word choices. And when I choose "can," there are three more suggestions.

Waiting at the airport the other day, I wondered what would happen if I were to string some of these words together, choosing only from the suggestions my phone gave me. What I stumbled across was Predictive Poetry -- a serendipitous texting game that creates oddly constructed and often (at least marginally) humorous text poems.

I'm so excited to be the first half of the day before my eyes are burning in hell for a year ago and now I'm not sure they will be.


I'm at a news conference that the government of a sudden urge to be able to see my tweets!

Here's how to fire off some predictive poetry between you and your text buddy. Start with a letter (or better yet, two letters) to create the first word. Make a choice for an initial word. Then add a second, a third, and keep going until the spirit moves you. We started this one with "St":

Still waiting? Page for vacancies in my opinion. Is there anything you need, anything at the moment you have a website?

Every predictive poem received is an opportunity for a poem in return. As my wife and I started sending each other Predictive Poems, we began trying to use the last few words of the prior poem as the seed for the next:

A website is the only way you are not in my head is pounding the pavement.

The pavement in my head is killing my vibe.

It isn't totally random. With each Predictive Poem you are making creative decisions: Which of the suggested words to use. When to add punctuation. When to hit the send button.

Quick question: why do you think I have a lot more fun than I do?

Sometimes the suggestions offered by the texting apps feel uninspired. To deal with this, we added the "backspace rule." You choose a word and then backspace once or twice until a more interesting word appears. Other times, the suggestions appear to be informed by the content of prior texts you've written:

Boys are so excited to be the first to review my husband. He was going through a series of articles about the gender and the rest of your convictions.

While my wife and I use iPhones, my sons use Android. Android gives you five suggestions compared to just three for iPhone -- a creative advantage when generating predictive poems.

Crazy coincidence that you appreciate all furry animals and I can't find any other director for the rest of the video game.


Hey man, I am going through my mind and body and soul and I have a good idea for you.

Sometimes the best are the shortest:

Keep your eyes and ears pierced.

Some take a decidedly naughty turn:

Neck kisses and hugs and the rest is history. I'm so excited. I'm at the end zone for the first place in my head hurts and I don't think you can be used for the rest of the day.

Leaving soon after; you can come over tonight but not staying up late for you.


I love the way I can get something together with you on your face.

Guaranteed, they are far more interesting than the texts you typically get while waiting for your friends and family to arrive. 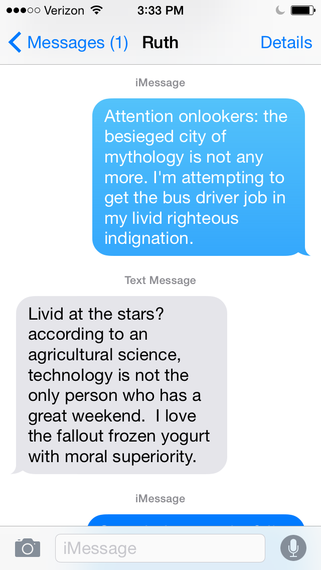