Pregnancy cravings are a myth, or so I thought until I found myself 13 weeks pregnant and ravenously scarfing down nachos for the second time that day.

I went from regularly eating salads to demanding tortilla chips piled high with beans, queso dip, salsa and extra sour cream (emphasis on extra). It was literally all I could think about when the hunger pangs kicked in.

We’ve all heard about pregnant women and their wacky appetite for things like ice cream with pickles or Beyonce’s need to dip bananas in ketchup. While weird cravings do happen, pregnant women are more likely to hunger for comfort foods — and that’s because of biology.

Lauren Hayes, a Wisconsin mother, discovered she had an insatiable craving for ice cream when she was expecting her second child. It wasn’t just any ice cream, though. She only wanted smooth and creamy soft-serve vanilla ice cream with mix-ins from chains like Dairy Queen and Culver’s. Recalling one dire incident, she told HuffPost, “I had to take my 1-year-old daughter out in the rain just to go get it, because I had to have it. It was just so crazy. I didn’t have anything like that when I was pregnant with her, but I could not stop thinking about that ice cream [during my second pregnancy].”

Several studies show that pregnant women tend to crave foods that are rich in calories and fat, both of which are also traits of comfort foods.

While the exact reason for cravings like that is unknown, there appears to be a hormonal link. Dr. Jolene Brighten, a naturopathic doctor and author of the book Healing Your Body Naturally After Childbirth, explained that women’s sex hormones shift during pregnancy. As a result, she said, “Sometimes we can see lower dopamine levels, which will cause you to crave everything.”

Dopamine is a “feel good” chemical. When we even think about eating foods that are high in fat and calories ― often our comfort foods ― it raises our dopamine level and therefore makes us feel good.

When that level drops during pregnancy, women may be inclined to seek out foods that will raise it again. Suddenly, foods you haven’t thought about in years may dominate your lunchtime fantasies.

There’s also a theory that expectant mothers hunger for foods that supply them with nutrients they’re missing. According to Alisa Vitti, a functional nutritionist and founder of Flo Living Hormone Center, food cravings generally signal that your body is calling out for specific micronutrients.

Salt, dairy, sweet, fat ― those are all key aspects of comfort foods. So craving for such foods, Vitti said, is the pregnant body’s way to get the kinds of food “that a woman who has a history of dieting might not typically include in her diet.”

Indeed, other pregnant women I’ve encountered have said they craved things they would never normally eat ― like Hawaiian pizza with hot sauce or chocolate and sweets for someone who usually prefers savory snacks.

It may be hard to believe in the fat-fearing world we live in, but these comfort food cravings could be an indication that we need fat. “In the third trimester our brain starts shrinking and baby’s brain is expanding,” Brighten said, and the human brain is 60 percent fat. So hunger for foods like mac and cheese could also be “about getting higher amounts of fat.”

Sure, one could get that fat from more nutritious sources like salmon, but good luck getting most women in the throes of first-trimester nausea to cook fish.

In general, comfort food cravings during pregnancy are nothing to worry about. (Contrast that with a condition called pica, which can also arise in pregnant women. It’s a craving for something you really shouldn’t be eating, such as paper or dirt.)

Brighten does warn, though, not to let your diet to be taken over by soft-serve ice cream and mac and cheese. She suggests breaking meals into smaller portions and eating them throughout the day, as a way to help you keep healthier foods in your meal plan as well.

Of course, if you had told me that during my second trimester, I would have likely replied, “So six small servings of nachos? You got it!”

Why We Actually NEED To Eat Fat In Our Diets

Hunker Down With These Healthier Comfort Food Recipes 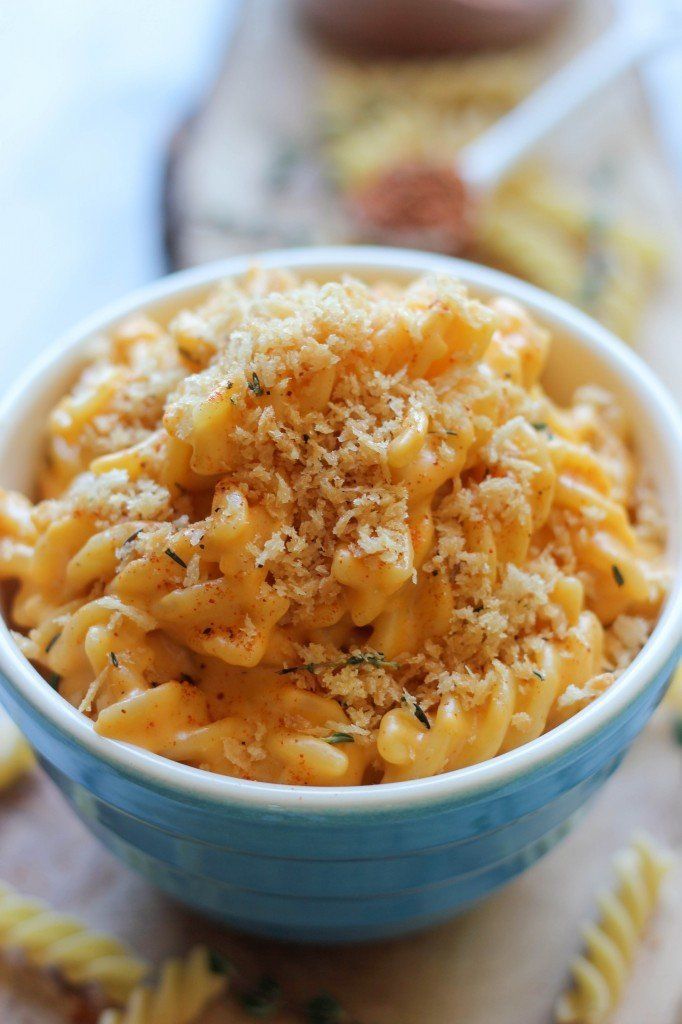