If your dreams have become particularly offbeat since you found out you were pregnant, know you're not the only one. Many pregnancy dreams are as weird as yours, and there's a reason for it.

Back in the 1970s, psychologist Alan Siegel held dream workshops with pregnant women. After sharing the markedly perplexing content of their nighttime imaginations, these women wondered aloud, "Will I be a good mother? Will the baby be OK?" According to Siegel, this kind of progression -- from describing dreams to analyzing real-life emotions -- is crucial during those life-altering nine months.

"The dreams were sort of this ideal stimulus for talking about the underlying feelings that went with pregnancy," Siegel, who has been researching the dreams of expectant moms ever since, told The Huffington Post.

All of those bizarre dreams women report having while pregnant can be a way for them to come to terms with their new role as a parent. It's all part of a "mental remodeling process," said Tore Nielsen, director of the Dream and Nightmare Laboratory at the Hopital du Sacré-Coeur de Montreal, in Canada.

Combine this mental shift with what Siegel called the "stew" of hormones pregnant women deal with, and you have a recipe for some pretty eccentric dreams -- think: giving birth to a toothbrush. (One mom recently told The Huffington Post she dreamed just that.)

The not-so-great news is that these hormone fluctuations can exacerbate the stress of odd or unpleasant dreams. Nielsen said levels of the stress hormone cortisol could be to blame, since they rise during the course of the night and during the course of pregnancy. No one has proven that increasing cortisol also ups dream intensity, but the correlation is strong, according to Nielsen.

There are a number of common dream themes for pregnant women, and below, the researchers break down the ones they've encountered most often. (Spoiler: Dreaming of giving birth to a toothbrush isn't so uncommon, after all.)

We asked HuffPost Parents readers to share some of their head-scratching pregnancy dreams, which appear quoted below.

1. Dreams About The Gender of Your Baby

Let's just get this out of the way: Dreams are not crystal balls that will tell a woman the sex of her baby.

"Dreaming about the sex basically shows that you're thinking about gender issues," Siegel said. "People want a certain gender, so it indicates preference even though they may not realize it." 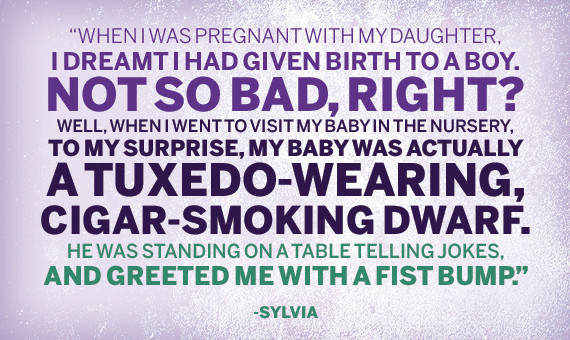 In the beginning of a pregnancy, dreams may deal with conception, which Siegel said often turn up in the form of metaphors (like a fish planting itself into a bed of a stream). In the first trimester, metaphorical babies may be represented by small animals that grow during the course of the pregnancy into bigger animals.

"In a way you can look at it almost as having an evolutionary value because the nine-month pregnancy is when the member of the species prepares to protect and take care of their offspring that’s coming," Siegel said. "Part of this growing prenatal psychological attachment that begins [in dreams] continues on when the child is born." 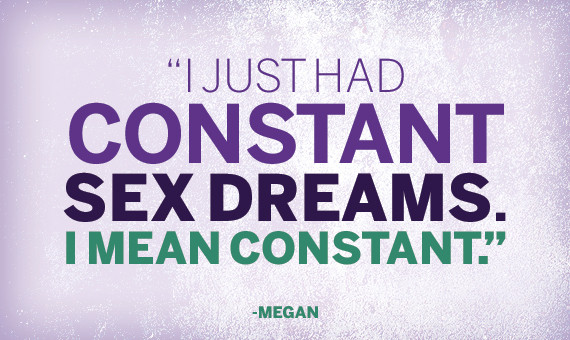 As a woman enters her third trimester, she may have more dreams about the actual birth, which both Nielsen and Siegel said is normal -- even if the dreams are unrealistic or morbid interpretations of the act (like going into labor in a public space and seeing the baby's limbs come out from under your dress). These mental depictions could show that a woman's concerned with losing control or worried about things not going according to schedule. But they also could be a sign that she's excited to meet her baby. 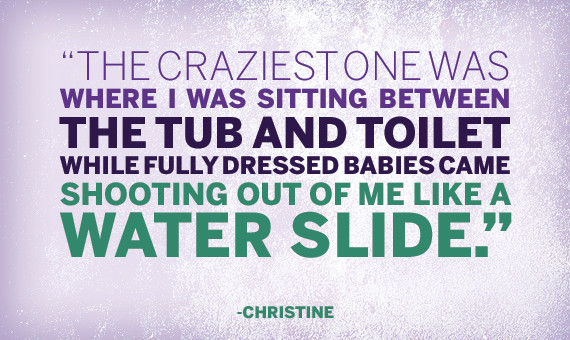 4. Dreams About Giving Birth To Animals Or Inanimate Objects

Dreaming about giving birth to a litter of kittens, a puppy or even a toothbrush isn't strange at all. This happens to be a long-standing trend in pregnancy dreams -- at the very least, it dates back to 1899, when Sigmund Freud published The Interpretation of Dreams and described a woman who dreamed of giving birth to a seal. 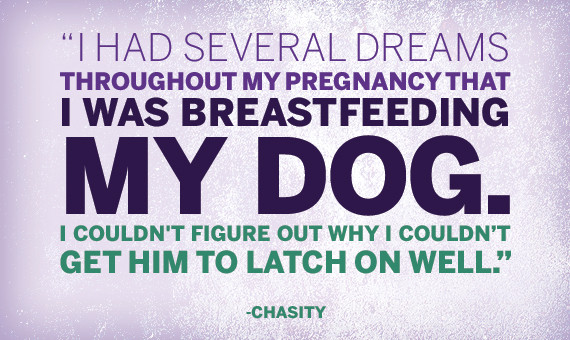 "This seems to be a pretty obvious metaphor or symbol of the child, but most people don't realize that," Siegel said. "They actually think that to give birth to an animal is a deformity dream that predicts that something terrible is going to happen, when actually it's an internal preparation for nurturing and the responsibilities of pregnancy."

5. Dreams About Being Trapped

Women might even dream about being trapped or submerged in water, which Siegel said is a way for the expectant mom to identify with her baby, who's "trapped" in the womb.

"Or it can be that you lose freedom when you become a parent," he added. "Despite wanting to have a child, you have a dependent person you must support for 18 or more years. That changes your life. So as much as there may be joy, maybe the person feels trapped." 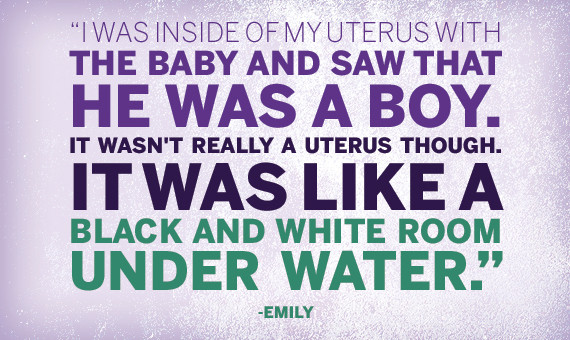 The anxiety of pregnancy can make women imagine the worst case scenario: accidentally leaving her baby unattended. That's a normal fear, Siegel said, and could be a result of the increased responsibility that comes with parenthood. Dreaming something like, "I was changing my child in a changing room at the mall and then I left. Ten minutes later, I realized that I had forgotten my child in the changing room," might just be the psyche's way of conveying that a woman doesn't feel prepared for a baby psychologically. 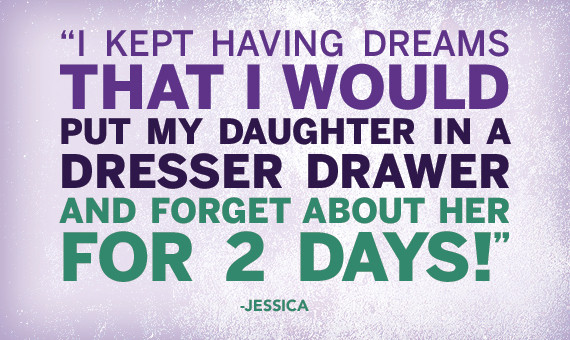 "I always encourage women to try to interpret these dreams on an emotional level, rather than the content level," Nielsen said. "If you abandon your child in the dream, it's not because you are necessarily scheming to hurt your child. It may be more at the level of emotions that you feel. Do you feel competent? Are you too concerned about being a good caregiver?"

7. Nightmares About Physical Harm To You Or Your Baby

Anyone going through a period of uncertainty, fear or change can have nightmares, but unpleasant or scary dreams take a unique form during pregnancy, according to Nielsen and Siegel. Women often dream about having their lives or the lives of their baby endangered in extreme circumstances. 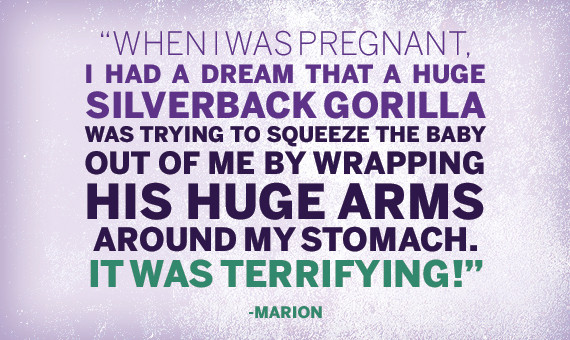 Many times, after expectant moms wake up in a panic, they can pin down specific worries, like Will I be a good caregiver? or Am I going to accidentally hurt my child? Then they can adapt their behavior accordingly -- see a doctor or take prenatal vitamins -- and feel better prepared. 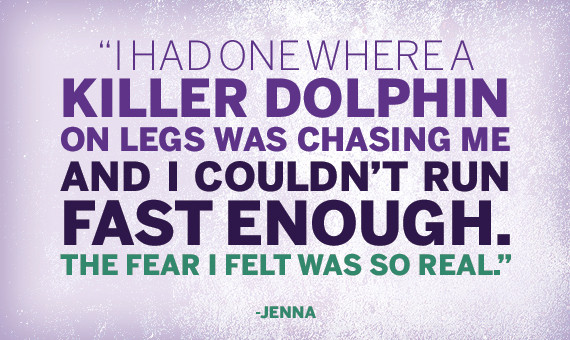 One 2008 study found that nightmares like these may just predict shorter labors with fewer complications. In 2003, a study even found that dreams with masochistic themes are correlated with a decreased chance of developing postpartum depression. While it may seem counterintuitive, scary dreams can make anxiety more easy to manage.

"It's normal to have hostile dreams during pregnancy, because of all of the turmoil you're going through: body, relationship, physical, psychological," Siegel said. "If you can let some of that in and begin to deal with it, you may be able to cope better than if you push it all down." 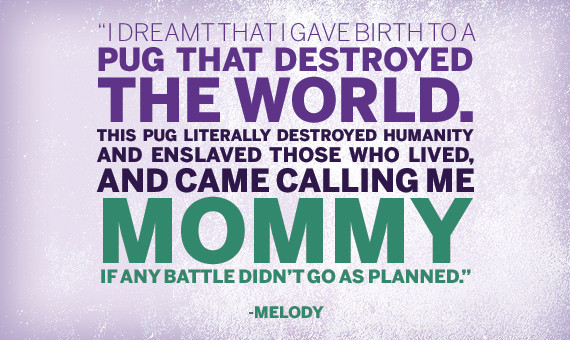 While moderate nightmares can be a good sign of adaptation and coping, extreme and violent repetitive nightmares can be a sign that there's something more troubling going on, said Siegel. If this is the case, he suggested seeking professional help. Nielsen also said that if there is "really serious masochism or sadism" in your dreams, it's best to talk it out with a family member, friend or professional.

More dreams from our readers...