Last week, I cried almost every day because of comments made about my pregnant belly. Because I'm petite (5'0") and this is my third pregnancy, I popped even earlier than with my other two children. At nearly 27 weeks, my belly is large and in-charge. Throughout this pregnancy, I've had a positive self-image, but lately that confidence has dwindled.

Because nearly every day last week I had someone ask when I was due. When I would say in three months, I usually received a "WOW," as in, wow, you are big, and wow, that is a long-time from now, how are you going to make it.

It was always directed at my size. Always. 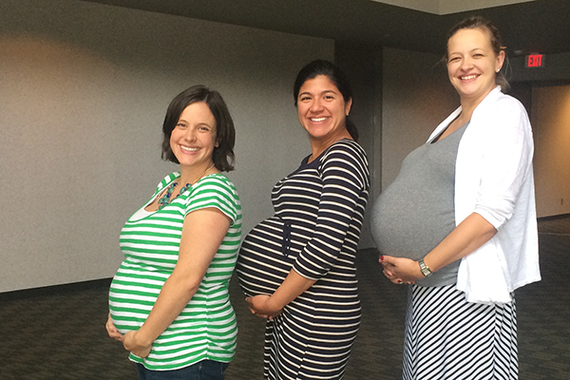 I would respond with a halfhearted laugh and a "yep, guess my body knew what to do this time around" or "downside of being short -- there's nowhere for the baby to go," but inside I felt shame and wanted to cry.

After having two people comment on my belly before 9 a.m., I called my friend Sarah as I drove to work. A petite mama like me who has four kids, I knew she would commiserate. She did, and reminded me that I need to remember that my body was doing what it was supposed to do -- growing to accommodate that beautiful little life being knit in my womb.

I'm not sure why some people feel like pregnancy is an invitation to make remarks about a woman's size, but after three pregnancies, I can attest that this is the case.

Last week, I shared with my husband Matthew about how the comments made me feel. He hugged me, told me I was beautiful and later on wrote on Facebook:

The post generated hundreds of likes and dozens of comments from men and women alike with similar stories. It made me feel better to know I wasn't alone in my feelings of shame and frustration. It also demonstrated that though this has been said before, it needs to be said again today.

Pregnancy is a wondrous miracle that should be celebrated. The changes that a woman's body goes through are intense, both physically and emotionally. During the season of pregnancy, and in the months that follow, mothers should be treated with compassion, through actions and words. Pregnancy is NOT an invitation to remark on the size of a woman.

If you know a woman is expecting and feel compelled to comment on her pregnancy, ask about her or celebrate the baby. Be tender and say things like:

Some might argue that asking about due dates or commenting on a woman's belly are not intentionally hurtful actions, but that isn't the point. What matters is how those comments make pregnant women feel.

When you were pregnant, did you have people say things about your size or state of pregnancy that hurt your feelings? What did they say and how did you respond?

A version of this post first appeared on The Mom Creative.