I had a plan. I have always had a plan. At the age of twelve, I decided I was going to go to Santa Clara University, become a lawyer, and fight against injustice in the world. I also hoped to fall in love and have a big beautiful family along the way.

For the most part it happened. All of it: married my dream boy, became a lawyer, and had three kids all before the age of 35.

I wanted to be done having kids at 35. That was the plan. Done with nursing, done with the big strollers, done with the diapers and ready to start experiencing life through those six little eyes.

As I approached 40 though, my heart seemed to have other plans. A deep-seated tug started pulling at me. I started noticing pregnant women and little babies more and more. As my children started growing at accelerated rates, I started to yearn for those early chaotic days.

I forgot about all of the sleepless nights and inconsolable cries and only remembered the sweet sensation of my newborn falling asleep like a monkey on my chest for hours, the first time my infant grabbed my finger, and all of their sweet breathy voices saying, "I love you."

Things were different now. I was officially "uncool" in the eyes of my twelve-year-old daughter who was embarrassed to be seen with us. My middle daughter started wearing the same shoe size as me and was almost as tall. I found myself clinging to my six-year-old son like a life raft. Everything he did was interpreted in terms of finality: last first tooth to fall out, last kindergarten graduation, last everything.

I was not the only one who felt it either. Two years ago, my husband started asking me for another baby. At first it was a joke, "When are you going to give me another baby," but then I realized that something more serious was going on. Both of us were feeling a loss of some kind. It was the loss of something intangible that had come and gone quicker than we could comprehend it. We could feel it all slip away, and it happened so fast.

My mom always told me that as soon as the kids get to grade school, time starts to go very fast. She was right, and I was not prepared for it. The thought of high school applications and counting down the years until our babies go off to college was almost too much to bear.

I had a plan, but I was so not prepared.

So, I started thinking, maybe I should have another baby? I fully understood that this was a desperate act to try and control something that I could not stop...time. I did the math and if I were to have another baby, by the time my youngest was off to college I would still have a seventh grader. That thought terrified me more than anything. I would have to say goodbye to my plans of traveling to Europe for months at a time when my older daughters hopefully decide to study abroad. Goodbye to the idea of living part-time in Hawaii when all three kids were out of the house to spend leisurely days on the golf course. Goodbye to all of the good things that come when you are empty nesters. I had to snap out of this...I was ahead of the game. I started having kids at 27 and was done at 33. Life was good and we were in the "sweet spot." Our youngest was 6 and our oldest was 12 - old enough to be less dependent on us and not old enough to start getting into serious trouble yet.

I confidently shut the door on all of this crazy "turning 40" talk, and we decided to schedule my husband's vasectomy.

After two re-scheduled appointments, we finally did it. We said goodbye to our childbearing years and went through with the appointment. I cried real tears that day.

Little did I know, there were other plans for me though!

Two weeks later I found out I was pregnant. One week later, I turned 40. Overnight, I turned into Leslie Mann's character in "This is 40." Only, this was not a movie, I was not as funny as Leslie Mann, and this was really happening. 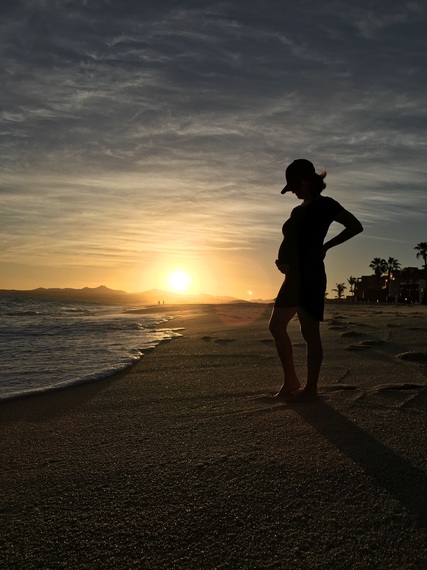 Honestly, I am still in a slightly confused state of denial, fear, and bliss. The reception I have received has been overwhelming. It's true that I will be at my children's school for a total of 22 consecutive years, but I have never felt so much love. My children are over-the-moon excited, and I cannot wait to see my baby take on the role of older brother. A role I never thought he would have in this lifetime.

While I am still terrified at the thought of doing it all over again, I find myself swimming in elated disbelief. Then I feel the baby move, and it all comes back. One of the most beautiful experiences in the world, and I am lucky enough to experience it again for one last time.

I feel almost liberated from my carefully planned life, and look forward to all of the unknowns to come on the other side. Baby girl due in March 2016...wish me luck.