Hey, guys! Are you in the mood for a lot of yelling and dick jokes? Well, if you can't find a Jersey Shore rerun, you've come to the right place. Because this week on Pregnant in Heels, propriety begins to crack like so much Wedgwood china.

Rosie's first client is a "walk-in," which is preposterous, because there is no way that this woman is walking in there for the first time -- you can tell she's got shifty, where-is-the-camera eyes and is trying not to smile knowingly -- but Rosie needs us to know that she gets a ton of walk-ins, okay? So just go with it.

This woman, Robyn, is due to give birth in four weeks and needs to plan a wedding to a man who looks like 1980s Ralph Macchio crossed with Manny from Modern Family. Because even though she's showing more than Janet Jackson at the Superbowl, she wants to try to shove the horse in front of the cart before it's too late. Instead of "shotgun wedding," she prefers the term "LA wedding." (Wait, I thought that was when Tom Cruise makes you sign a contract to ride on his motorcycle, carry his child, and pretend not to be frightened by his crazy off-center teeth.) Anyway, Rosie agrees to make the dress and plan the hitching.

Rosie goes to Robyn's apartment for a consultation, where Robyn tells her that she's been diagnosed with gestational diabetes and has gained 80 pounds. And the clouds part and the heavens open and Rosie's favorite mode of transport, the Judgment Train, chugs down from on high. Rosie is horrified -- HORRIFIED -- that Robyn is so fat, and refuses to believe it is from anything other than poor nutrition. "As a maternity concierge," she tells us with a totally straight face, "my number one priority is the health of the baby." Um, false. You are not a doctor. Your number one priority is getting paid for providing inane services that any normal person, pregnant or no, could do themselves in five minutes. But that doesn't stop the Pope from bringing in a nutritionist to throw out all of Robyn's food and hiring a scary trainer to make her jog and do sit-ups. Now, I realize that I am not a medical professional, but isn't it... unsound to try to force a nine-month pregnant woman to diet and start an extreme exercise regimen? When Robyn tries on her wedding dress, which resembles the kind of nightgown favored by medieval wet nurses, Rosie says smugly, "Who knows what shape she'll be in when she gets married." Is she mental*? Isn't that less than three weeks away? This woman isn't on The Biggest Loser -- she's having a baby.

Thanks to Rosie's medical expertise, Robyn lives to see her wedding day, which is filled with much joy, but before that, with much shouting -- Robyn nearly comes to blows with her mother-in-law, and her small, tuxedo-clad dog is so shaken that he pees on her train. I can't decide which is my favorite part of the wedding, that or LT doing the hora: 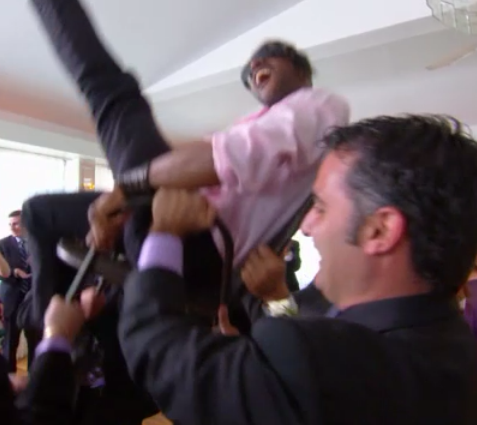 A few weeks later, Robyn gives birth to a healthy (and, technically, non-bastard) baby girl, but Rosie's not done fat-shaming her: 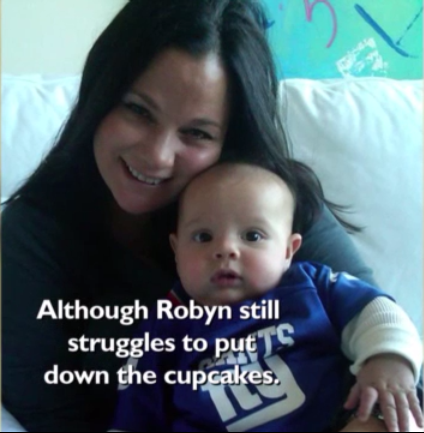 Sigh. There's no hope with Pope.

The second client this week is a woman named Michelle. When Rosie is in the car, assistant Hannah (aka the one who is not the flamboyant gay and who thus receives no screen time) tells her via speakerphone that Michelle "wants to ask her boss to be the godparent of her child." This would not seem to require a third party -- but wait! Michelle's boss is someone named Lord Wedgwood, who makes china for the Queen. He is British, and Michelle needs Rosie's help because "Rosie is British, and a Baroness." Wait, what? I don't know which part of that sentence shocks me more. First, I thought Rosie was a slightly speech-impedimented Australian. Second, this is Bravo. Home of THE COUNTESS DE LESSEPS. If anyone on this channel has a noble bloodline, it is their sacred duty to mention it at least five times per episode.

So anyway, Michelle wants to ask her boss, the Lord, to be her baby's godparent. Rosie decides that this requires a high tea with scones (pronounced "skaans") and spotted dick. Rosie insists on the spotted dick so that she can say "spotted dick" as many times as possible and pretend to look disappointed when Michelle and her gay "day husband," Steven (who for all intents and purposes IS her husband, since her real husband is onscreen for a total of maybe 10 seconds), snicker. But, because I am nothing if not committed to investigative journalism, I asked my friend Beth, who is a real English person, if spotted dick would be served at a fancy tea for a royal. She said it was not a highbrow food and explained that it's usually served for school lunches and would have to be "made from the milk of virgin cows, sprinkled with gold leaf" in order to be fit for a Lord. Ha! The jig is up, Pope. You just like to say "dick" on TV.

In addition to making skaans and dick (which ends up looking like a Le Creuset full of vomit) from scratch, Michelle must purchase a dress for the occasion, which is really just an excuse for the gays to exchange witty barbs:

Steven: "I don't know that she wants to take fashion advice from a man in a jumpsuit."
LT: "A man in a jumpsuit with a waistline that is smaller than yours."
Steven: (obviously burned) "What does LT stand for, little testicles?"

Then they must set up the tea at Belvedere Castle in Central Park, because aside from serving naughty-sounding custard and tiny sandwiches, the best way to honor a royal is to sit them in a public square that is covered in pigeon shit and surrounded by tourists. But of course Lord Wedgwood accepts the honor, because he is on camera and under duress. Rosie wins again. Dick for everyone!

Next week: The Pope adds religious mediator to her resume when a mixed-faith couple go head-to-head over how to raise their baby. This will end well.