Sigh. I could tell from last week's promos that this episode was going to be depressing. It's even titled "Couples Therapy," and it's all about people fighting over things only tangentially related to their future offspring. Which isn't anything that hasn't happened before on this show, but gah. I want to watch rich pregnant women with outlandish, narcissistic demands, not marital woes. Give me someone who wants to fit her baby boy with a toupee because she hates baldness. Give me someone who wants a life-sized bronze sculpture made of her 38-week uterus. Give me someone so vain that she wants to bleach her linea negra. I don't care, Pope, just give me someone with superficial problems. I don't want to see real pain. If I wanted to see that I'd be watching 16 and Pregnant, or that horrific Biography series, I Survived (Have you seen that show? It's like MTV True Life: Saw. Someone actually had a knife hammered into her head.)

Rosie's first clients this week are Diana, a southern blond, and Ashley, an Englishman, who live in a two-bedroom on the Upper West Side with their daughter, Khloe (what hath the Kardashians wrought?!?) Diana is convinced that they need to move into a bigger apartment; Ashley wants to stay put. Somehow this debate fills 20 minutes of airtime. Since securing a new residence does not fall under the Pope purview, Rosie hires a real estate agent (I swear, instead of "maternity guru," she should just call herself "expensive yet useless third party." I'm waiting -- WAITING -- for the episode in which a pregnant homemaker wants to have a water birth but can't because her bathtub drain is clogged, necessitating a Pope-approved plumber). She also brings in an interior decorator who says he can transform Khloe's room to accommodate the new baby while still maintaining each child's individuality. The big suspense is supposed to be who will win out -- space-hungry Diana (haha, that just made me picture her floating around in space, eating asteroids like Pac-Man!) or stay-put Ashley, and because I hate spoilers I won't ruin it for you.

KIDDING! Who cares? It's Ashley. ("We Brits tend to win," Rosie says. "Except for that big war we lost.") Diana is pissed, but I bet she gets a five-figure push present. The interior designer covers the girls' bedroom in pink and purple (seriously, it looks like Abby Cadabby was on a suicide bomb mission in there), which, I guess, counts as distinguishing their personalities. The new kid is named Magnolia, by the way, Lola for short, even though that makes no sense. Shouldn't it be like, Nola? Or Magno? Eh. Moving on.

The second couple of the week, Rebecca and Patrick, are the real downers. Rebecca is a former opera singer (now, presumably, stay-at-home mom) who qualifies as a "cougar" at 32 because her husband, Patrick is only 24. Rebecca has a daughter from a previous relationship, a one year-old son with Patrick, and another on the way. She's freaking out because Patrick, a nutritionist, is never home and never helps and never listens. Patrick is freaking out because his cougar wife yells at him all the time. (He even gained 80 pounds from stress! But then lost it, because no one wants a fat nutritionist.) Basically they are fighting constantly, and Patrick wants to go to marriage counseling. But Rebecca wants to go on Bravo. Guess who won?

Rosie does her due diligence as the expensive yet useless third party she is and brings in a therapist, "Dr. Debbie." (I don't know about you, but I would not trust a one-named therapist unless she was practicing on Sesame Street. Well, unless it was Dr. Cher. Then maybe.) Dr. Debbie wisely notes that Rebecca doesn't let Patrick get a word in edgewise, while Patrick doesn't really listen to Rebecca. "I just feel like she doesn't love me all the time," Patrick finally sighs, staring down at his guns. And look, I feel for them, but this is like the opposite of naked horseback posing.

The good news is that after one therapy session, they are cured! Rosie takes Rebecca to sing some opera and makes Patrick do jump squats in Central Park, and they all lived happily ever after.

Also, the Pope is pregnant! It's a miracle! To celebrate I have compiled my most favorite shots of Rosie listening to Hannah on speakerphone in her Town Car. You are welcome. 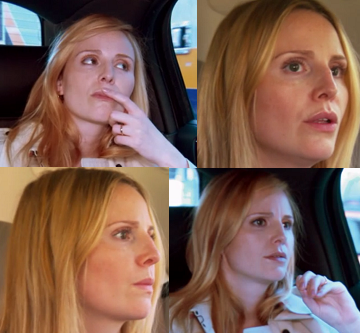 Next week: A high-maintenance mom-to-be puts potential nannies through a bootcamp (now that's more like it), and Rosie coaches a terrified stay-at-home dad.