I am not one to blow things out of proportion (and believe me, I am well aware many people fared way worse than I did during the storm), but there is something about being 38 weeks pregnant during a natural disaster that made my brain jump straight from hurricane to "end of the world."

In the days preceding Hurricane Sandy, I thought a power outage would be a huge inconvenience, a tough thing to tackle with a toddler, and a serious BITCH to deal with if I went into labor, but I did not think about what it would feel like to be totally cut-off from the outside world with no TV or internet access.

At around 8pm Monday night, our lights went out, taking our wireless with it, and from that point on, we had pretty much no idea what was going on. At some point, Mike brought out a "hot spot" with very little juice left, which I used to go on Gothamist and see a picture of 9th Street and Avenue C completely overtaken by water. I cannot stress how close that is to my apartment.

Then I checked Mayor Bloomberg's Twitter feed and he said something like, "There are 10,000 911 calls being fielded every half hour and there is no way for us to answer all of them."

That's when the hotspot died and I went into serious DOOMSDAY MODE. 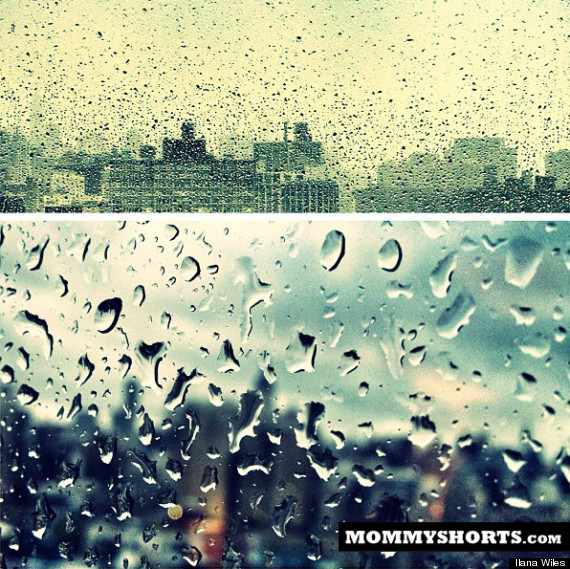 First I thought about who I would call that could potentially talk Mike through birthing our child. And then I wondered about people who give birth at home or in cars or similar situations and all I could think about was -- what the hell happens to the umbilical cord??? Does somebody cut it? Or does the child remain attached to it until they can get medical assistance?? Either scenario seemed totally repulsive.

When I wasn't thinking about the possibility of giving birth on my kitchen floor, I was imagining the water rising so high that it totally covered Manhattan, eventually causing our building to collapse into the sea.

In between emergency labor and scenes from Deep Impact, I was thinking things like -- "we don't have nearly enough water to last us more than a day or two," "Mazzy is going to LOSE HER SH*T once the milk spoils" and "WHY DIDN'T I SHOWER WHEN WE STILL HAD RUNNING WATER????"

Oh, apparently when you live in a building over a certain height, your water is controlled by an electronic pump. Learn something new everyday!

Speaking of height, we live on the twelfth floor in an area where there are few high rise buildings. Meaning we have excellent views of Manhattan. Which is awesome on a regular day but during a black out, it is downright CREEPY. Here was our view of downtown Manhattan as of 9pm Monday night. That tall building is One World Trade, which went out about an hour later. 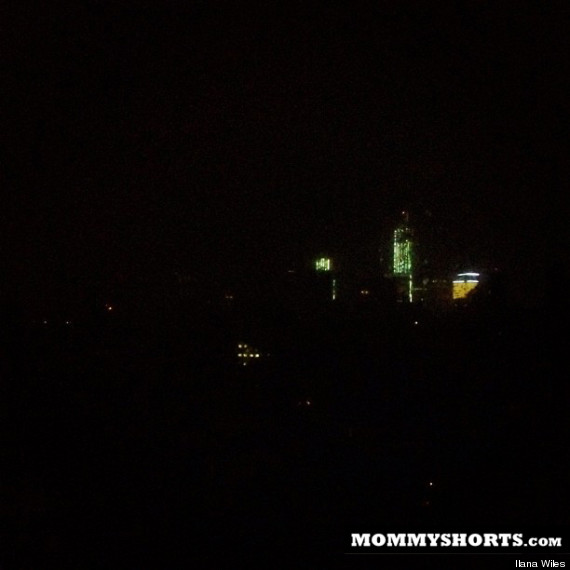 Also, our building is L-shaped which gives us exposure on three sides. This means the wind wraps around us and creates a howling noise even on a normal day. Add hurricane winds moving at 90mph and the sound is downright TERRIFYING. Plus, the building was creaking in ways I have never heard it creak before, interrupted only by passing ambulence sirens, and the chandelier over the dining room table was shaking continuously.

My soundly sleeping husband certainly wasn't helping matters. I believe I even yelled at him to wake up and console me or else WHAT WAS THE POINT OF HIM NOT GOING TO SAN FRANCISCO???

Truth be told, if Mike hadn't been there, Mazzy and I would currently be hugging each other for dear life inside my closet, instead of where we are now -- safely nestled at a friend's house on the Upper West Side.

Tuesday morning, we woke up to the lovely vocal stylings of our daughter demanding to watch television.

As feared, Mazzy did not take the lack of technology in stride. She wanted Netflix and iPad access and warm milk and hall lights left on and there is only so many times you can tell a toddler that things are JUST NOT WORKING. (Although, it was kind of funny when I gave Mazzy a handful of chips and she responded with, "Chips are WORKING?!")

At some point, Mike magically produced an emergency radio (where the hell had that thing been the night before??) and we listened to Mayor Bloomberg tell us just how bad things were.

We also found out power existed above 38th Street.

So we called our friends on the Upper West Side from our land line (have I mentioned that AT&T on our cell phones wasn't working either?) and arranged to shift our brood uptown.

Once there, we showered, ate a homecooked meal and finally watched footage of the disaster on television. We found out power probably won't be restored for four more days, meaning no electricity, heat or water until at least Friday. We also were able to call family and friends and make sure everyone is okay. Unfortunately, we are still waiting on a couple of responses.

As for Mazzy, she was more than thrilled to be reintroduced to a microwave and cable, and spent the evening playing computer games and watching Toy Story 2 with 3-year-old, Charlie. 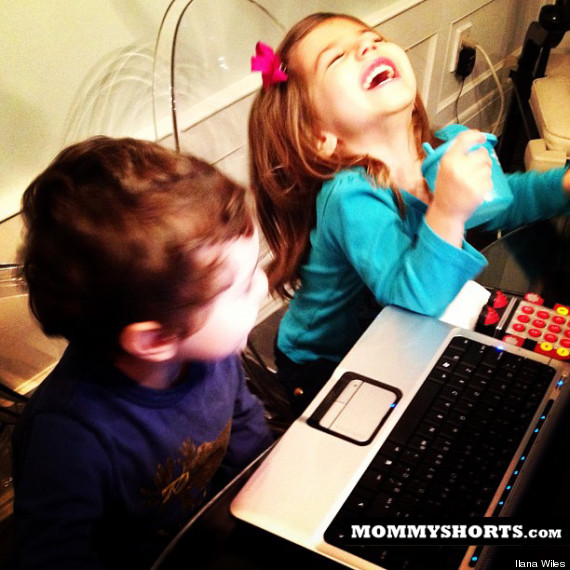 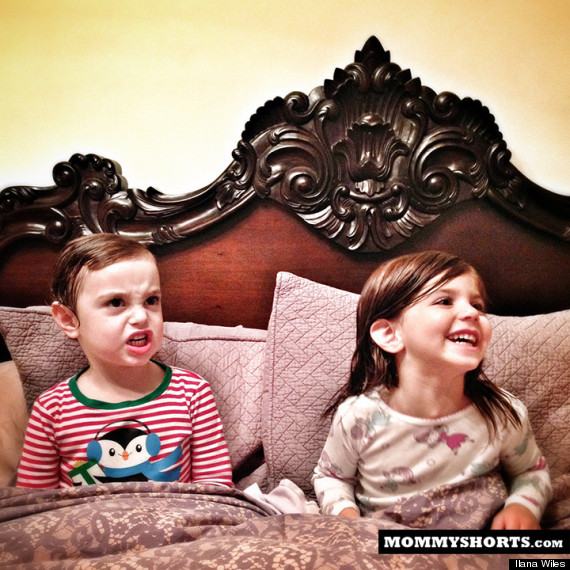 She really knows how to make herself at home, doesn't she?

I hope everybody reading on the East Coast is somewhere safe and that any damage was minimal. I am thinking about all of you today!

More:
hurricane-sandy-new-yorkToddlersParentsNew York Citysuperstorm sandy
Newsletter Sign Up
Raise the kind of person you'd like to know
Subscribe to our parenting newsletter.
Successfully Subscribed!
Realness delivered to your inbox

Founder of MommyShorts.com, author, and mom of two.