A Republican state representative in New Mexico introduced a bill Wednesday that classified abortions for rape victims as "tampering with evidence," effectively requiring women to carry their pregnancies to term in order to prove their case in a sexual assault trial.

This bill will not pass, as Democrats control both chambers of New Mexico's state legislature, but there are plenty of other state laws that extend the nightmare for women who are impregnated through rape.

Of the 26 states that require a waiting period (usually 24 hours) for women seeking abortions, only Utah makes an exception for cases of rape or incest. Pregnant rape victims in some states must also undergo counseling about the negative effects of abortion before having the procedure.

If a woman who conceives through rape does go on to have the child, she can open herself up to being victimized by her rapist again and again. In 31 states, paternal rapists are allowed to sue for custody and visitation rights like any other father, as a Chicago woman who was served with custody papers from her rapist brought to the public's attention last summer after former Rep. Todd Akin (R-Mo.) made his "legitimate rape" comments. 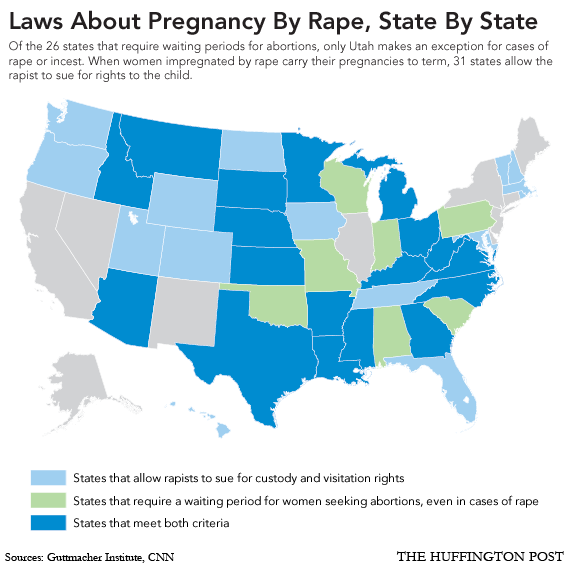 Even in the states that don't protect the parental rights of rapists, many rapes never lead to a conviction and certain provisions can make it difficult for a woman impregnated through sexual assault to keep her attacker out of her and her child's life. Mother Jones reports:

But of the 19 states that have laws addressing the custody of rape-conceived children, 13 require proof of conviction in order to waive the rapist's parental rights. Two more states have provisions on the issue that only apply if the victim is a minor or, in one of those cases, a stepchild or adopted child of the rapist. Another three states don't have laws that deal with custody of a rapist's child specifically, but do restrict the parental rights of a father or mother who sexually abused the other parent.