It's tough to be pregnant in heels!

But that didn't stop Nicole "Snooki" Polizzi from sporting some vertiginous platform wedges when the "Jersey Shore" gang returned to Seaside Heights Thursday to begin filming the series' sixth season. It looks as if the pint-size star, who is expecting her first child with fiance Jionni LaValle, lost her balance due to the curious choice of footwear and came close to taking a tumble.

Other cast members who moved back into the shore house include Mike "The Situation" Sorrentino, Ronnie Ortiz-Magro, Sammi Giancola, Deena Cortese, Paul "Pauly D" DelVecchio, Vinny Guadagnino and Jenni "JWoww" Farley, who will co-star with Snooki in a separate spinoff this summer. (For the record, all appeared to be carrying proper suitcases, rather than trash bags a la Angelina in Season 1).

In a recent interview with V magazine, the expectant guidette got candid about her feelings on motherhood. "I can't wait to meet my kid!" she said. "Everyone will be surprised to see a different side of me. I'm loving, caring, sensitive, protective and very maternal, no matter what people might think." 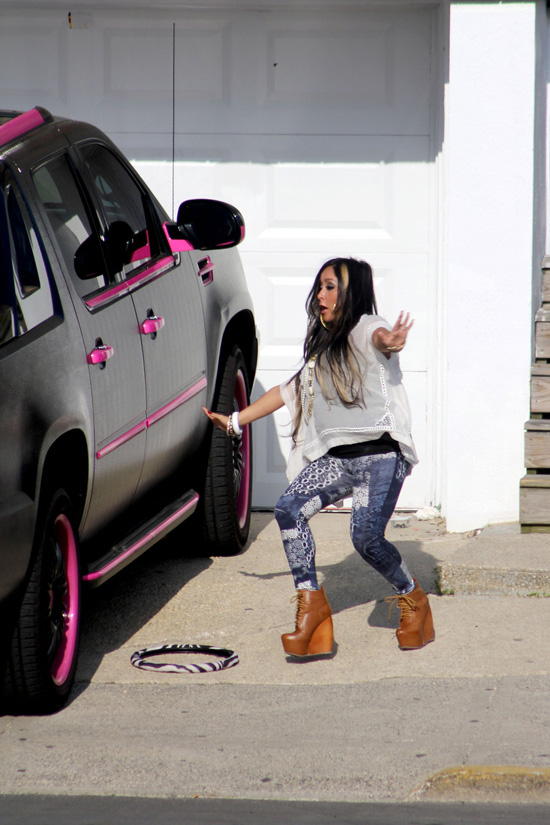 PHOTO GALLERY
Snooki Over The Years
Download
Calling all HuffPost superfans!
Sign up for membership to become a founding member and help shape HuffPost's next chapter
Join HuffPost