It's nice to know that thousands of years ago, human ancestors also sought comfort in food.

That's the conclusion of a group of researchers studying men and women who lived in the caves of Mount Carmel -- not far from what is now Haifa, Israel -- between 15,000 and 11,600 years ago. Known as the Natufian civilization, this culture has been the subject of an extensive study by an international group of archaeologists, who have discovered dozens of skeletons in the area.

One of the most recent studies of the cave dwellers, slated to be published in the December 2013 version of the Journal of Anthropological Archaeology, includes evidence that Natufian men engaged in large communal meals next to grave sights, reports Israeli news outlet Haaretz.

Led by Haifa University's Professor Dani Nadel, with the help of colleagues Dr. Reuven Yeshurun and Professor Guy Bar-Oz, the archaeologists searched a location known as the Raqefet Cave and uncovered thousands of small animal bones they believe are evidence of feasts not unlike modern wakes.

The Natufian people during the time period studied were undergoing an important transition from being hunter-gatherers to living communally. These wakes potentially represent the fascinating, fledgling attempt at unity by a previously nomadic culture, Yeshurun told The Huffington Post in an email.

"From the beginning of human evolution humans lived in small groups and rarely met other groups, and were probably not used to dealing with dozens of 'neighbors' on a daily basis," Yeshurun wrote. "Such a society would try to form ceremonies and rituals that can unite the large group and resolve tensions. And a 'wake' in the occasion of deaths of group members could have been perfect for that. To this day, food is a very uniting social mechanism, as you know."

Archaeologists have also discovered evidence of burial feasts at other dig sites in Israel; thus, a find like the one outside Haifa is not unprecedented, Yeshurun said. However, researchers in the Natufian caves had to prove that the animal bones they uncovered were not simply leftover garbage and were indeed related to the graves.

"I approached this problem from a garbage point of view," Yeshruun explained. "Having studied the trash patterns at the Natufian villages, I noticed that the Natufians were not really clearing food remains from their houses. As a result, those food remains (animal bones) got constantly trampled and burned when people were stepping there or lighting fires. The bones in the Raqefet Cave graves do not show this pattern; they are significantly less broken and burned from ordinary Natufian 'domestic trash.' Therefore I think that they are not the remains of an earlier occupation. They are connected with the burial."

Yeshurun added that the fact that no stray animal bones were found outside the graves added further evidence supporting his conclusion.

This study is related to a similar Natufian discovery that made waves in the archaeological community earlier this summer. In June, Nadal announced that his team had unearthed what appeared to be some of the oldest grave flowers ever found in a cave burial. Carefully positioned, the flowers "added color and fragrance, and probably all those at the funeral were impressed," Nadal told NPR at the time. 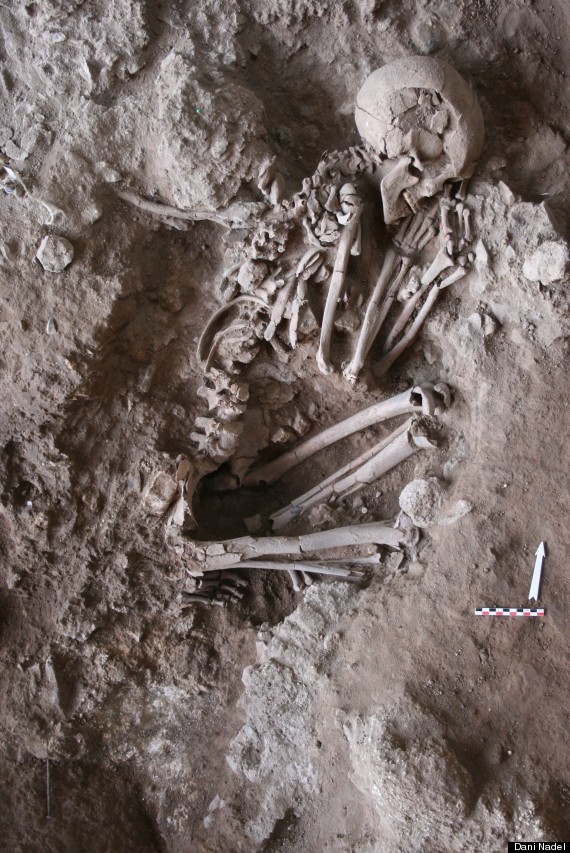 One of the Natufian burials unearthed by the team of Dr. Dani Nadel in the Raqefet Cave in Israel.