This week, the New York Times Magazine featured John Barry and his brainchild, the lawsuit against 90 oil, gas and pipeline companies filed in New Orleans. Barry filed the unprecedented lawsuit while he was a commissioner with Southeast Louisiana Flood Protection Authority East (SLFPA-East), a new form of empowered levee board created after Katrina.

The suit got another green light on Monday when Judge Janice Clark ruled that Act 544, a piece of midnight legislation pushed by Governor Bobby Jindal to halt the suit, does not apply to the Authority.

Representing Levees.org, I stood in immediate unqualified support of the "Big Oil Lawsuit" when it was announced in July of 2013, and I demonstrated alliance for the next twelve months to that quest. So naturally, I've been present at SLFPA-East meetings to show support for commissioners in favor of the suit which alleges that the oil industry broke the law and did not remediate their damage to protective wetlands.

But, one meeting stood out among the others this past summer because the President of the Authority, in his opening remarks, was being remarkably candid.

President Stephen Estopinal, board member for more than four years, was saying that "the Authority had no authority" and was describing a litany of examples where the SLFPA-East had objected to and pleaded for concessions by the Army Corps of Engineers' designs and plans but had been ignored. Here are just a few examples:

President Estopinal also pointed out, rightly, that the Authority is not the local sponsor of the new construction. Barry echoed that in the New York Times article and went further by saying the authority could not write policy, enforce law or mandate levee construction. It could only serve as a consultant.

The people of Louisiana should be appalled. Remember after the levees broke in New Orleans, there was a popular belief that local levee officials were not paying attention to flood risk and so a new form of levee board governance was passed by 80% of Louisiana voters "to hold the Corps' feet to the fire?" 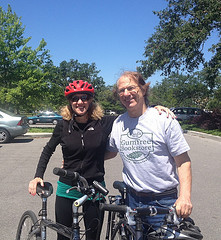 "Today's Authority would have recognized that the Corps plans to raise the outfall drainage canals with I-walls instead of installing gates was a mistake," Barry told me last May during our annual levee disaster bike tour.

But even if the pre-Katrina levee board had indeed recognized that the Corps was building flood walls that would soon doom the city, there was nothing the commissioners could have done. They could only consult.

Before Katrina and the levee failures, the Corps had the final say on all design and construction issues. And as we all know, during Katrina, the Corps-built floodwalls along the outfall drainage canals, floodwalls that protect the portion of the city with the most people, property and infrastructure, collapsed a shocking 50% below design loads.

A transcription of the official public record can be found here.