Prophecy is central to the work of the four artists that comprise Prelude to an Apocalypse: Landscape in an Era of Diminished Expectations at Pedersen Projects. The show's conception of the artist-as-Cassandra suggests a nice twist on the now-defunct trajectory of forward-looking Modernism, by which the progressive artist was to herald a Brave New World braced with scientific and technological innovations. A century later, however, saddled with war - two great ones, a couple dozen genocides, not to mention innumerable regional conflicts - man-made, environmental destruction, and Malthusian overpopulation, the prospect of utopia is more a wet dream than plausible hope. Instead of distilling dystopian despair into their work, Lisa Adams, Amir H. Fallah, Wendell Gladstone, and Greg Rose incorporate responses to contemporary landscape that range from a big, fat whatever! to Peggy Lee's croonable "If that's all there is, then let's keep dancing, bring out the booze and have a ball." With keen insight and incisive humor, these responses describe our tendency to fear for the worst, while, at the same time, fertilize the landscape tradition with pragmatic reality checks, thus proving, that if art isn't necessarily an oracle, it's still a two-way mirror on the human condition. 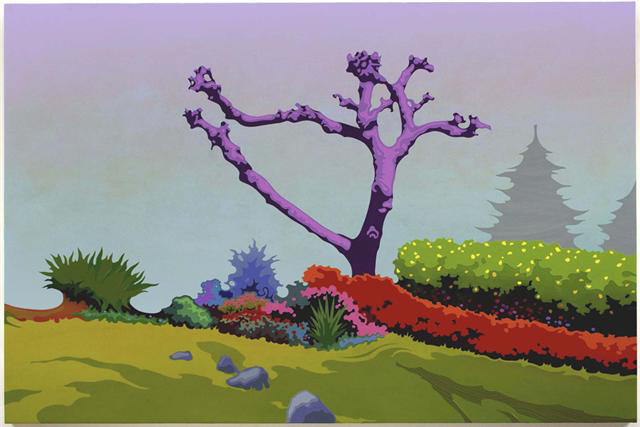 Each artist administers a Rorschach Test on the world around them. Subjective as can be - each artist has a distinct aesthetic - the show as a whole nonetheless seems like the most obvious, inevitable thing in the world. The overall tone of the work seamlessly balances cartoony playfulness with an overarching sense of unease and disquiet. The forms are lyrical but their space is impenetrable and they're colored in a minor key, acknowledging a discordant status quo while, at the same time, laughing at it in a non-judgmental manner. The show is firmly rooted in the landscape tradition: bands-of-color creating horizon lines abound, as do variously rendered skies and species of floral and fauna. But it's not Audubon naturalistic, to say the least. It's more that landscape is an occasion for which the assembled artists convene to collectively thumb their noses at whatever imminent sense of doom the future - hell, the present, too - presages. 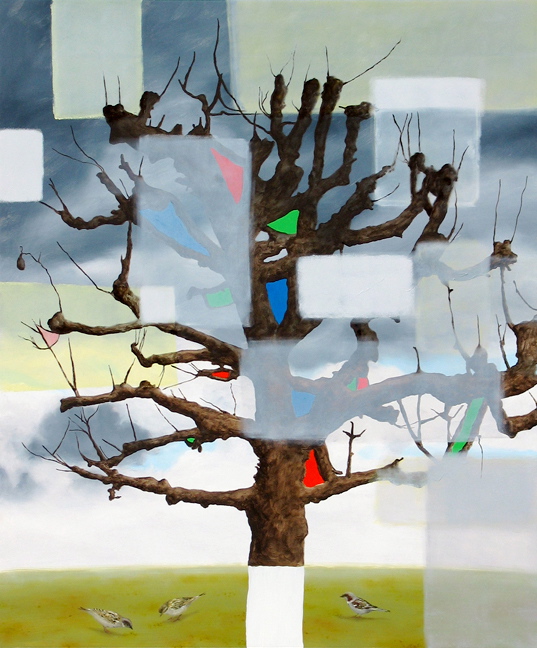 The title refers to art that no longer foregrounds utopias in the landscape tradition but rather uses the tradition to spoof our knee jerk reaction to find apocalypse around every corner. The work addresses the role of art divested of its oracular function, that is, of art's responses to an era of diminished expectations, suggesting that we're hardwired for skepticism and doubt, for doom and gloom. Whether it's the kerfuffle with the Mayan calendar ending at 2012, some guy wearing a sandwich board on Wilshire, or the palaver on late night AM talk radio, the attitude derives from a secular - not a biblical - attitude that's embedded in our collective psyche. This attitude declaims that some End is always Near, the oleaginous Gulf of Mexico notwithstanding. The show then, is apocalyptic without being apocalyptic, using humor to show both genuine concern for the environment at the same time it mocks the possibility of monumental landscape. 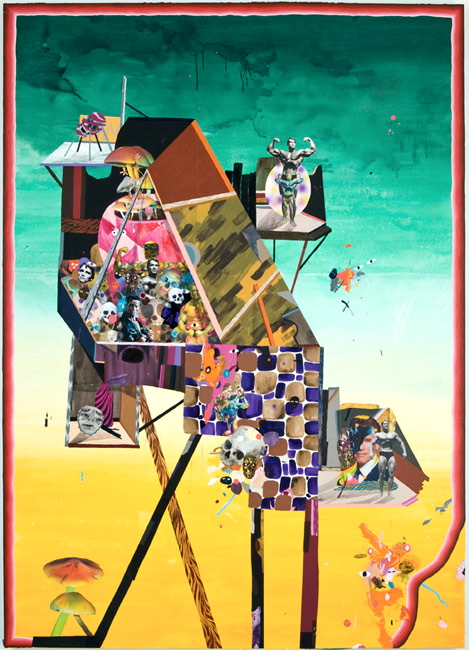 The show demonstrates that the landscape tradition is still artistically fertile, though that tradition is blighted at the inspirational level by environmental and other man-made concerns. Hardly bearing good news, these artists nonetheless record - bravely, courageously, and with analgesic humor - the disjunction between hope and experience, of despair with the world-as-is. The work begins as a reaction to the world but concludes as a testament to our proclivity to make apocalyptic mountains out of hard-wired, human nature molehills. 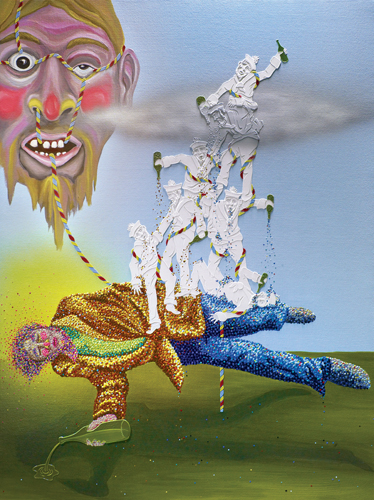 Though the works don't necessarily form a coherent narrative they do posit a range of responses to a cacophonous world backlit, mostly, by environmental concerns. This spectacle of unease - of an artist's ability to find inspiration and humor but not much comfort in the landscape tradition - as well as the peculiar circumstances that have engendered these conditions suggests that the best artistic recourse is to ask, as Okakura Kazuko does in "The Book of Tea," "How can one be serious with the world when the world itself is so ridiculous?"