On my way home from work one day a couple of weeks ago I was reading as usual one of the evening newspapers on the Tube. One story by Anna Davis in particular caught my eye. "Mums scramble for London nursery places when they are just 12 weeks pregnant: One even tried to register BEFORE she had conceived."

My first reaction to the story was bewilderment. I discussed this with my neighbor on the crowded Tube home. She giggled. Another person shook her head in disapproval.

The reactions of the readers on the Tube are an important hint that something unsettling is happening which deserves our attention.

It is nothing new that parents in London go to extremes to enroll their children in the "right" school. Everybody who has lived in London long enough has heard a friend's or relative's story of Londoners moving neighborhood to get their children into a good school, of attending church in order to secure a place for their child at a faith-based school, or of parents renting a house somewhere in another neighborhood or changing their address to their parents' home in order to be eligible to sign up their kids to school in the catchment area, or other extreme tactics to get a child into what it is consider a good school.

But registering children to nursery before they exist really seems to be the extreme, and raises many ethical questions.

The first one relates to the non-identity problem developed by British philosopher Derek Parfit. The problem was originally formulated in a different context (you can read more here if you are curious) but in this context it can be explained quite simply as follows: at least one mother, according to the article by Davis, registered a child before conceiving. When her child will come into existence, s/he will be a different child from the non-existent one the mother had registered to nursery. Will the registration still be valid? There are grounds to dispute that.

But moving beyond this quite abstract conundrum there are other ethical issues that deserve our reflection. Let us look at motivation. Why are parents doing this? The article mentions the "fierce pressure" on primarily mothers (the uneven pressure on only mothers reported by Davis would also deserve societal attention) to win places in top London nurseries. Women who wait until they conceive may be put on a waiting list. As the article by Anna Davis reports, there are even nurseries consultants who, for a fee of £300 an hour, advise parents on which nurseries they should sign up their children to, "in the belief that choosing the right nursery is the key to their child's future educational prospects."

Mothers (parents) are also doing this to make their children successful (or at least, they hope, to give their kids a chance at being competitive) in a society where class and social status are powerful forces of economic mobility. This drive for competitiveness is evident in other societies, such as the U.S. (where competition for preschool enrollment in New York is driving prices beyond the reach of all but the top 1%), but it is particularly evident in U.K. society, where class divides are more evident. This drive towards early competitiveness pre-nursery school, and beyond before the child's existence, exacerbates the already growing inequalities in the U.K. society.

I must now offer two disclaimers.

The first is that I am not British by birth. I am Italian but like to all myself "European", and have been working and living in the U.K. for more than five years. Because I am not British by birth, I am foreign to the "class games" in the U.K., but if I were to have a child in this country, the child would be enmeshed in these class games. (To be fair, other European societies have social classes, but to anyone who's read Watching the English by anthropologist Kate Fox, the U.K. probably takes the cake.)

Second disclaimer: I do not have children yet but reflect on children and ethics for my professional work, discuss the topic with colleagues and friends, and think about these questions with my husband as we reflect on the possible future that we might want for our children and for us. We ask ourselves: would we want to register our children to nursery before they exist? We feel very uncomfortable about this. We also ask ourselves: would we even want to raise our hypothetical children in a country where social forces drive such fierce competitiveness?

Some of the parents interviewed in the article conveyed the message that even if they felt uncomfortable to varying degrees about it, they felt they had a duty to do it, because that is what a "good parent would do". As a mother interviewed by Anna Davis wrote: "Applying for nursery is a stressful time. If it's not done properly you feel you have done something wrong. It's one of the first decisions where you are tested as a parent".

If these are the rules of the game, parents need to play tough.

Other examples in our society of competitiveness and early professionalization of children abound. One from my own area of research is direct-to-consumer genetic tests to scout out a child's potential for sport, or for music. This is something I have been working on for some time now (see here, and here) and I agree with American bioethicist Dena Davis that these tests could be seen as a wake up call towards other domains - as in, for example, enrolling non-existent children in nursery schools.

With my "bioethicist" hat on, I might pose the following question: what would a good parent do? American bioethicist Rosalind McDougall has tried to provide an answer to this question in relation to questions of reproduction, and of use of genetic technologies such as preimplantation genetic diagnosis to choose children's traits (you can read her article here). She has spelled out three virtues that a good parent should have: the virtue of accepting (to accept whatever child you may have), the virtue of being committed (to commit to nurture their children, including their children's talents), and the virtue of future-agent-focus (understood by McDougall as promoting the development of children and making decisions for them when they are not yet autonomous agents).

Let us apply these virtues to the case of parents signing up their children before they even exist to nurseries. While it may be difficult to argue whether parents are accepting of whatever child they will have, they seem definitely to be committed to their children's future and have a future agent focus. Hence, we could conclude, they are acting as virtuous parents.

But if we limit our analysis to these virtues we would leave out an important part of the picture, i.e. our societal attitude towards the child. What can this drive towards early competitiveness tell us about our conception of the child?

As Philippe Aries wrote more than fifty years ago in his beautiful book Centuries of Childhood the child is a relatively new concept for humanity.

The Middle Ages did not have "children" as we know them today. Children were "specialized little adults". This is evident also in the history of artwork of that time and even through the 19th century, where children were depicted as adults "on a smaller scale", including how they were dressed - in miniature adult clothing (see the painting by Georges August Baker below). 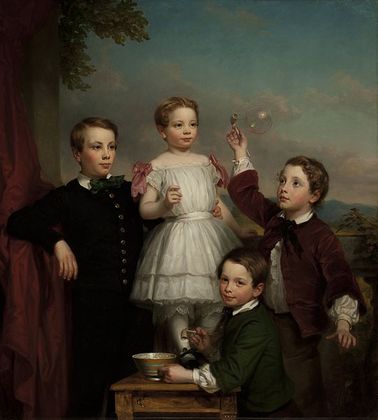 Portrait of Children by George Augustus Baker Jr, 1853. This file is in the public domain because it has been released by the Los Angeles County Museum of Art www.lacma.org with its "Public Domain High Resolution Image Available" mark.

We had to wait until the 20th century to see children being given - at least in theory - rights to "rest and leisure, to engage in play and recreational activities" (see article 31 in the United Nations Convention on Human Rights of the Child).

Now, at the risk of sounding radical, I think the practice of registering a child to nursery before s/he exists warrants a serious reflection in our society to the space we give to children, and how we consider them. I am only opening here some questions which I do not pretend to be able to answer in this piece, but which I think need to be addressed: may it be the case that we are reverting back to seeing the child as a "specialized little adult"?

As I have been writing elsewhere in relation to direct-to-consumer genetic tests for talent scouting, I think that good parents need to put the accent on the present, on the "hic et nunc", on the wellbeing of the child that is in front of them now, not only on the future success of the child.

I recognize that individual parent may find themselves in a sort of catch 22: either you play by the tough rules of the game, or the child (your child!) will be at a disadvantage. (Or, a third option to get out of the two horns of the dilemma: you leave the U.K. and move to Scandinavia!)

This is not a problem that can be solved by the initiative of a single parent. It is a symptom of the widening inequality gap in our society, and of - as I have hinted above - an understanding of the child that may actually be reverting back towards an "adult in miniature".

As reported by Umberto Eco in The Name of the Rose, laughter is important to make us reflect on truly important things. The giggles elicited by the article I read on the Tube betray a deeper awareness of something unsettling going on. With this essay I hope to have started a necessary discussion which concerns all of us, existent and non-existent.