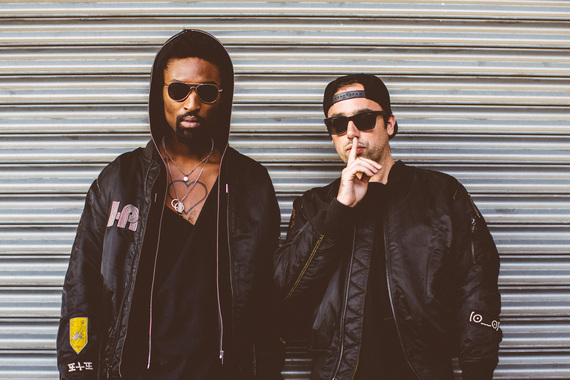 The Knocks are one of the best bets for what's next in pop music, as their eventual ascension to superstardom is all but secured. There is no production duo crafting catchier, stickier, or, to put it bluntly, better pop tunes in business today, and yet they remain one of the best-kept secrets from the masses.

After a long ramp up and many years of honing their sound and growing their fan base, the New York City-based twosome released their debut full-length album 55 last year to rave reviews and the glee of their expectant fans. It's only been a few months since the CD made waves, but already The Knocks have changed it all up, giving their own songs new sounds and reimagining everything they just spent so much time creating in the first place.

Today, the band releases 55.5, an EP of remixes of the songs originally featured on 55. Remix EPs are nothing new, but this is different. Instead of reaching out to some of their favorite producers and remixers, The Knocks remade all of these songs themselves, turning each tune into a brand new piece of art.

In addition to giving me the pleasure of premiering the 55.5 remix EP in its entirety, the band answered a few questions for me. Check out their thoughts below...as you listen to their new collection, of course.

Why remix your own album yourself?
We have always been very connected to the DJ and dance communities as we are DJs ourselves, so we wanted to create spinnable versions of some of the less dance-driven material on 55.

What do you want people to take away from these remixes that they didn't get from the album?
These remixes bring a whole new energy to the originals. Our mentality going in when we decided to do this EP was to make edits that you could dance to in any club environment or at an after-party. It's a whole new vibe and we are happy with how they turned out.

Do you guys have a favorite remix from this grouping?
Not sure about a favorite, but we had a blast making the "Love Me Like That" remix featuring Carly Rae Jepsen. We love spinning it in our sets and we even performed it live with Carly at Governors Ball. The crowd reaction has been amazing.

Any favorite remixes you've done for other artists?
We did a remix for Of Monsters and Men's song "Little Talks." Unfortunately, it came out but was taken down a day later. So it goes...

What does the rest of 2016 have in store for The Knocks?
We are playing some big summer festivals in the US and then head to Europe in the fall for a tour. We are also putting out a few more remixes and have new original music on the way. We are always creating.