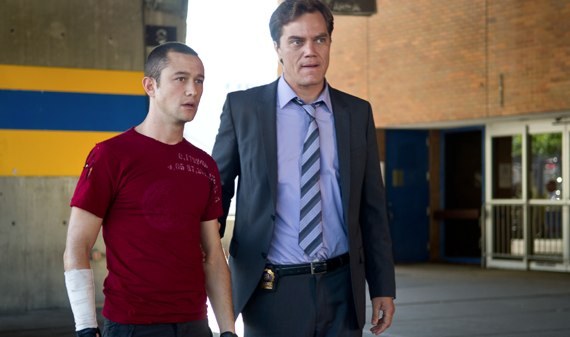 As you read this, Premium Rush, starring Joseph Gordon-Levitt, is playing at many theaters in your general vicinity. Though, the security team at these theaters will not let you watch Premium Rush unless you give that theater a predetermined amount of legal currency. Should you exchange your hard earned currency to watch Premium Rush? Ahead, as always, we ask and answer every possible question that you could have about Premium Rush.

Q: How does Premium Rush begin?

A: Premium Rush begins with a shot of Wilee (Gordon-Levitt) flying through the air in slow motion after being involved in a traffic accident. The film then time shifts a few times showing events that happened earlier in the day.

A: The events of Premium Rush take place over the course of one day as opposed to 500. But, a clock is shown multiple times to let us know what point in the day we are watching. So, it's more like (1) Day of Summer.

A: Wilee is a graduate of Columbia's law school who never took the bar exam because he enjoys the thrill of being a bike messenger. Unfortunately, he makes very little money in this occupation.

Q: Is Premium Rush the story of Wilee's internal conflict between chasing his dreams and being responsible?

A: No. Basically it's just Wilee being chased by a cop named Detective Robert Monday for an hour and a half.

A: Because Wilee was assigned the rushed delivery of a package from his dispatcher (Aasif Mandvi) -- a package that Detective Robert Monday (Michael Shannon) wants very badly.

Q: Is this the same stickler-on-time-delivery-assigner that Aasif Mandvi played in Spider-Man 2?

A: In Premium Rush, Mandvi plays "Raj." In Spider-Man 2 Mandvi played "Mr. Aziz." So, I like to think the character's full name is Raj Aziz and that this is very much true.

A: No, just a ticket of some sort that is worth a lot of money in the Chinese underground of New York City.

Q: OK, so Detective Robert Monday is investigating someone in the Chinese underground of New York City and he needs that ticket for evidence?

A: No, you're thinking of a movie that might make a little more sense. You see, Detective Robert Monday has a nasty habit of losing money while playing pai gow. So, Monday needs that ticket to pay off his gambling debts. That's it.

Q: So Detective Robert Monday could have just robbed a bank or shaken down a drug dealer instead?

A: Yes, but then Premium Rush would contain a lot less bicycle tricks.

Q: Does the name Detective Robert Monday make you giggle every time you hear it for unexplainable reasons?

Q: Do you laugh when you envision Detective Robert Monday being introduced by a friend with the words, "Mitch, I want you to meet my friend, this is Bob Monday"?

Q: From now on will you refer to Detective Robert Monday as "Bob Monday"?

Q: Why is this ticket so valuable?

A: It's used to launder cash on the black market. In this case, one of Wilee's former college classmates is using the ticket to smuggle her child out of China. Which is actually a fairly out of place subject considering this movie is primarily about people riding bikes at a rapid speed.

Q: What tactics does Bob Monday use to get the package from Wilee?

A: At first, Bob Monday just kind of keeps asking for it. Nagging, almost: "C'mon, gimme the envelope. C'mon, what's it to ya? Gimmie it!" Later, things get violent.

Q: Do Joseph Gordon-Levitt and Michael Shannon have good chemistry together in Premium Rush?

A: It's almost as if these two are in completely different movies. Gordon-Levitt gives his, as always, earnest performance. Then there's Shannon who is hamming it up in a way that I can only assume will earn him a note from Nic Cage at some point that reads, "Hey, man, great performance - Nic."

Q: How many times is the phrase "brakes are death" used during Premium Rush?

Q: Did you enjoy Premium Rush?

Q: Is there another option that also uses a "folksy" word?

A: "Shucks, my eyes have seen everything now."

A: In other words: Premium Rush is one of the most ridiculous movies that I have ever seen. Ever. But, good lord, (more folksy!) it's extremely entertaining to watch.

Q: What's the most ridiculous thing about Premium Rush?

A: That Wilee has the ability to see the outcome of each path that he chooses before entering a crowded intersection. So, as a viewer, we see Wilee being run over by a car multiple times before he finds a safe path. As a microcosm of this movie (and life, maybe) this particular feature is at the same time ridiculous and fantastic.

Q: What was your favorite scene Premium Rush?

A: When Bob Monday delivers a heartfelt soliloquy on the deterioration of network television after hearing the phrase "suck it" spoken during primetime.

Q: Does the phrase "suck it" play into a dramatic final moment?

A: Of course it does.

Q: Is a flash mob at all a part of the ending of Premium Rush?

A: Of course a flash mob is a part of the ending of Premium Rush.

Q: If you're going to be blurbed in the commercials this weekend for Premium Rush, what quote do you think will be used?

A: "Premium Rush is the best movie this year about New York City bike messengers!" Mike Ryan, The Huffington Post

Mike Ryan is senior entertainment writer for The Huffington Post. Believe it or not, we will all be talking about Oscar movies very soon. You can contact Mike Ryan directly on Twitter.