Which is the best known / most universal holiday tradition? Hanging stockings by the fireplace? Draping the Christmas tree with tinsel? Leaving cookies out for Santa?

To Kevin Deters and Stevie Wermers-Skeleton's way of thinking, it's none of the above. Which is why -- when these two Walt Disney Animation Studios vets were tasked with creating a sequel to that Emmy Award-winning holiday special, Prep & Landing -- Kevin and Stevie opted to go instead with that old Christmas favorite, the family squabble.

"So many people -- when they go home for the holidays -- suddenly find themselves dealing with old family tensions and sibling rivalry," Kevin explained. "Which is why we thought it might be fun to explore this story idea within the Prep & Landing universe by giving Wayne the Christmas Elf a younger brother who's kind of a celebrity at the North Pole."

That character would be Noel, the most esteemed member of Santa's Coal Elf Brigade. A larger-than-life personality, Wayne's little brother is the North Pole's acknowledged expert when it comes to dealing with naughty children. So when a FCC (i.e. a Fruitcake Conduct Calculator. Which is this handheld device that Coal Elves use in the field to collect the necessary data when they're trying to determine if a kid has actually been naughty or nice) falls into the hands of a computer-hacking naughty child, Noel is then assigned by Santa to work with Wayne & Lanny to retrieve said object. And once the brothers arrive at the worksite... Well, the old family tensions emerge.

"Of course, what was fun about making Noel a coal elf is that -- while we did get a brief glimpse of these guys during in the first Prep & Landing -- Naughty vs. Nice now gives us a valid excuse to explore this whole other side of Santa's operation," Stevie said. "So we use the North Pole's B.U.L.B. transit system -- which is just like Disneyland's old Skyway, only the ride vehicles are Christmas bulb-shaped -- to take Wayne & Lanny over to the Coal Elf District. And we then send these characters into Christmas Carol's, which is this great bar where all of the Coal Elves go to hang out after work."

And given that one of the more popular aspects of the original Prep & Landing holiday special was all of that hi-tech Christmas-themed gear that Wayne & Lanny use while they're in the field, Deters and Wermers-Skeleton's made sure that Naughty & Nice revealed even more of Santa's technological arsenal.

"One of the key locations in this new Prep & Landing special is the database tree farm. Which is this immense computer facility where Mr. Thistleton -- who's kind of the Bill Gates of the North Pole -- and his staff keep track of every child on Earth, constantly monitoring their behavior to see who's being naughty or nice," Kevin continued. "And when this system accidentally gets corrupted, Wayne & Noel must then set aside their brotherly differences and try & save Christmas." 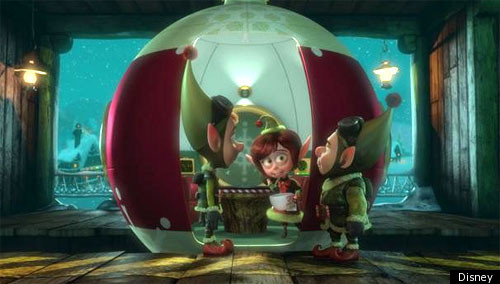 The end result is Naughty vs. Nice, that rare sequel that equals. This new holiday special (which premieres tonight on ABC 8:30 -- 9 p.m. ET) manages to take everything that was inventive & fun about the first Prep & Landing (EX: Thrasher, Dasher's cousin. The fearsome commander of Santa's stealth reindeer squadron) and then puts a twist on this Christmas tale (i.e. the only elf at the North Pole who isn't intimated by Thrasher is -- of course -- Noel. Whose pet name for this impossibly tough & imposing reindeer is "Bambi.")

And given that Walt Disney Studios Home Entertainment just released the original Prep & Landing on Blu-ray and DVD late last month (Not to mention that Hallmark has a ton of "Disney Prep & Landing" -themed merchandise available for purchase this holiday season. Plus that 8-page story which Marvel just published in one of its comic books where Wayne and Lanny run into some trouble getting Avengers Mansion ready for Santa's annual visit), it's pretty clear that there are those at the Mouse House who would love to see Prep & Landing become Disney's next big franchise. With two of those people being Deters and Wermers-Skeleton.

"I'd love to see Wayne and Lanny become so popular that they'd then be turned into walk-around characters at the Parks," Stevie enthused.

Well, Wermers-Skeleton did sort of got her wish this holiday season. Given that Disney California Adventure's nightly "World of Color" water pageant now features a Prep & Landing -themed pre-show. But for Disney Parks and Resorts to invest the time and money necessary to create walk-around character costumes for Wayne & Lanny... Well, that would mean that Prep & Landing would then have become an ongoing franchise. So do Kevin and Stevie actually have enough material to produce even more sequels to this 2009 holiday special? 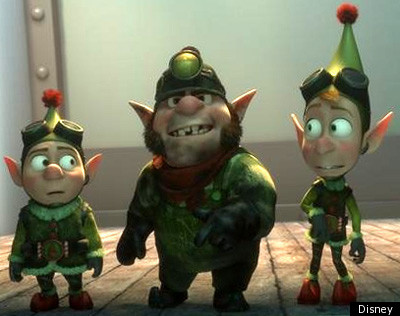 "When we were originally working on the first Prep & Landing, John Lasseter encouraged us to make the North Pole and the world of the Christmas Elves who work there as rich and as detailed as possible," Deters stated. "So we've got plenty of places that we haven't explored yet."

"Like the Fruitcake Factory. Which is the North Pole's version of the Cheesecake Factory," Wermers-Skeleton chimed in. "This is where all of the elves go when they have something really worth celebrating. Where they can then dine on the hundreds of different varieties of fruitcake that are served there."

But in order for there to be a Prep & Landing 3 or 4 , a sizable audience first has to tune in and watch Naughty vs. Nice tonight and/or watch this sequel when it airs back-to-back with the original Prep and Landing on Thursday, December 22nd between 8 -- p.m. ET.

So if you'd like Walt Disney Animation Studios to produce even more installments of its clever Christmas Elf saga, then be sure and catch Prep & Landing: Naughty vs. Nice over the coming holiday season.

Jim Hill is an award-winning entertainment writer who lives in New Boston, N.H. Over the past 30 years, he has interviewed hundreds of veterans of the animation and themed entertainment industry and written extensively about The Walt Disney Company.

Jim is currently working on a behind-the-scenes history of the development and construction of Disneyland. For his more immediate musings on movies, TV shows, books and theme parks, please check out his blog, jimhillmedia.com.