This post is in response to an article published on the Washington Post by Jacob Bogage on July 21, 2015, titled "Study: Pepco is the country's worst utility at connecting solar power."

Although it is no secret that Puerto Rico's deep economic crisis extends far beyond anything the island has seen in its modern history, few opinion makers and pundits discuss in detail how high energy costs and the Commonwealth's monopoly over utilities constitute one of the main roadblocks for economic recovery and competitiveness.

With a total of $72 billion debt outstanding, Puerto Rico's debt equals 70 percent of its economic output, far more than any U.S state. The island's public debt as a percent of 2013 personal income has reached 87.5 percent. That compares with the average of all 50 states of 3.1 percent. However, Puerto Rico's debt is hardly a monolithic credit. A recent study prepared by Anne Krueger, a Professor of International Economics at the John Hopkins University and former Deputy Managing Director of the International Monetary Fund (IMF), confirms that the central government and its three large government owned corporations -- the water and sewerage utility (Puerto Rico Aqueduct and Sewer Authority, or PRASA), the state electricity company (Puerto Rico Electric Power Authority, or PREPA), and the highway authority (Highways and Transportation Authority, or HTA) -- have been responsible for most of the increase in public debt. 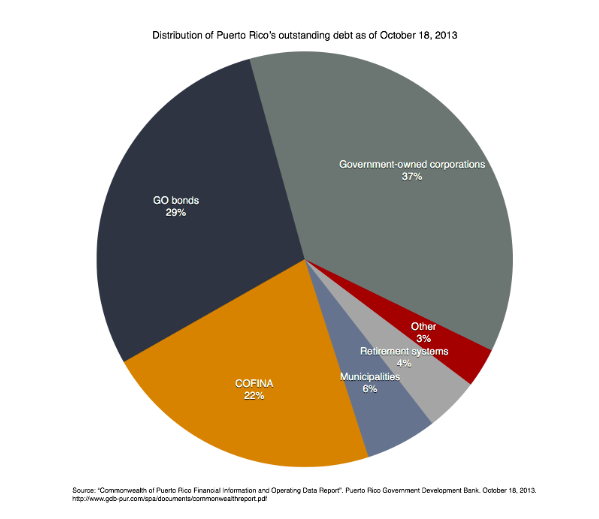 Since neither Puerto Rico nor its government-owned corporations can file for Chapter 9 bankruptcy, Puerto Rico's government owned-corporations need to undergo significant structural changes in order to pay back their obligations. Whether amending Chapter 9 to allow a Detroit-styled bankruptcy procedure for Puerto Rico is a good or bad deal, maximizing efficiency, cutting red tape and modernizing obsolete operational systems in government owned corporations must be a priority in any debt-restructuring plan. According to Anne Krueger in "Puerto Rico: A Way Forward":

The drive for competitiveness must include a cut in high energy costs, which cascade down to the rest of the economy. The silver lining in PREPA's financial difficulties is that it has forced the public enterprise to confront its problems of over-staffing and inefficiency. The specifics of upcoming reforms, and the associated debt relief to make it viable, are still being worked out by PREPA and its creditors. Whatever the details, they should build to a solution where PREPA focuses on transmission and distribution, while electricity generation is opened up to competition from newer and more efficient suppliers.

On June 1, 2015, PREPA published PREPA's "Transformation: A Path to Sustainability," a detailed report prepared by AlixPartners, a global business advisory firm hired by PREPA after bondholders raised concerns over the lack of a structured and organized debt negotiation framework. The report cites several internal challenges faced by PREPA, such as high dependence on fuel oil, inability to diversify fuel mix and rising energy costs due to an antiquated rate structure that fails to effectively capture costs, among others.

AlixPartner's report on PREPA's troubles is very emphatic on the use of renewables, such as solar energy, to cut the reliance on heavy fuel oils and move to greater reliance on cleaner natural energy. Modernizing PREPA's facilities to reduce electricity rate is a key to lure private investment in Puerto Rico. 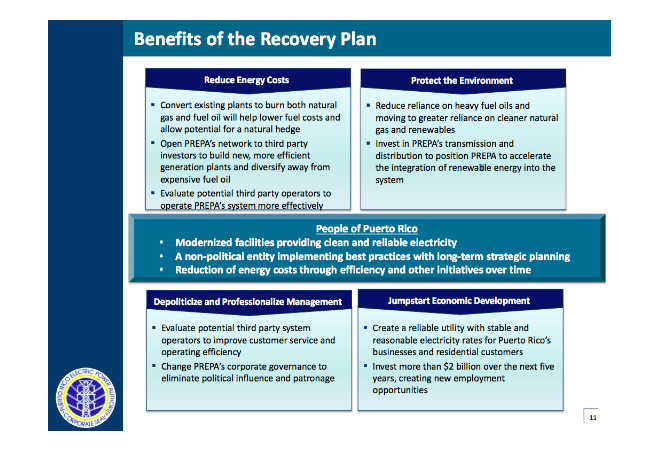 More often than not, commercial consumers cite the high cost of energy as one of the main factors asphyxiating Puerto Rico's economy. Puerto Rico manufacturers have emphasized the need for energy-cost reduction to remain competitive vis-à-vis other jurisdictions. According to Carlos Rivera Vélez, President of the Puerto Rico Manufacturers Association (PRMA):

To compete effectively in global markets, Puerto Rico must reduce its energy costs significantly... on the issue of cheap energy, we have a significant competitive disadvantage. The U.S is competing with prices ranging between 8 cents and 10 cents per kilowatt hour.

Meanwhile, residential consumers also face an uphill battle with PREPA if they opt for renewable energy as a way to cut their monthly bill on electricity. A recent article published by the Washington Post, cites Pepco, the power provider for parts of Maryland and Washington, D.C, as the country's worst utility at interconnecting solar power. According to the Washington Post:

The industry standard for interconnection, the process that allows customers to operate their solar systems, is 25 days, according EQ Research, which conducted the study on behalf of several solar energy providers and the trade group Solar Energy Industries Association. But in Maryland, Pepco takes on average 76 days to interconnect solar users with the power grid, according to the report. In the District, Pepco takes an average of 51 days.

The average wait time for a residential unit to interconnect solar panels to PREPA's grid is an astonishing 142 days. This is close to 6 times the average industry standard for interconnection in the U.S, which is 25 days, and almost twice Pepco's interconnection timeline for Maryland's solar customers, which is 72 days. It's PREPA, not Pepco, that is the country's worst utility company at connecting solar power.

Although certainly alarming, this should come at no surprise since Act 57 of 2014, dubbed the Act for the Transformation and Energy Relief of Puerto Rico, was signed into Law on May 2014. For the first time in Puerto Rico's history, the Government established a clear compliance policy for PREPA to ensure that at least 60 percent of the electricity generated in Puerto Rico from fossil fuels is generated in a highly efficient manner, as defined by the Puerto Rico Energy Commission (PREC), an independent regulatory body also created by the Act. According to Act 57, PREPA has a 3-year deadline to meet the 60 percent threshold, but PREPA's fight to retain its monopoly still wages on.

Among its wide-reaching powers, the PREC has jurisdiction to revise and approve minimum technical requirements and additional technical requirements for the interconnection of distributed generators and oversee compliance with the same. A good alternative to solve the interconnection problem is filing a formal complaint before PREC, since no ruling has been issued on this matter and PREPA continues to lag behind.

As evidenced above, Puerto Rico's economic crisis is nothing to laugh about. Drawing comparisons to Greece and Detroit could be illustrative, but the context of Puerto Rico's case is far different. Neither Detroit nor Greece has a state monopoly over energy responsible for a significant portion of their debt. Puerto Rico's challenges are nothing short of unprecedented, but they can be overcome. As unprecedented as they are, they also require unprecedented solutions that will be uncomfortable for many -- including bondholders and several of Puerto Rico's government-owned enterprises.

As for PREPA, the costs of inefficient business practices, political meddling and outdated energy policies has led to a total debt of $9 billion outstanding that must be paid someway or another. Although it is yet to be seen if bondholders will demand specific structural reforms to give PREPA a haircut in their debt, it seems clear as day that PREPA must abandon its dependency on heavy oil for clean and renewable energy.

PREPA's evolution to renewable sources of energy is not only a matter of self-sufficiency, but also a necessary step in the right direction to jumpstart Puerto Rico's once almighty economy.