First SARS, then Avian Bird Flu, and now the Iddy Biddy Piddy Pandemic. Here we go again, and this time we are at DEFCON 2, apparently. And of course in times of artificially manufactured duress we must remember to not under any circumstances remain calm--it is very important to panic and support a good healthy public hysteria. Do your part. Support the mass media's fixation on a modern-day Captain Trips narrative. They need the ratings. There hasn't been a good old-fashioned saucy sexual scandal among the politicos in quite some time, all is quiet on the tsunami/volcano front, and the Craiglist Killer just doesn't got what it takes (hard to empathize with sinners', who were utilizing casual encounters, most unfortunate endings when they were financially hawking happy ones). I mean we seriously can't be expected to sit in front of the boob tube drooling over Arlen Specter's spectacular defection to the Democratic Party can we? Where are the tantalizing titillation or doom and gloom? Please! I might as well read a book or pursue my dreams or something. 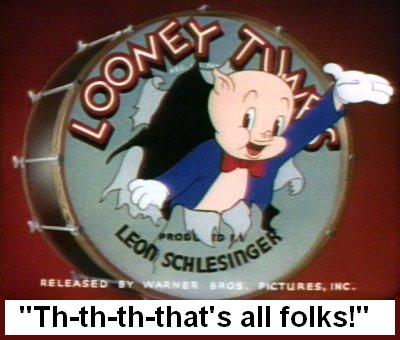 Also, it is important to boycott bacon and pulled pork sandwiches, even though the offending pathogen's transmission has not been scientifically connected to the consumption of the succulent buttermilk-bathed bodies of these mud-trolling cob rollers. It shows that we are serious and committed to overreacting. I mean you'd think the United States would take a world leadership position here. Instead we have to idly watch as other nations out-frenzy us. Russia and Gabon are blatantly banning all imports of the other white meat, while Egypt has ordered the mass-execution of all of their unhallowed hoggies (although this could merely be a convenient excuse to settle an age-old Islamic grudge--why must unsanctified flesh taste so delicious!).

Meanwhile, pork industry lobbyists are out to ruin all our fun by trying to change the name of the swine flu back to H1N1 Flu or even worse: Hybrid Influenza. Borrrrring! One sounds like a Star Wars robot and the other like an environmentally sound automobile that runs on germs (actually not a bad idea--someone contact Al Gore), but neither is particularly catchy. How are we supposed to foster widespread irrational pandemonium with these mundane lab-coat clad monikers?

And keep up the good work out there by continuing to make stupid jokes about acts of bestiality with our pink, hooved, pot-bellied friends, poor Kermit's marital bed quandary, and awful puns about overweight women and those who protect and serve on the police force. Hysterical! You are quite a card! And doing your duty producing uneasy titters and groans while perpetuating paranoia among your co-workers. Sales of Purell should increase by 20%.

I myself survived the dreaded SARS epidemic (in the heavily populated Asian neighborhood of Elmhurst, Queens) in which a total of 779 people died worldwide. There were eight U.S. cases, all non-fatal. I may be wrong but I think more people have actually lost their lives at Great Adventure... and that's just from the concession stands (More Flags, Less Fun! ). Though that didn't stop the local populace from panicking like pros. I rode the subway into NYC daily across from faces covered in surgical masks and red bandanas. As if we were heading towards some bizarre convention catering to Wild West outlaw bank-robbing bandits and the medics who loved them. It was exciting. Why not full Hazmat suits and oxygen tanks this time? Let's go full-blown Outbreak and spice up the morning commute!

Ultimately, though, the excitement it bound to end and the drama to abate as the world survives another media spin cycle and the perfect storm for virulent virus mutation once again fails to form. Odds are most of us will survive to watch yet another sub-par episode of American Idol thanks to the technologically advanced art of hand-washing we practice. It also doesn't hurt to have access to stockpiles of Tamiflu or the ability to mass-produce more, this being a first-world country and all. And let's remember this is a strain of influenza, not AIDS, and the majority of us would probably kick it on a mucus filled Nintendo-Wii-filled sick day vacation from our cubicles.

However, if it comforts you more to fantasize about a dark and dreary post-apocalyptic dystopia where a sole bedraggled man trudges down I-95 with a shopping cart desperately searching for any signs of other survivors (perhaps, with the re-tread REM ditty Cause it's the end of the world as we know it, and I feel swine, as background score), I say go for it. It's either that or waiting for the much-anticipated cinematic adaptation of Cormac McCarthy's The Road to come out...or you could just go outside, live your life and enjoy the spring. Nah! What if???