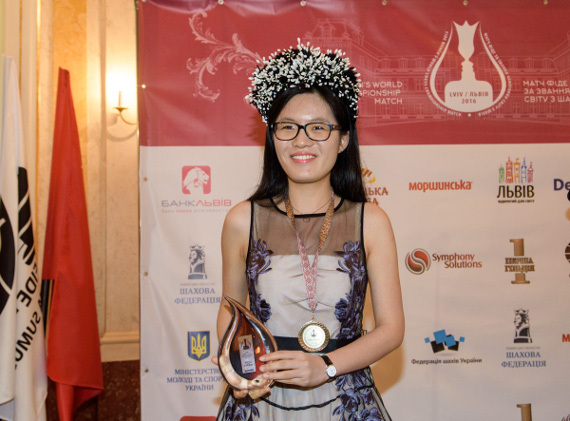 Hou Yifan after winning the Women's World Chess Championship in March. Photo by Vitaly Hraber from the official site of the match.

Hou Yifan is the Women's World Champion, but her reign may not last much longer.

The World Chess Federation, also known as FIDE (for Fédération Internationale des Echecs), has said that there will be an elimination tournament this October to select a new champion and, at the moment, Hou has no plans to participate.

Hou has also quit the Women's Grand Prix, according to an interview on the Web site Chessbase.com. The Grand Prix is an important part of the cycle to select the Women's World Champion. Hou has said she will no longer participate in the cycle unless the process is reformed.

Hou, 22, who is Chinese, is far-and-away the best woman player in the world (after the retirement of Judit Polgar of Hungary in 2014) and the only woman among the world's top 100 players.

Hou has won the World Championship several times since 2010 and the reasons that she lost the title and the obstacles she had to overcome to regain it each time are the basis of her current discontent with the process.

She won the title in 2010 in an elimination tournament in Turkey. She was 16 at the time -- the youngest World Champion, male or female, in history.

In 2011, Hou successfully defended the title by easily beating Humpy Koneru of India, 5.5 to 2.5, in a best-of-ten game match in Albania. Hou was supposed to play the winner of the 2009-2011 Women's Grand Prix, but since Hou had won that as well, she played the runner-up in the standings - Koneru.

A year later, FIDE held another elimination championship tournament, this time in Khanty-Mansiysk, Russia. Hou lost the title as she was knocked out in the second round. The eventual winner was Anna Ushenina of Ukraine, who was the No. 30 seed at the start.

Hou immediately earned a shot at regaining the title because she had won the 2011-2012 Grand Prix, which gave her the right to play Ushenina in a best-of-ten-game match in 2013. Once again, she won easily, 5.5-1.5. 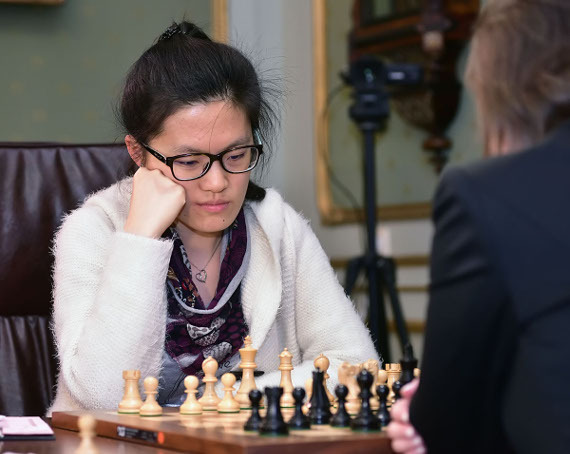 Hou Yifan during Game 9 of the 2016 Championship, which she won to clinch the title. Photo by Vitaly Hraber from the official site of the match.

Hou was prepared to play in the 2014 elimination tournament for the championship, but after FIDE was initially unable to find the financial backing and site needed to stage the tournament, it was rescheduled for 2015. That conflicted with another tournament in Hawaii that Hou had already promised to play, so she lost the title again, this time by not playing. The tournament was won by Maria Muzychuk of Ukraine, the eighth seed, who thus became champion.

Since Hou had won the Grand Prix a third straight time, she had yet another opportunity to regain the title, once again in a best-of-ten-game match against Muzychuk. The match was held in March 2016 in Lviv, Ukraine, and Hou again outclassed her opponent, winning by the score of 6-3.

The difference in the two players' strengths was never more evident than in Game 2 of their match when Muzychuk played well in the opening, when she was still following her pre-match preparation, but then became totally flummoxed when she began to think on her own.

Now Hou, facing yet another elimination tournament later this year to retain the title, has said, "Enough."

She wants the Women's World Championship to be like the overall championship, which is only decided in a match between two players - the reigning champion and a challenger. The problem with the elimination format is that there are too many things that can go wrong, so the best player does not always win, as happened in the last two tournaments.

As Hou told Chessbase, "The thing I can't agree with is that such a knock-out tournament will decide who is the World Champion. A 64-player knockout event is mostly a lottery: you play two games, and if you lose the first for some reason you have good chances to be eliminated."

She added that such a format devalues the prestige of the World Championship title, as does having such frequent championships.

Hou's criticism is nothing new. They are the same arguments that were used against elimination tournaments when the federation used them to decide the championship in 1999, 2000, 2002 and 2004. Eventually, the federation yielded to the criticism and went back to a match format, beginning in 2008. Now the elimination format is only used in the World Cup, with the players in the final being seeded into the Candidates tournament to select a challenger for the World Championship.

Something like that is what Hou would like to see happen. She has said to the federation that if it wants to keep the elimination format, make the winner of the tournament the challenger for the title, rather than the champion, with the title being settled in a match.

So far, despite repeated requests from Hou, the federation has refused to change. Its argument is that an elimination tournament is very popular with players and sponsors and it is much harder to promote and organize such a tournament if it is not for the title. (Curiously, the Federation has not yet announced where the championship tournament will be, which may be a sign that it is having trouble organizing the competition, yet again.)

If things do not change, Hou seems unlikely to play anytime soon for the Women's World Championship. Or perhaps ever. If so, she would end up following in Polgar's footsteps as Polgar refused to play in women-only competitions. If Hou does follow Polgar than, just as during the era when Polgar was active, the Women's World Champion would not be the best women player.