T'was the week before Christmas and I yelled at an old lady in a public bathroom.

In my defense, we were 2.5 hours into our trip to south Texas and I'd just read a story about a lady trying to steal a baby from a mother in a Kohl's restroom. No, I didn't have my baby with me, and I was in a Tres Amigos convenience store, but still I try to remain vigilant. In this case more of a vigilant idiot.

The bathroom had two stalls. I was in one and no one was in the other (unless they were crouched on top of the toilet, which happens all the time in movies). The second I began my hover (pee squat for my fellow germ-a-phobes), I heard the outside door squeak open as a woman entered the bathroom. Normally this is not cause for alarm, as I was in the women's restroom, but this time the woman walked directly to my stall and yanked on the door. Hard.

The door quivered in its frame and I shouted, politely, that SOMEONEWASINHERE! The woman pulled again. This time a tiny loafer-ed foot slid under the stall door. I pride myself on being able to tell a lot about a person by just observing them. On an unrelated note: Sherlock is back on PBS!

Any who, because of the style of shoe and the support hose being worn as socks, I placed this women in her mid to late 70's. From her grip on the door and her stance, I also assumed she won her weight class at the CrossFit Games. I braced myself for the inevitable. A tiny elderly woman was going to pull down this prefabricated stall around me and I was going to be crushed both physically and emotionally. If I didn't die from em(bare-ass)ment I would surely contract some sort of plague from the petri dish that is the floor of public bathrooms...

Public restrooms and dressing rooms already give me anxiety. It's silly really. The things I am afraid of. I'm scared of the devil, which I blame on the Catholic Church and various horror movies from the 70's. I'm afraid of roaches. I know they cannot bite me, but really I'm terrified of one falling on me from the ceiling and having a heart attack. What a horribly un-elegant way to die. But the public restroom and dressing room fear is fairly new. It's a little over two years old, actually. In fact, it exists entirely because I haven't lost the baby weight.

I was thin my entire life before getting pregnant. I was still thin 4 months into the pregnancy, but in the second half I gained over 60 lbs. I asked the doctor at 7 months when the weight gain would slow down and he kind of raised his eyebrows and said, "Well, it's not up to me". Obviously, I strangled him with his stethoscope and buried him behind his office.

No, not really. If I had, I probably wouldn't blog about it and it would've been me crouching on top of the toilet in the stall next door.

Everyone said breastfeeding would help me lose the weight, and in my experience-NO.

In fact, I suspect that since I had a C-section, my body didn't realize we weren't still pregnant and held onto the weight just incase the baby decided to sell it on the black market to celebrities who would willingly inject it into various body parts. I like to think she'd have held out for a Kardashian.

After my daughter was born, I restricted calories. I worked out. I stared at photos of new celebrity moms and looked for marks that resembled symbols from Dan Brown movies. And I only lost ten pounds in the first year.

Suddenly, I had an entirely new (and shallow) set of fears. Would I ever lose the weight? Were people talking about me? Judging me? How the hell were all these people losing the weight so fast? Had I been judging other mothers? How do you join the Illuminati?

I realized it's easy to "not to care about how your body looks" when you're skinny. This extra 40lbs was a whole new (saddle)bag of tricks.

I started trying on clothes over my other clothes to avoid the harsh lighting and full-length mirrors in dressing rooms. My new style consisted of shirts that were long enough to cover the tops of my maternity jeans and all the things to hide my arms. If shawls ever come back in style I'd like everyone to know that I totally called it. To a certain Mennonite demographic, I'm basically Rachel Zoe.

When I tried on a bathing suit last summer (a tank-ini, of course), I pulled on the bottoms over my jeans. I looked like a cartoon character that had been dragged through a clothes line. It was actually sort of flattering and I seriously considered wearing it to the beach just like that, but the store didn't have any sunbonnets to match.

In the next year, I lost another 15 lbs, but I'm still a solid 15 lbs away from my pre-pregnancy weight and I wasn't quite ready to share that picture with the world or all the occupants of a gas station bathroom.

I pulled my pants up and opened the door right as the lady started her third pull. I yanked back and loudly articulated "OBVIOUSLYSOMEONEWASINHERE!" as I stepped out of the stall. She stared at me slightly flustered. I don't know if she was more surprised to see a person behind the disembodied voice or that the door actually opened inward.

"I thought you were in the other stall," she said. I glanced at the partially opened door next to us.

"It sounded like your voice was coming from in there," she followed up, defiantly.

I apologized. I hadn't meant to throw my voice, or been aware that possessed such a gift, but I know you should always respect your elders, especially when they can deadlift more than you.

As I washed my hands, I thought about what I was really scared of and it all seemed so silly. My body created a baby. That baby has turned into a human I didn't know to ask for and never realized how much I needed. 3am Cinnamon Toast Crunch and bananas helped make the sweet little creature that lived inside of me for 9 months.

So what the Illuminati never returned any of my calls and I'm not magazine cover ready? I made a person and I've been kicking butt as a mom. This isn't an excuse for not running every morning (that excuse is that it's soooooo cold!) or for not doing push-ups before bed (I can't see the TV and I only shower once). This is just being ok with the body I currently have and knowing I'm working toward something else. I shouldn't have to wait for a number on the scale to feel good about myself.

Worse case scenario, an elderly battering ram in a rural gas station bathroom would've opened the door and seen a 30-year-old mother carrying an extra 15 lbs. In the grand scheme of things pre-pregnancy weight is just a number, and my daughter-she is so much more.

Plus, as ventriloquists go, I'm at least an 8. 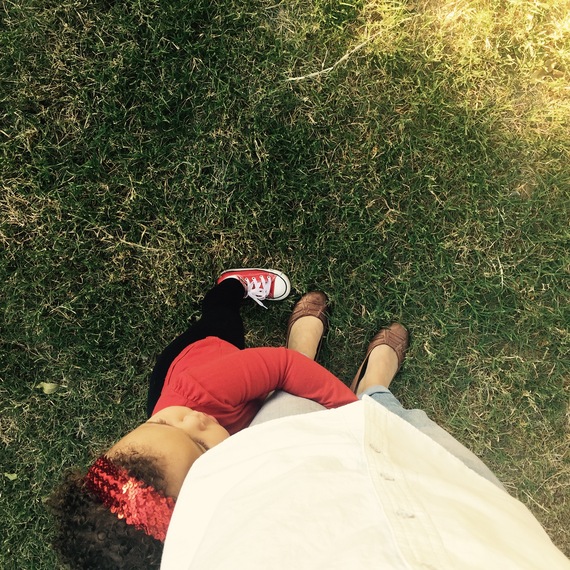 Read more from Liza on her blog.