The U.S. Senate's epic struggle just to reauthorize unemployment benefits for the long-term jobless suggests that policymakers in Washington fundamentally don't understand the jobs hole we're in, according to a team of trained economists.

The progressive Center for Economic and Policy Research reports that it could take an entire decade for the national unemployment rate to come down to pre-recession levels.

"Between December 2007 -- the official first month of the recession -- and December 2009, the U.S. economy lost more than eight million jobs," write CEPR's John Schmitt and Tessa Conroy. "Even if the economy creates jobs from now on at a pace equal to the fastest four years of the early 2000s expansion, we will not return to the December 2007 level of employment until March 2014.

"And, by the time we return to the number of jobs we had in December 2007, population growth will have increased the potential labor force by about 6.5 million jobs. If job growth matched the fastest four years in the most recent economic expansion, the economy would not catch up to the expanded labor force until April 2021."

Here's a dramatic chart from CEPR showing the total number of jobs lost since the recession began: 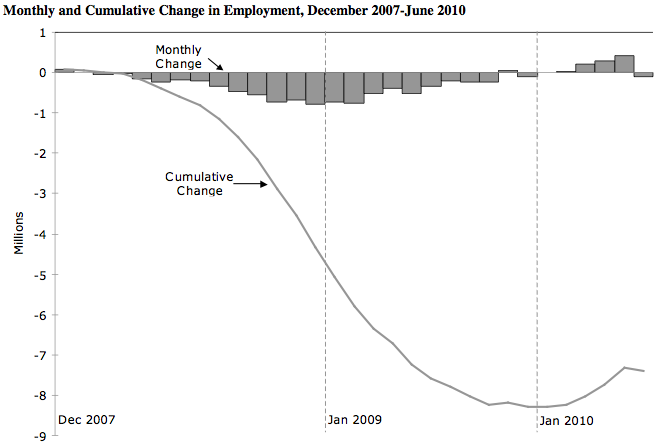