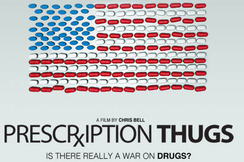 This weekend is the start of the Tribeca Film Festival. At the festival, the documentary film "Prescription Thugs" will be screened. I am honored to be featured in this film and to help educate the public about the grave danger that is posed by the abuse of prescription medications.

The Centers for Disease Control and Prevention (CDC) report that prescription drug abuse has reached epidemic proportions. The CDC states:

Since 1999, the amount of prescription painkillers prescribed and sold in the U.S. has nearly quadrupled, yet there has not been an overall change in the amount of pain that Americans report. Overprescribing leads to more abuse and more overdose deaths.

Overdosing is now the leading cause of accidental death in the United States, accounting for more deaths than traffic fatalities or gun homicides and suicides. Fatal overdoses from opiate medications such as oxycodone, hydrocodone, and methadone have quadrupled since 1999, accounting for an estimated 16,651 deaths in 2010.

Every day, 44 people die from prescription painkiller overdose; that's 16,000 people a year. In 2011, more than 40,000 people died from drug overdoses in the U.S. -- the greatest percentage of them opioid overdose deaths. The situation is utterly out of control. The CDC writes that, "Enough prescription painkillers were prescribed in 2010 to medicate every American adult around-the-clock for a month." That kind of overprescribing is simply unacceptable.

In professional sports, it's almost expected that athletes will take all sorts of drugs. For example, we, the fans, expect top athletes to play through the pain of heavy contact sports including football, and then are scandalized when it turns out that many of these athletes are abusing painkillers. Is it right for us to hold this kind of standard?

But regular individuals in the United States do the same. We have become a nation of people that expects to feel no discomfort. It is unrealistic to expect this to be the case, especially after surgery, many motor vehicle accidents, for those with chronic pain conditions, and some forms of cancer. Yet far too many people ask for and receive painkillers for the slightest, transient pain conditions, such as toothache or in some cases even flu! While national and state governments have taken action to curb this over-prescribing of painkillers, the damage is already done. When individuals can't get their hands on prescription pills, they often switch over to heroin, a cheaper and more easily accessible substance in the same opioid family.

Is there a concerted effort being made to get people hooked on prescription painkillers? I'll let you watch the film "Prescription Thugs" and look at the research to come to a conclusion on your own. What I can tell you without reservation is that there is hope of recovery if you or someone you love is misusing or has become addicted to opioid drugs such as oxycodone, hydrocodone or even heroin.

There are also proven forms of pain management that can help you cope with chronic pain without the dangerous and dulling effects of prescription pain medications. Acupuncture and yoga in combination, for example, can make a real positive difference in relieving pain symptoms. There is hope.

No matter how much of a grip prescription drugs have on you, seek the assistance of a quality, evidence-based treatment facility. You don't have to become a statistic. There can be a wonderful life to be had after overcoming opioid addiction.

CEO of Cliffside Malibu, Co-author of the book 'Ending Addiction for Good'