She, Samantha Montgomery, is a 39-year-old who works a 9-5 at a nursing home in a rough section of New Orleans. On her own time, she takes on the persona of Princess Shaw, a singer/songwriter who posts a cappella performances of her songs on her YouTube channel. It's a shot in the dark. Will anybody ever see them? 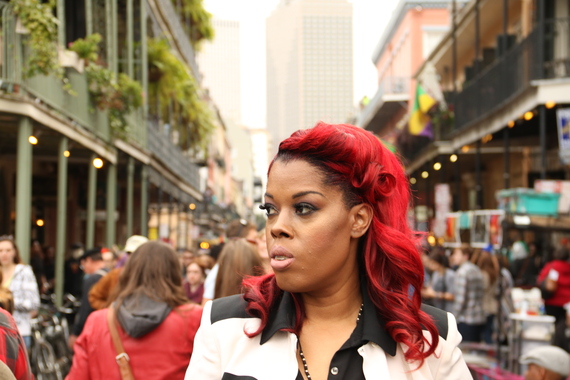 He, Ophir Kutiel, aka Kutiman, is a producer/video artist who lives on a kibbutz outside Tel Aviv. Kutiman edits together varied quick snippets of musicians performing on YouTube into clips that become cohesive music videos. Visualize a ransom note with various typefaces relaying a message. Now imagine an audio/musical missive lasting a few minutes.

Princess Shaw has written and sung a song called "Give It Up," posted it on YouTube and hoped for the best. It's a chance in a million. Something like putting lyrics in a bottle and dreaming that it will wash ashore on a beach frequented by Pharrell Williams. She isn't that lucky, but close. A stranger halfway around the world in Israel adds a clip of a young girl at a piano, a middle-aged man on drums, a boy on guitar, and other musicians' music to his collaborative quilt. Now "Give it Up" has background music and it becomes a viral sensation, 2,600,000+ views and counting.

Director/writer Ido Haar's camerawork is imperceptible. His rough-looking video footage makes everything look real and unrehearsed and gives the film a cinema vérité feel. It's as if Princess Shaw and Kutiman accidentally left their computers' cameras on and the whole world is taking a peek.

In Shaw, Haar has found a perfect protagonist wrestling with a dehumanizing music industry that prefers pretty singers who can lip synch, instead of vibrant vocalists who have real pipes. Struggles with making a living, a background of sexual abuse and other life challenges make Shaw vulnerable and courageous at the same time. Her looks, from the adult braces on her teeth to the fuchsia-colored hair, make her image indelible. And the doc's supporting actor, the very eccentric and talented Kutiman, is a media/music genius who turns rocks into diamonds. The bonding of the two disparate souls is enough to warm anyone's heart. Add in all the supporting players from around the world and you just might tear up.

This is a brilliant documentary. Completely fascinating. Singing to an empty room has never been so rewarding.