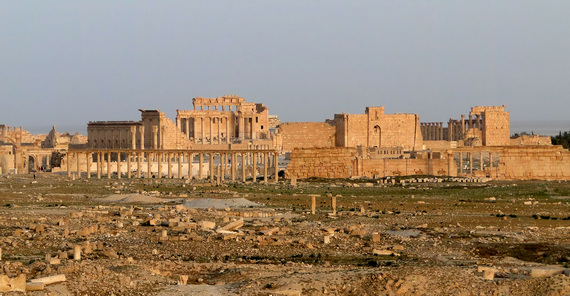 When I heard about ISIS's bombing of the Temples of Baalshamin and Bel in Palmyra, Syria, my first thoughts were that as horrible as such "monument terrorism" is, it is not nearly as horrific as the group's mass rapes and killings. Indeed, one of those killings combined both cultural and human destruction: a week before the papers announced that the 2,000-year-old Temple of Baalshamin had been blown up, ISIS members publicly beheaded Khaled al-Asad, the 82-year-old antiquities expert who was known as "Mr. Palmyra" for his lifelong devotion to protecting the site and its treasures. Apparently, he refused to reveal the location of other archaeological treasures.

Explorers, pilgrims and archaeologists who experienced the thrill of touching history in Palmyra will not have that chance again. Much of the city's storied beauty -- colonnaded streets, temples, squares -- which had weathered twenty centuries, has now been shattered forever. I never visited the site, but I have had the good fortune to walk the streets of Ephesus and Jerash, so I know the extraordinary awakening that occurs when the awe inspired by remnants of ancient cultures seems to warp time.

I am often asked what I think are the world's greatest sights. For me, they are those that expand your soul and your vision, filling you with gratitude for being in their presence, with wonder at how they have come to be and with a sense of duty to protect them. I group them into two categories: works of God or nature and works of man. In recent years, as my children have been studying history and we have become aware that school vacations will not last forever, we have been conscientious about traveling to these places. Among those I consider natural wonders are the Serengeti, the Grand Canyon, the Sahara, Victoria Falls, the Galápagos Islands and the Amazon. The works of man that I rank as epic include the Egyptian Pyramids, Machu Picchu, Angkor Wat, Petra, the Great Wall of China, Ephesus, the Roman Colosseum and the Athens Acropolis.

Every one of these great places exists because of individuals and organizations like Khaled al-Asad and UNESCO, which has declared the ruin of Palmyra a war crime. Throughout the centuries, far-sighted people and societies that honor beauty and history have preserved these treasures for future generations. Even so, although their situations are less dire than Palmyra's, many of the world's most awe-inspiring man-made and natural sites are endangered. ISIS's barbaric deeds, rather than instilling dread, remind me that we, as global citizens, must band together to protect shared humanitarian and cultural values and safeguard these portals to the past.

Indagare is a membership-based travel company with robust online editorial content, featuring staff-scouted destinations around the world, and a boutique, in-house travel agency. We travel, we write, and we plan memorable journeys for our members. Read more about Indagare.