As I reported yesterday, I submitted seven questions to the American president, Barack Obama. He kindly took the time to respond; following are the answers I received from the White House.

Thank you for this opportunity to exchange views with you and your readers in Cuba and around the world and congratulations on receiving the Maria Moore Cabot Prize award from the Columbia University Graduate School of Journalism for coverage of Latin America that furthers inter-American understanding. You richly deserve the award. I was disappointed you were denied the ability to travel to receive the award in person.

Your blog provides the world a unique window into the realities of daily life in Cuba. It is telling that the Internet has provided you and other courageous Cuban bloggers with an outlet to express yourself so freely, and I applaud your collective efforts to empower fellow Cubans to express themselves through the use of technology. The government and people of the United States join all of you in looking forward to the day all Cubans can freely express themselves in public without fear and without reprisals. 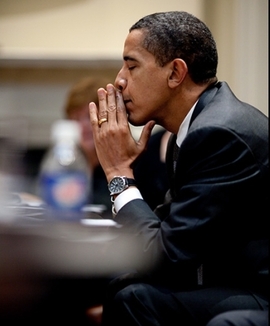 QUESTION #1. FOR YEARS, CUBA HAS BEEN A U.S. FOREIGN POLICY ISSUE AS WELL AS A DOMESTIC ONE, IN PARTICULAR BECAUSE OF THE LARGE CUBAN AMERICAN COMMUNITY. FROM YOUR PERSPECTIVE, IN WHICH OF THE TWO CATEGORIES SHOULD THE CUBAN ISSUE FIT?

All foreign policy issues involve domestic components, especially issues concerning neighbors like Cuba from which the United States has a large immigrant population and with which we have a long history of relations. Our commitment to protect and support free speech, human rights, and democratic governance at home and around the world also cuts across the foreign policy/domestic policy divide. Also, many of the challenges shared by our two countries, including migration, drug trafficking, and economic issues, involve traditional domestic and foreign policy concerns. Thus, U.S. relations with Cuba are rightly seen in both a foreign and domestic policy context.

QUESTION 2: SHOULD YOUR ADMINISTRATION BE WILLING TO PUT AN END TO THIS DISPUTE, WOULD IT RECOGNIZE THE LEGITIMACY OF THE RAUL CASTRO GOVERNMENT AS THE ONLY VALID INTERLOCUTOR IN THE EVENTUAL TALKS?

As I have said before, I am prepared to have my administration engage with the Cuban government on a range of issues of mutual interest as we have already done in the migration and direct mail talks. It is also my intent to facilitate greater contact with the Cuban people, especially among divided Cuban families, which I have done by removing U.S. restrictions on family visits and remittances.

We seek to engage with Cubans outside of government as we do elsewhere around the world, as the government, of course, is not the only voice that matters in Cuba. We take every opportunity to interact with the full range of Cuban society and look forward to the day when the government reflects the freely expressed will of the Cuban people.

QUESTION 3: HAS THE U.S. GOVERNMENT RENOUNCED THE USE OF MILITARY FORCE AS THE WAY TO END THE DISPUTE?

The United States has no intention of using military force in Cuba. The United States supports increased respect for human rights and for political and economic freedoms in Cuba, and hopes that the Cuban government will respond to the desire of the Cuban people to enjoy the benefits of democracy and be able to freely determine Cuba's future. Only the Cuban people can bring about positive change in Cuba and it is our hope that they will soon be able to exercise their full potential.

QUESTION 4: RAUL CASTRO HAS SAID PUBLICLY THAT HE IS OPEN TO DISCUSS ANY TOPIC WITH THE U.S. PROVIDED THERE IS MUTUAL RESPECT AND A LEVEL PLAYING FIELD. IS RAUL ASKING TOO MUCH?

For years, I have said that it is time to pursue direct diplomacy, without preconditions, with friends and foes alike. I am not interested, however, in talking for the sake of talking. In the case of Cuba, such diplomacy should create opportunities to advance the interests of the United States and the cause of freedom for the Cuban people.

We have already initiated a dialogue on areas of mutual concern - safe, legal, and orderly migration, and reestablishing direct mail service. These are small steps, but an important part of a process to move U.S.-Cuban relations in a new and more positive, direction. Achieving a more normal relationship, however, will require action by the Cuban government.

QUESTION 5: IN A HYPOTHETICAL U.S.-CUBA DIALOGUE, WOULD YOU ENTERTAIN PARTICIPATION FROM THE CUBAN EXILE COMMUNITY, THE CUBA-BASED OPPOSITION GROUPS AND NASCENT CUBAN CIVIL SOCIETY GROUPS?

When considering any policy decision, it is critical to listen to as many diverse voices as possible. When it comes to Cuba, we do exactly that. The U.S. government regularly talks with groups and individuals inside and outside of Cuba that have an interest in our relations. Many do not always agree with the Cuban government; many do not always agree with the United States government; and many do not agree with each other. What we should all be able to agree on moving forward is the need to listen to the concerns of Cubans who live on the island. This is why everything you are doing to project your voice is so important - not just for the advancement of the freedom of expression itself, but also for people outside of Cuba to gain a better understanding of the life, struggles, joys, and dreams of Cubans on the island.

QUESTION 6: YOU STRONGLY SUPPORT THE DEVELOPMENT OF NEW COMMUNICATION AND INFORMATION TECHNOLOGIES. BUT, CUBANS CONTINUE TO HAVE LIMITED ACCESS TO THE INTERNET. HOW MUCH OF THIS IS DUE TO THE U.S. EMBARGO AND HOW MUCH OF IT IS THE RESPONSIBILITY OF THE CUBAN GOVERNMENT?

My administration has taken important steps to promote the free flow of information to and from the Cuban people particularly through new technologies. We have made possible greater telecommunications links to advance interaction between Cuban citizens and the outside world. This will increase the means through which Cubans on the island can communicate with each other and with persons outside of Cuba, for example, by expanding opportunities for fiber optic and satellite transmissions to and from Cuba. This will not happen overnight. Nor will it have its full effect without positive actions by the Cuban government. I understand the Cuban government has announced a plan to provide Cubans greater access to the Internet at post offices. I am following this development with interest and urge the government to allow its people to enjoy unrestricted access to the internet and to information. In addition, we welcome suggestions regarding areas in which we can further support the free flow of information within, from, and to Cuba.

QUESTION 7: WOULD YOU BE WILLING TO TRAVEL TO OUR COUNTRY?

I would never rule out a course of action that could advance the interests of the United States and advance the cause of freedom for the Cuban people. At the same time, diplomatic tools should only be used after careful preparation and as part of a clear strategy. I look forward to visit a Cuba in which all citizens enjoy the same rights and opportunities as other citizens in the hemisphere.