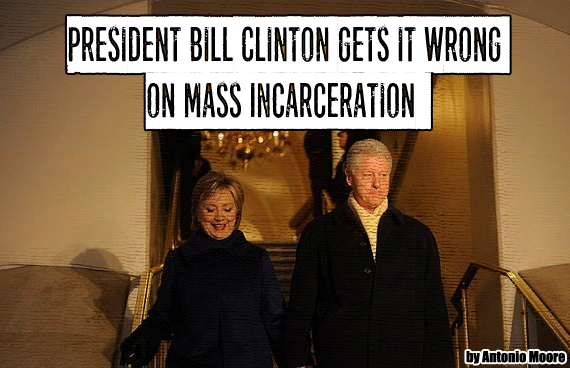 President Bill Clinton doubled down on his 1994 Crime Bill, pulling back from his recent apology for his role in the over incarceration of young African Americans. Instead, today he labeled these youth in similar fashion to his wife's description 20 years ago, as a type of predator that leads to people being "hopped up on crack." Mass incarceration has largely been the type of stain on the Clinton legacy with Black Americans that doesn't wash out with words. Clinton's bill has left in its wake a trail of devastated African American families cut off from loved ones that have served sentences for nonviolent drug offenses that were decades too long. For former President Bill Clinton to now insinuate that Black Lives Matter protestors are defending murderers and gang leaders, is offensive to a people that have been through so much due to his legislative actions. Yet, here we stand in 2016 hearing the same rhetoric espoused to create the Crime Bill, now being used to justify its abhorrent results. Where as in 1996 Hillary Clinton called young blacks super predators, that is now replaced with Bill Clinton saying,

I don't know how you would characterize the gang leaders who got 13-year-old kids hopped up on crack and sent them out into the street to murder other African American children -- maybe you thought they were good citizens.

Hillary Clinton's statements calling inner city black youth, "super predators who must be brought to heel" was a line of thought built to create unfounded paranoia about urban youth back in the 1990s.

This super predator myth that was debunked long ago is now revived by President Bill Clinton in 2016, recycling the same racial stereotypes. Bill Clinton's attempt to blame African American politicians for the Crime Bill he championed to prove he could be tougher on crime than the Republicans as part of his New Democrat strategy is historically inaccurate. President Clinton, this is your legacy; own it as you do the economic gains Hillary Clinton has touted throughout her campaign. While African American politicians facing communities devastated by the results of Reganomics and the crack epidemic were desperate to deal with violent crime leading to their support of many tough-on-crime measures. They did not foresee the results of your policies, being that large parts of their communities would be placed in prison, and stripped of welfare.

Today there are more African American men incarcerated in the U.S. than the total prison populations in India, Argentina, Canada, Lebanon, Japan, Germany, Finland, Israel and England combined. These nine countries in total represent over 1.5 billion people, in contrast, there are only 18.5 million black males in the United States, counting children. 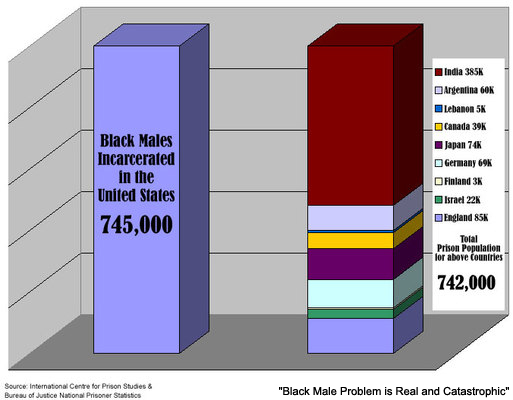 So what do the Hillary Clinton supporters say now when the mistakes of 20 years ago rush forward, not as a page that has been turned, but rather as a core part of the Clinton ideology on blacks in the ghetto? As a producer of the documentary Freeway Crack in the System, I have seen firsthand how the criminal justice system worked during the crack era. It wasn't unbiased, nor was it fair. It definitely wasn't as simplistic as it was described by President Clinton today. It was actually loaded with agendas, and economics in ways many who were targeted could never imagine.

The epicenter of the incarceration era Clinton referenced in his statement above, roots itself in the crack cocaine epidemic, and mandatory sentencing laws that followed. Yet, to truly look at the era of mass incarceration, we must dig deeper than Gary Webb's accusations in Dark Alliance the expose that brought to light the CIA's involvement in cocaine trafficking. Only by looking at the United States of America with honest eyes, being cognizant of cycles of actions, can we see Gary's tangled web for its true light. Through this analysis of President Clinton's Crime Bill and the like, we are lead to a larger understanding of black America's historical arch in the United States, and a deeper view into how it weaves into the fabric of present day realities. Those realities include the stories of Eric Garner, Mike Brown and so many others that have dealt with the secondary consequences of mass incarceration's hold on our country.

Over the course of three years myself and several other producers took on the task of delving into the War on Drugs and Iran Contra Scandal as we created the film Freeway Crack in the System. Crack in the System was an in-depth detail into how our nation followed this path toward the incarceration of so many in such a short period of time. As a former prosecutor, I have seen the system up close and understand its impact on lives. In this film, we journeyed from the epicenter of the crack epidemic in South Central Los Angeles to the Nicaraguan City that started the domino effect that led to America's cocaine explosion. The connection between the two cities was an administration headed by President Ronald Reagan that,with one hand, turned a blind eye to Nicaraguan drug suppliers trafficking large-scale cocaine in the United States, and with the other reformed the American incarceration landscape with the implementation of harsh crack cocaine sentencing for American citizens who bought and sold some of the same drugs far down the supply line. All of this was done while the government contemporaneously allowed for the privatization of U.S. prisons that would hold this flood of new inmates.

As stated in our film by Eric Sterling, one of the drafters of the Anti Drug Abuse act of 1986, who apologizes on camera for writing some of the most draconian prison sentences ever created for a nonviolent drug offense.

I knew that these laws were a mistake when we were writing them... There is no question that there are tens of thousands of black people in prison serving sentences that are decades excessive... Their families have been destroyed because of laws I played a central role in writing.

According to Sterling these laws were written based on a hysteria created by crack cocaine's imagery in the media. Furthermore, he had not seen a law prior, or since, implemented in such a way. Police agencies were not surveyed, drug scientists were not consulted, this was not a law that was guided by logic. Young blacks were convicted and sentenced based on emotion and fear.

The economic backdrop that set this in motion cannot be ignored. Throughout the two terms of Reagan's presidency, economic advancement declined in urban centers across the country. Decreased access to job opportunities as a result of globalization moving manufacturing jobs to international markets, limited availability of government programs and an implementation of trickle-down economics by Reagan hit African Americans with a devastating impact. This was the frame for the picture that became President Bill Clinton's masterpiece of a Crime Bill. Economic genocide of a community by governmental policy had led to the creation of urban ghettos mired in poverty. President Clinton's claim that black poverty and unemployment declined under his presidency is only partially true, it overlooks the fact that incarcerated people don't count in poverty and unemployment stats. Skyrocketing incarceration rates created a false impression of higher rates of increased employment among black men, by leading those that were incarcerated to be an invisible group behind bars. In addition, the myth that incarceration only increased at the state level fails to deal with the incentives the 1994 Crime Bill created for states to make this action.

So today, as Bill Clinton addressed protestors and screamed into the microphone for them to let him speak, he forgot that the last time we allowed him to speak, it lead to a type of incarceration the modern world has never seen before.

So we rather you did not say as much this time.

Antonio Moore is a Los Angeles Attorney. He is also one of the producers of the documentary on the Iran Contra, Crack Cocaine Epidemic and the resulting issues of Mass Incarceration "Freeway: Crack in the System". Mr. Moore has contributed pieces to Huffington Post, Inequality.org and thegrio on topics of race, mass incarceration, and economics.