Even though we've been swept into the pulse-pounding vortex of the presidential campaign, every once in a while something happens in the news which snaps us back into the dark reality that an incompetent shit-kicking hoople still occupies the White House.

This past Tuesday, for example, while the stock market buckled under the weight of a subprime-fueled recession; while oil prices drove the rate of inflation to its largest increase in 26 years; and while Citigroup panhandled for bailout cash from various and infamous foreign governments including Saudi Arabia, President Bush was busy participating in something called a "sword dance" at the Al Murabba Palace in Riyadh.

In terms of America's reputation and economy: one of the worst days imaginable.

President Bush, who has resolved to both reduce our addiction to oil and to spread democracy to the Middle East, had to skulk around with the Saudi royals -- like freakin' Gollum with an ill-favored look -- begging for more precious evildoer oil.

Rewind to three long years ago this month. The theme of the president's second inaugural address (pardon me as I involuntarily convulse at the bilious recollection of George W. Bush delivering a second inaugural) was "Celebrating Freedom" and he discussed his mission of bringing democracy and liberty to oppressed people around the world:

We will persistently clarify the choice before every ruler and every nation: The moral choice between oppression, which is always wrong, and freedom, which is eternally right. America will not pretend that jailed dissidents prefer their chains, or that women welcome humiliation and servitude, or that any human being aspires to live at the mercy of bullies.

We will encourage reform in other governments by making clear that success in our relations will require the decent treatment of their own people.

America's belief in human dignity will guide our policies, yet rights must be more than the grudging concessions of dictators; they are secured by free dissent and the participation of the governed. In the long run, there is no justice without freedom, and there can be no human rights without human liberty.

Yet in an effort to inject more foreign oil into the tract-marked veins of the desperate American economy, the President of the United States played with swords inside the garish walls of that Saudi palace. 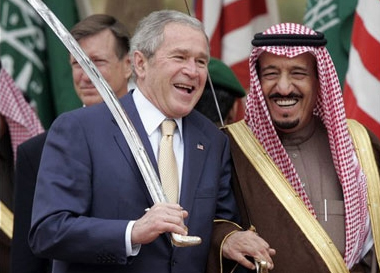 There's a rule -- something about running with scissors -- which ought to have applied here. But the implicit hazard of an accident-prone Ruprecht waving a sharpened blade in the vicinity of living humans fails to underscore the true danger and indignity of the event -- the real-world horror of our constitutional defender and chief diplomat dancing and smirking while brandishing those Saudi weapons.

While the sword President Bush had slung over his shoulder like a clump of Crawford scrub wasn't specifically an executioner's sword -- in the same way a looped and knotted length of rope isn't specifically a hangman's noose or a Teflon-coated hollow-point bullet isn't specifically a cop-killer -- the resemblance was striking enough to send a message that the United States -- the "shining city on the hill" or whatever the hell Saint Reagan called it -- is willing to toss aside its commitment to human rights, justice and democracy in order to sniff the taints of our true global masters: the House of Saud which, last year, conducted at least 136 public beheadings in these so-called Chop Squares. It's also worth noting that during the same year in which President Bush delivered his second inaugural, the Saudis publicly beheaded 191 people.

CBS News: A condemned convict is brought into the courtyard, hands tied, and forced to bow before an executioner, who swings a huge sword amid cries from onlookers of "Allahu Akbar!" Arabic for "God is great."

The Saudis decapitate criminals, apostates, foreigners, homosexuals, Christians, women and even witches. Many of those who are beheaded are found guilty without due process using shoddy evidence at best and, subsequently, too many decapitations are carried out on innocent people. In defiance of the UN Convention on the Rights of the Child, the Saudis continue to sentence children to death. Late term abortions, if you will.

On the upside, the "convicted" criminal is injected with a cocktail of drugs in order to prevent the decapitated body from scurrying around -- spraying blood all over the audience. So at least the decapitations are... audience-friendly?

Here's a Saudi executioner from the city of Mecca named Abdallah Bin Sa'id Al-Bishi describing his profession (don't worry, it's just an interview):

And there was the president at the Al Murabba Palace in Riyadh holding a sword not unlike the ones used by executioners like Abdallah Bin Sa'id Al-Bishi to decapitate children. There was the president, celebrating with Saudi authoritarians who preside over the world's 159th least democratic nation. To that point, only eight nations are less democratic than Saudi Arabia and those nations include Burma and North Korea.

So much for the moral choice between oppression and liberty, Mr. President. So much for our successful relations requiring the decent treatment of a nation's people. So much for human dignity guiding our policies.

Meanwhile, we're in the business of invading and occupying nations like Iraq even though the House of Saud helped to finance the 9/11 attacks. We're in the business of selling our national sovereignty to the Saudis at discount prices -- prices which were driven down by corporate malfeasance -- malfeasance which was encouraged by Bush Republican deregulation. We're in the business of merrily pumping Saudi oil into our cars while refusing to seriously conserve and, with our ridiculous hillbilly-defiance, we fool ourselves into believing that driving these vehicles is somehow "patriotic" while we accuse men like Al Gore of being unhinged.

Worst of all, the United States has been reduced to begging for relief like junkies -- hat in shaking hand. Forget the relevance of the swords as they relate to human rights and the awful truth still remains: despite the president's inaugural remarks and despite our national pride, we continue to grovel at the feet of the world's 159th least democratic nation in order to keep our economy and our way of life from collapsing. The least our president can do is to show some dignity by not glad-handing this oppressive regime -- while gripping their oppressive weapon of choice.