Jimmy Carter served as the 39th president of the United States, founded the Carter Center and was awarded the Nobel Peace Prize. President Carter is also a Sunday School teacher and has followed that avocation since his earliest years. In this interview, HuffPost's Senior Religion Editor Paul Brandeis Raushenbush spoke to President Carter by phone about the hardest questions presented in the Bible: from gays, science, the role of women, slavery passages and more. The former president offered answers to each of them with the insights and spiritual wisdom he has included in his latest book: "NIV Lessons from Life Bible: Personal Reflections with Jimmy Carter."

Paul Brandeis Raushenbush: Thank you so much for talking with me President Carter. As I warned, I am going to be asking the tough questions. So ... Did God write the Bible?

President Jimmy Carter: God inspired the Bible but didn’t write every word in the Bible. We know, for instance that stars can’t fall on the earth, stars are much larger than the earth. That was a limitation of knowledge of the universe or physics, or astronomy at that time, but that doesn’t bother me at all.

How do you approach the passages in the Bible that talk about God’s creation (Genesis 1:1) while maintaining a positive attitude towards science?

I happen to have an advantage there because I am a nuclear physicist by training and a deeply committed Christian. I don’t have any doubt in my own mind about God who created the entire universe. But I don’t adhere to passages that so and so was created 4000 years before Christ, and things of that kind. Today we have shown that the earth and the stars were created millions, even billions, of years before. We are exploring space and sub-atomic particles and learning new facts every day, facts that the Creator has known since the beginning of time.

What do you say to those who point to certain scriptures that women should not teach men or speak in church? (1 Corinthians 1:14)

I separated from the Southern Baptists when they adopted the discriminatory attitude towards women, because I believe what Paul taught in Galatians that there is no distinction in God’s eyes between men and women, slaves and masters, Jews and non-Jews -– everybody is created equally in the eyes of God.

There are some things that were said back in those days –- Paul also said that women should not be adorned, fix up their hair, put on cosmetics, and that every woman who goes in a place of worship should have her head covered. Paul also said that men should not cut their beards and advocated against people getting married, except if they couldn’t control their sexual urges. Those kinds of things applied to the customs of those days. Every worshipper has to decide if and when they want those particular passages to apply to them and their lives.

A lot of people point to the Bible for reasons why gay people should not be in the church, or accepted in any way.

Homosexuality was well known in the ancient world, well before Christ was born and Jesus never said a word about homosexuality. In all of his teachings about multiple things -– he never said that gay people should be condemned. I personally think it is very fine for gay people to be married in civil ceremonies.

I draw the line, maybe arbitrarily, in requiring by law that churches must marry people. I’m a Baptist, and I believe that each congregation is autonomous and can govern its own affairs. So if a local Baptist church wants to accept gay members on an equal basis, which my church does by the way, then that is fine. If a church decides not to, then government laws shouldn’t require them to.

What about passages saying slaves obey your masters? (Colossians 3:22) Do you think there is ever a time to say, ok, we know that we don’t agree with that passage, let's get rid of it?

Well, the principles of that are still applicable. It wasn’t a matter that the Bible endorses slavery, it was that throughout history, now and in the future there are going to be some who are in a subservient position like when I was commanding officer of a ship when I was in the submarine corps. It is meant to preserve the basic principles that don’t cause resentment or hatred or betrayal or false attitudes. But it also says that a master should respect your servant. So, it works both ways.

Jesus says I am the way the truth and the life (John 14:6). How can you remain true to an exclusivist faith claim while respecting other faith traditions?

Jesus also taught that we should not judge other people (Matthew 7:1), and that it is God who judges people, so I am willing to let God make those judgments, in the ultimate time whenever it might come. I think ‘judge not that you be not judged’ is the best advice that I will follow. Maybe it is a rationalization, but it creates a lack of tension in my mind about that potential conflict.

There are many verses in the Bible that you could interpret very rigidly and that makes you ultimately into a fundamentalist. When you think you are better than anybody else -- that you are closer to God than other people, and therefore they are inferior to you and subhuman -- that leads to conflict and hatred and dissonance among people when we should be working for peace.

There is a scripture passage attributed to Jesus “Do not think that I came to bring peace on earth, I did not come to bring peace but a sword” (Matthew: 10:34) How do you interpret that, in light of your basic belief in Jesus as the Prince of Peace?

For the last 35 or more years, my wife and I have read the Bible last thing every night and just last week we read that passage and discussed it a little bit. What Christ was saying was that when we have conflict in our mind or hearts, between our secular duties and teachings of Christ, we should put the teachings of Christ first.

He was predicting what would happen, that his teachings might cause divisions among people as they decided to follow God’s ordained duties such as peace, humility, service to others, alleviation of suffering, forgiveness -- when we face those conflicts, we should adhere to the principles that never change, to the moral values that are taught through religion.

Should we approach the Bible literally, or metaphorically?

The example that I set in my private life is to emulate what Christ did as he faced people who were despised like the lepers or the Samaritans. He reached out to them, he reached out to poor people, he reached out to people that were not Jews and treated them equally. The more despised and the more in need they were, the more he emphasized that we should go to and share with them our talent our ability, our wealth, our influence. Those are the things that guide my life and when I find a verse in the Bible that contradicts those things that I just described to you, I put into practice the things that I derive from my faith in Christ.

PHOTOS of President Carter's Many Honors And Activities Around The World 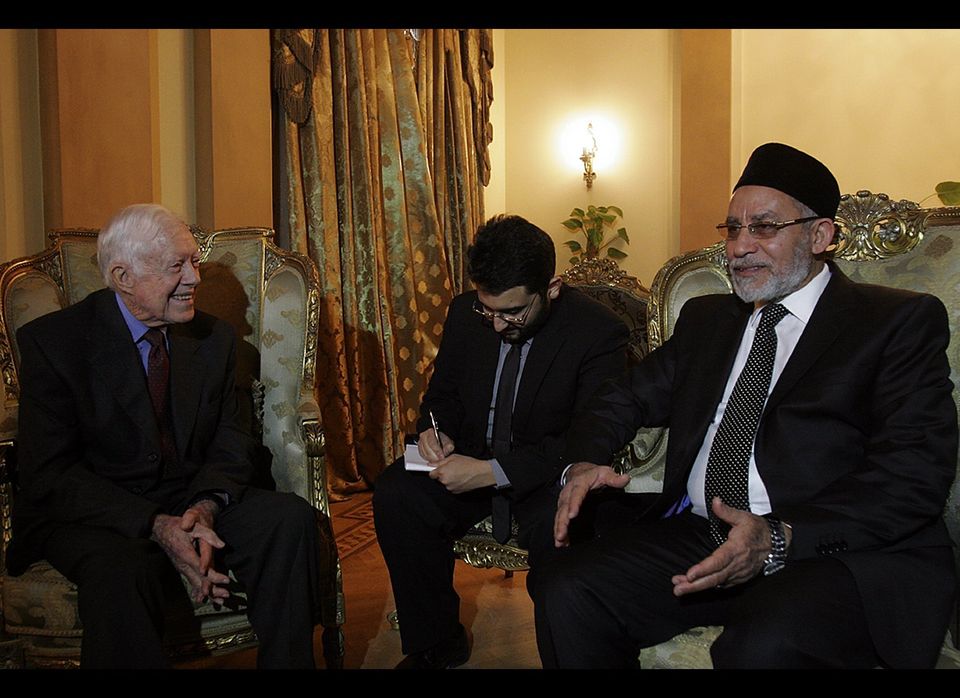 1 / 9
Egypt
Mohammed Badie, head of Egypt's Muslim Brotherhood, (R) speaks with former US president Jimmy Carter during a meeting in Cairo on January 12, 2012. The Carter Center is one of the few monitoring groups to have had a licence to witness Egypt's first post-revolution election, in which the country's two main Islamist parties have scored a crushing victory. AFP PHOTO/STR
Getty