President Barack Obama had an up-close encounter with Denver's marijuana subculture during a stop in the city on Tuesday night. In a video posted on Instagram, a man in the crowd can be heard asking the president, "Do you want a hit of this?"

Obama doesn't reply, but laughs off the request.

The person who posted the video, who goes by the username manton89, wrote: "Asked him if he wanted a hit of pot...he laughed! #legalizeit #iinhaled #mrGQ"

He also posted a photo of the president with a pool cue. He doesn't say where he took the photos, but it appears to be the Wynkoop Brewing Company, where Obama and Colorado Gov. John Hickenlooper had a brew and shot some pool.

It wasn't Obama's only unusual encounter in the Mile-High City. Earlier, he shook hands with someone wearing a horse head mask: 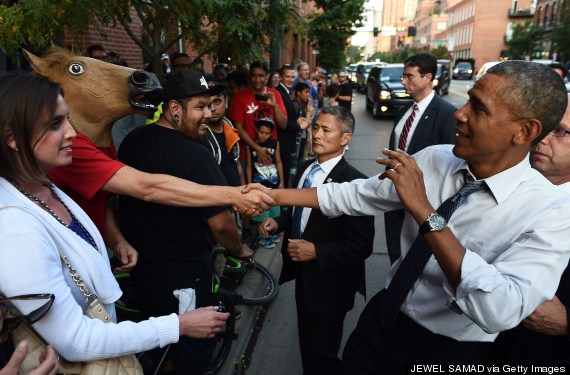 In politics, there are always a few neigh-sayers around.

The mask is already an Internet meme, but the presidential encounter with it is threatening to turn the image into a viral sensation:

"Check out the guy in the Obama mask."
"Did no one tell him? Tuesday is horse mask day" RT @darth: “well…hello there" http://t.co/fPF7efsgUB