President Obama, I admire your unusual courage, you have been a hero, and a sane man in my books, and a coward a few times. 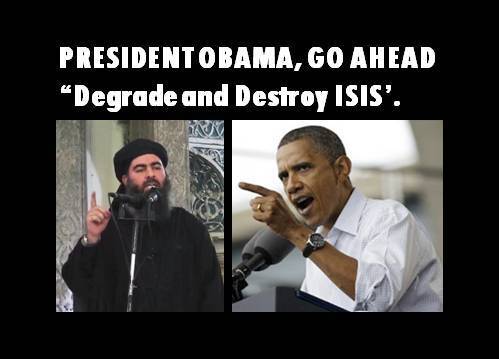 On behalf of Muslims, I strongly condemn the evil acts of Abu Bakr Al-Baghdadi for terrorizing Christians, Yazidis, Shiites and other minorities in Iraq. He is an evil man and must be caught and processed for his crimes against humanity, there is genocide in making, and I recommend a bounty be posted to get him dead or alive.

His ultimatum to the Christians is despicable, "We offer them three choices: Islam; the dhimma contract -- involving payment of Jiziyah; if they refuse this they will have nothing but the sword."

As I wrote previously, no one should have the right to chase any one out of their own homes. The Quran recommends severe punishment to the oppressors and suggests hunting them down where ever they can be found and punishing them accordingly, unless they sincerely repent and back off, and if they do back off and surrender, they go to Guantanamo for a full orderly trial that US law permits. If those specific individuals don't surrender, drone them! Go ahead, degrade and destroy them.

However, we should never lose civility in our dealings with these men, and should not produce excuses in making innocent civilians a collateral damage, a shameful word in history of civilizations.

Muslims have been praying for the safety of Christians, Yazidis, Shiites and other minorities who are victimized by these nuts, and they are sick of these rogues and will pray for you if you get rid of these men.

I trust you in getting those ugly ISIS guys without destroying innocent people, as you did with bin Laden. You removed him from the face of earth without being a destructive man and with least collateral damage, as a nation we thank you.

You have been one of the best foreign policy presidents we ever had; you rightly sided with the people of Egypt instead of the dictator Mubarak, and did the right thing with Iran. The neocons want nothing but destruction; a majority of humanity wants peace.

Your only failure is cowering to Netanyahu and sliding America from our higher moral grounds. You made us lose it by justifying the killing of nearly 2,000 Palestinians. You owe an apology to the Palestinians who want us to be a just people. They cannot look up to any one for justice. I am reminded of the Holocaust victims who silently faced the persecution while the world looked on.

We should continue to stand up for Israel, but not at the cost of justice to the Palestinians. Injustice to one is injustice to all. Be a moral president. You are a peace maker and hope you continue to earn your Nobel Prize.

Now, go ahead, and make our day. Give the ISIS guys a three days' notice: either back off, repent, surrender or face the drones.

Mike Ghouse is a public speaker, thinker, writer and a commentator on Pluralism at work place, politics, religion, society, gender, race, culture, ethnicity, food and foreign policy. All about him is listed in several links at www.MikeGhouse.net and his writings are at www.TheGhousediary.com and 10 other blogs. He is committed to building cohesive societies and offers pluralistic solutions on issues of the day.