"It would be transformative if everybody voted. That would counteract money more than anything. If everyone voted, it would completely change the political map in this country. Because the people who tend not to vote are young, they're lower income, they're skewed more heavily towards immigrant groups and minority groups. And, you know, there are often the folks who are scratching and climbing to get in to the middle class, and they're working hard. There's a reason why some folks try to keep them away from the polls, we want to get them into the polls. So that might be a better strategy, in the short term," [Referring to the time it takes to pass a constitutional amendment.]

The Beltway press was quick to overreact, from the reliably reactionary Washington Times first suggesting the President's remarks were a policy proposal, then claiming Obama retreated from the notion amid backlash. The backlash that The Washington Times cites as the reason we could never have the same participatory democracy as Australia, Brazil, and other countries? Marco Rubio "noting the decision to skip an election is a form of free speech protected by the First Amendment."

Matching this determined lack of thought with diligent overthought, The Washington Post already re-drew the 2012 election results with what the turnout would be if voting had been mandatory. They are able to make this prediction based on more of the same people voting, for instance, matching race with the exit polls and assuming that everyone else of that race and gender would vote.

Actually, mandatory voting would be the beginning of the end of racial polarization as a means for turnout. Once our elections are not being decided by extremists driven by single issues, our elected leaders will reflect the American people.

Citizens of countries that require voting have explained to me that while their leaders are still prone to embarrass themselves, they are far closer to the middle ground than in America. Only in Congress can the refusal to do your job be a safe path to keeping your job. If we have leaders so openly colluding against our government's functionality and diplomacy, it is critical to ask how we can regain control of our country from those that would do it such harm.

We conclude our documentary PAY 2 PLAY: Democracy's High Stakes with six proposals for electoral reform, the most controversial of which has been a similar call for mandatory voting. As such, I have been accustomed to confronting misperceptions about what this civic role would involve. It is striking how fiercely people will argue for the right to not vote after all that has been sacrificed for the right to vote in the first place. 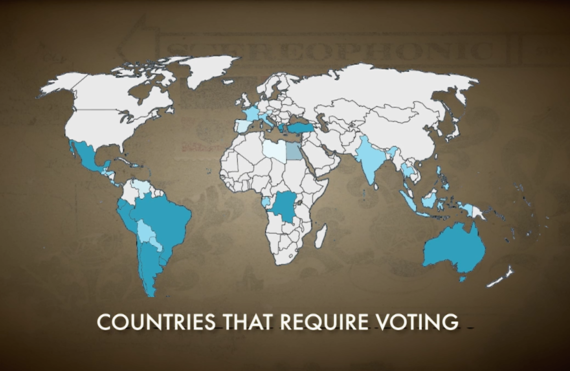 The foremost alarmed reaction to the idea of required voting is that it would somehow be "anti-democratic" or un-free for the government to make people participate in elections. Think about this for a moment: participating in elections, being undemocratic? The words "elections" and "undemocratic" are virtual antonyms. Yes, you can write in a candidate or cartoon character if you don't support the names on the ballot. But it is not un-free or un-democratic to involve the entire country in decisions that affect the entire country. This is how we regulate democracy. American democracy is already anemic from low participation and big money interests, with a Princeton study determining the US is now in reality an oligarchy. It is time Americans decide the future of America, not the richest with money to burn on anonymous political ads.

Is it that crazy for the government to require you vote? Isn't it a much bigger ask for the government to tell you to drop what you are doing, you are now going to war, and you'll probably die over some political B.S. that doesn't affect you? The U.S. government can issue a draft whenever it wants, and there are many who would be with us today if they hadn't made that sacrifice that our country asked of them. Does voting still seem so much to ask, especially when it can decided literally who lives or dies among us? (Did I mention you can vote by mail?)

The reality is that we are already spending a fortune in tax dollars on administering elections that two-thirds of the public are not showing up for. It is only cost-effective. Moreover, those concerned about in-person "voter fraud" should welcome compulsory voting--no more need to worry about if someone voted or not, because they all had to already. Verification is as easy as it is confirming you paid your taxes. This would make it harder for others to impersonate another voter, while offering an expected total. From there, the concern of voting experts would be on chain of custody and accurate counting of votes, something that is in the non-partisan interest of every American.

There are two types of people in our country -- those that want everyone's voice to count, and those that don't. I believe that when the U.S. embraces compulsory voting, it will be the beginning of fulfilling the potential of the American experiment in democracy. Thank you, Mr. President, for wanting every American's voice to count.