Last night, in response to America's latest horrific mass shooting, this time at Umpqua Community College in Roseburg, Oregon, President Obama pointed out that stricter gun laws save lives, a fact that is indisputable when gun death rates are compared by state. "We know that states with the most gun laws tend to have the fewest gun deaths," the president said.

President Obama is absolutely correct. My organization, the Violence Policy Center, regularly compares state gun death rates using data from the federal Centers for Disease Control and Prevention (CDC). Year after year, our findings are consistent: States with stricter gun laws and lower rates of gun ownership have some of the lowest overall gun death rates in the county. Conversely, states with lax gun laws and higher rates of gun ownership have the nation's highest gun death rates. 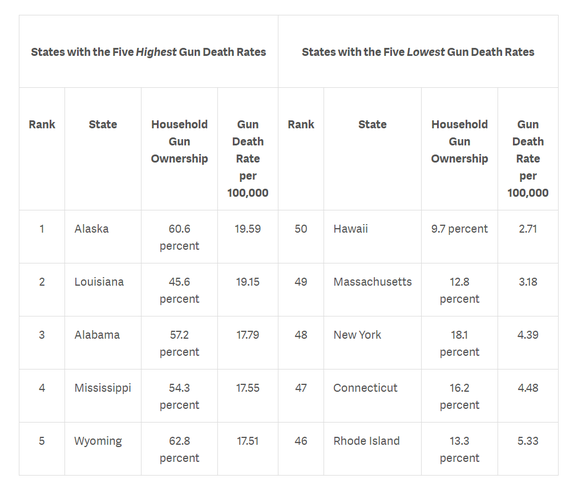 In 2013, the most recent year for which data is available, the state with the lowest gun death rate was Hawaii, followed by Massachusetts, New York, Connecticut, and Rhode Island. Each of these states has relatively strict gun laws and lower rates of gun ownership.

Oregon falls in the middle, with the 25th-highest gun death rate in 2013, but their rate is still above the national average. And it's important to understand that even the lowest state gun death rates far exceed those of other industrialized nations. For example, in 2011, the gun death rate in the United Kingdom was only 0.23 per 100,000.

As we continue to learn more about this latest mass shooting -- the harrowing details of the attack, the shooter's history and motives, the guns chosen to ensure its lethal outcome -- the underlying reality remains the same: Our nation's weak gun laws and easy access to unmatched firepower allow virtually anyone the ability to carry out such a lethal event. At the same time, the NRA and its financial patrons in the gun industry work to make sure the next mass shooter has all the tools he needs, by promoting and marketing increasingly lethal products designed with the sole purpose of killing as many people as possible in the shortest amount of time available.

The firearms industry can get away with this because guns are the only consumer product the federal government does not regulate for health and safety. Airplanes are regulated by the Federal Aviation Administration, and if a jetliner crashes, we immediately investigate the causes to prevent it from happening again. Food is regulated by the Food and Drug Administration. A food poisoning outbreak prompts authorities to trace the source of the contamination. Yet when guns are used to shatter lives and communities in mass attacks, we accept it, surrendering to what the National Rifle Association labels the "price of freedom."

That mass shootings have become so common that our reaction as a nation has, as the President said, "become routine," is grotesque. That we stand alone among Western industrialized nations in our tolerance of such carnage is shameful.