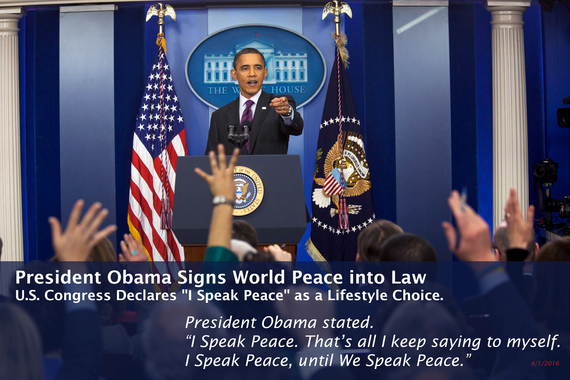 Early Friday morning the White House announced they signed into Law a Peace deal with Communist Leaders around the world with the full support of Republicans and Democrats.

This is the first bi-partisan law to pass the U.S. Congress with no filibusters.

President Obama proudly boasted how his commitment to Peace finally become a reality for members of the U.S. Congress.

"I'm moved to tears with how simple world peace can be." Sniffled Paul Ryan

At the White House Press Conference - Oprah Winfrey went back to her reporter origins to personally interview President Obama.

"Why do you think it took so long for our world leaders to get what the global population has known for centuries? How we speak creates our world."

Obama credited social media website Twitter, Facebook, and others for connecting the people and exposing the leaders who just didn't seem to understand that how we speak creates the world we live in.

Presidential candidates on the campaign trail quickly claimed their connection to author of "I Speak Peace" Luis A Moro, as being their personal private consultant.

Donald Trump was quoted saying. "I've known Luis Moro since the 90's. Its people like him who make America great. That's why I'm asking all my supporters who can read to buy 'We Speak Peace' immediately."

Hillary Clinton, confessed to having a crush on the author.

"I love Luis Moro so much. Luis broke my heart. To this day I hear his voice everywhere I go. I Speak Peace because of Luis".

Bernie Sanders bragged about skiing with the author when LA Moro was just a lad in Vermont.

"His close friends know him as LA Moro. He's a great skier. My entire platform for Presidency is based on LA Moro's books."

Obama said all I did was read the book I SPEAK PEACE. Then I gave a copy of I SPEAK PEACE to every Government employee and contractor. Amazon's CEO Jeff Bezos confirmed Luis Moro's books are the most purchased books in Amazon history.

Amazon's Bezos said. "I'm proud of my fellow Cuban Luis Moro. I was impressed with his leadership in changing US-Cuba Policies with his film Cuba's Love & Suicide. He really out did himself by creating world Peace with 'I Speak Peace'. Over 50 million copies have sold in the last week alone."

The Vatican Announced, Luis is up for Saint Hood in conjunction with his Nobel Peace Prize nomination introduced by U.S. Senator Elizabeth Ann Warren. In Pope Frances recently calls for Peace the Pope sent Moro this public message.

"Acere! ¿Que bola? Come tour with me this summer."

"I first met Luis when I went to his book signing event in Santa Barbara, CA. 'I am A Professional Parent' was the inspiration of the 'fully functioning, self-determining' mythology that's been transforming individuals, companies, and governments around the world."

President Barack Obama and First Lady Michelle both tribute their inspiration to create a fully functioning, self-determining planet to Luis A. Moro.

"My Boo goes to sleep reading 'I Speak Peace'. For me it's like Luis Moro is 'next to me' holding me, every night. Good thing I got Anais Nin game."

Stated First Lady Michelle Obama with a huge smile on her face.

The White House is asking all citizens around the world to simply read I SPEAK PEACE and declare Peace a worldwide lifestyle choice.