When Maria Pacheco lived in Mexico as a young girl, she only saw her father once a year when he took vacations from his job at a nursery in Northeast Ohio. During the years of separation, Maria's dream was to have her family together again. Fourteen years ago that dream seemed to be coming true when Maria and her mother came to the United States to be reunited as a family.

For years Maria's parents were involved in the community and attended weekly meetings at HOLA, a community-based organization in Painesville, Ohio. It was at one of HOLA's meetings that Maria learned about Deferred Action for Childhood Arrivals (DACA). She remembers that Tuesday night clearly, since the meeting room was packed with community members eager to learn about President Obama's announcement on administrative relief. Maria immediately applied for DACA.

"When I received my DACA documents in the mail, I remember they said 'authorized to work.' I wanted to work so badly. I applied everywhere," said Maria. "I finally was hired at a store in the mall. I was using my ID card with my name on it, and I was so happy to work there, just like any other teenager."

Later she worked at a local pizzeria to avoid the long ride to the mall. She worked diligently for two years and was promoted to assistant manager. Many Latino families became clients after Maria started working at the pizzeria, helping the business flourish. They were relieved to find someone who could speak to them in their native language.

Maria's ability to bring in customers who otherwise would have struggled to order their food was possible because of the work permit she obtained through DACA. According to the White House Council of Economic Advisers, the president's executive actions would increase the gross domestic product by $90 billion to $210 billion, signifying a major boost to the economy. Maria's case is a real-life example of how that happens. 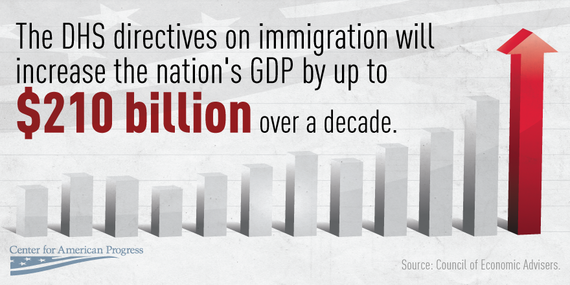 DACA has changed Maria's life. Since receiving it, she has obtained a job and is able to pay her taxes, and she will soon attend Lakeland Community College. Maria recently became the president of the HOLA youth program and plans to engage and empower other Latino students like her. In May Maria will also receive a teaching certificate from the Auburn Career Center. It will allow her to work with students as she pursues her career in education. Maria has already been offered a job working with young students during the summer.

"I always wanted to be a teacher. Teachers are role models who contribute to this nation," said Maria. "Immigrants, like teachers, have a lot to offer to our country."

There are still millions of families waiting for the extension of DACA and the implementation of Deferred Action for Parents of Americans and Lawful Permanent Residents. Maria's story is one example of how these programs can create a positive impact in the community and the economy. The administration continues to push for the implementation of these programs, and Maria hopes the momentum doesn't stop.

"I want to tell the president to keep trying, to not give up!" said Maria. "I believe in you, President Obama; my parents should be next. I want to keep my family together."

This piece was first posted to the NCLR Blog.