On Wednesday, in a speech in Elkhart, Indiana on strengthening the American people's economic security, he proclaimed:

"It's time we finally made Social Security more generous and increased its benefits so today's retirees and future generations get the dignified retirement that they have earned."

By calling for the expansion of Social Security, the President forcefully challenged the lie at the center of a destructive thirty-year, billionaire-funded campaign to dismantle Social Security. That campaign has sought to achieve its goal by convincing the American people that the United States cannot afford our Social Security program.

As the following chart shows, our Social Security benefits are among the lowest in the industrialized world.

Moreover, Social Security provides those modest benefits extremely efficiently. Out of every dollar spent, less than a penny goes to administration. The remaining 99 cents goes to benefits.

It seems absurd on its face that the wealthiest nation in the world at the wealthiest moment in its history cannot afford those modest benefits provided so remarkably efficiently. The truth, of course, is that the nation can easily afford a vastly expanded Social Security program. As the following chart shows, Social Security spends around half what many other industrialized countries spend on their counterpart programs. Indeed, it is projected that, at the dawn of the 22nd century, Social Security will cost the nation only about six percent of GDP, considerably less than most other industrialized countries are spending on their counterpart Social Security programs today! 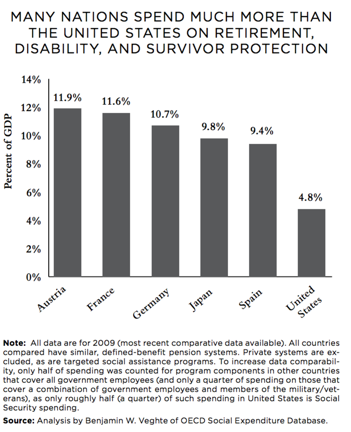 Notwithstanding the unquestionable affordability of Social Security, the billionaire-funded campaign has used its huge resources, its media savvy, and its political access to convince Americans that Social Security will not be there in the future. The lie of unaffordability, repeated enough, has become accepted conventional "wisdom."

Distressingly, the lie, masquerading as conventional wisdom, has had two devastating consequences. First, though the anti-Social Security campaign has not succeeded in cutting cash benefits, it has eliminated an intangible Social Security benefit. The program is supposed to provide, as its name indicates, the benefit of security, peace of mind. But polls show that too many Americans believe that Social Security is unaffordable and so will not be there for them in the future. Perhaps not surprisingly, numerous surveys show that not having enough money in retirement is the top financial concern of most Americans, an even higher concern than, for example, being able to pay medical bills in the event of a serious illness or the concern of not being able to pay for college.

In addition, the lie of unaffordability, promoted by the campaign, has caused gridlock and blocked progress. Instead of a productive debate about the desired level of benefits and the fairest way to allocate the costs, the lie of unaffordability has caused the elite conversation over the last twenty years to focus on how politicians can cut Social Security without getting thrown out of office. As recent history has shown, the answer is that they can't.

Social Security's benefits are modest but vitally important. They are most Americans' most significant, and often only, retirement annuity, life insurance and disability insurance. Those benefits account for more than half the income of four out of five people receiving disability insurance, and two out of three seniors receiving retirement benefits. They account for virtually all of the income of one-third of senior and disability beneficiaries. And the children who receive Social Security live in families with considerably fewer resources, on average, than other families with children. Moreover, though created to allow workers to maintain their standards of living and so prevent, rather than alleviate poverty, Social Security nevertheless lifts over 20 million Americans, including over a million children, out of poverty, and lessens the depth of poverty for millions more.

Furthermore, Social Security benefits are projected to be even more important to future generations of beneficiaries, as a result of the disappearance of private sector traditional pensions and their replacement by the wholly inadequate 401(k) savings plans, a totally failed experiment. As a consequence of those and other factors, the nation is facing a looming retirement income crisis, where most workers will be unable to cease work without a drastic reduction in their standards of living. Over half of American households headed by someone of working age will not be able to maintain their standards of living in old age, and this figure rises to roughly two-thirds when health and long-term care costs are also considered.

Particularly after President George W. Bush's failed efforts, policymakers realized that, given the importance and popularity of Social Security, cutting Social Security in the sunshine was not an option. They hoped that it could be done through undemocratic fast tracking of legislation crafted behind closed doors, away from the eyes of the American people and the groups in Washington that represent them. Notwithstanding years of trying, though, this didn't work.

The deadlock and lack of progress created by the lie of unaffordability is now poised to be broken, however. Fortunately, at the same time that some in Washington sought to cut Social Security behind closed doors, others were working more constructively. President Obama's eight years saw the growth of the movement to expand Social Security. This movement implicitly challenged the conventional "wisdom" that Social Security is unaffordable and has to be cut. If Social Security can be expanded, surely it can be afforded.

Over the last few years, the idea of expanding Social Security has become a steadily growing movement within the Democratic Party. Around a dozen expansion bills, analyzed for actuarial soundness by the Social Security Administration's Office of the Chief Actuary, have been introduced in this Congress alone. Expansion has been embraced by 90 percent of all Senate Democrats and 75 percent of all House Democrats. It has also been embraced by both Democratic presidential contenders, Secretary Clinton and Senator Sanders. And this week it was embraced by the leader of the Democratic Party, the president himself.

Having the president himself embrace the concept is enormously important. Unlike others in his Party, the president will never run for any elected office again. He obviously embraces the concept because he recognizes its soundness and wisdom. The assurance of a sitting president is what has been needed to puncture the lie of unaffordability and restore the confidence of millions of Americans who have bought the lie that Social Security won't be there for them.

Now that the lie of unaffordability is increasingly being exposed, the debate can become an honest one. It can become, as it should be, a debate about values and what kind of country we want. Once the debate is no longer distorted by the false premise that we must cut Social Security, the questions will become unbiased: Should Social Security be expanded or cut? What is the fairest way to distribute the cost of the level of benefits agreed upon?

And it will become an easy debate, as well. The American people are overwhelmingly united. Poll after poll shows that Americans support Social Security, believe it is more important than ever, would like to see its benefits increased, adamantly oppose cuts to those earned benefits, and believe that, given how much of the nation's wealth has flowed to those at the top, the wealthiest among us are the ones who should pay more. This is a debate that can be held in the sunshine, through the regular legislative process as has been the case historically with respect to important Social Security legislation.

Because of the effectiveness of the lie of unaffordability, the American people have not been presented with a clear electoral choice on the issue of Social Security for too many years. Buying the lie that the program had to be cut, politicians routinely talked of the need to "save" Social Security and vaguely urged a "bipartisan solution." Democrats and Republicans were indistinguishable, since both sides used the same rhetoric. Now the lines are clearly drawn.

Plenty of other Democrats have introduced detailed proposals to expand Social Security. That is not necessary to make his mark. Indeed, given the intransigence of Congress, it would be a futile, meaningless gesture. Nevertheless, President Obama can have a profound impact on the issue in the waning days of his presidency. He can use his bully pulpit to complete the process of converting the Social Security debate back into an honest one about values and competing visions of the future.

If President Obama continues to speak forcefully for the expansion of Social Security, as he did this week, he will leave office with a legacy that historians of Social Security will recognize as important and lasting. He will have paved the way for a future President and Congress to increase the economic security of working families by expanding Social Security. That is a powerful legacy that will benefit hundreds of millions of Americans, now and in the future.