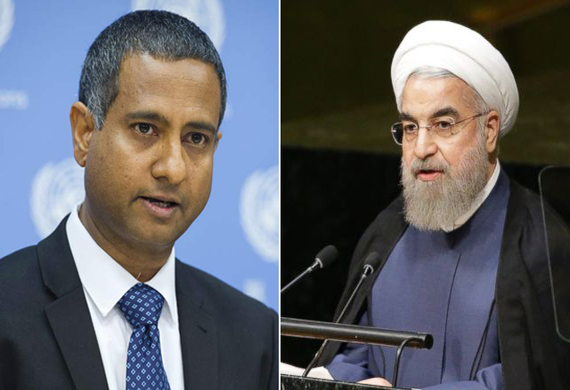 Iranian President Hassan Rouhani spent five days in New York, culminating his speech during the opening of the United Nations General Assembly on Monday, in which he repeatedly stressed the need for implementing the nuclear agreement. What he did not speak much about was implementing Iran's human rights obligations. As part of the deal, Iran agreed to allow international inspectors extensive access to the country's enrichment facilities. Rouhani's government claims that it wants to demonstrate compliance with the Non-Proliferation Treaty--a sentiment he reiterated in his speech to the United Nations. Iran, however, is a signatory to several UN human rights treaties as well. So, as the Iranian government prepares to lay bare its most sensitive operations to dozens of the U.N.'s International Atomic Energy Agency inspectors, it should also welcome the one individual charged with monitoring human rights, the UN Special Rapporteur on Human Rights in Iran, Ahmed Shaheed. The Special Rapporteur is the person assigned by the international community to address human rights violations in the country. His mission is to document human rights developments and to work with the government to bring state practices into compliance with its legal obligations. Despite seven formal requests over the last four years, Shaheed has never been granted entrance to the Islamic Republic. As Iran gets ready to allow nuclear inspectors into the country, authorities should also be expected to embrace a transparent and cooperative approach toward human rights and allow the Special Rapporteur to investigate the reality within its borders. Naturally, Rouhani attempted to capitalize on the wave of international goodwill Iran has accrued as a result of his government's vigorous pursuit of the historic diplomatic agreement over its nuclear program. World leaders meeting with Rouhani on the sidelines of the UN to discuss closer diplomatic and trade relations, however, must not let human rights go by the wayside. At the UNGA, Rouhani reminded us he was elected in 2013 on a promise an to pursue constructive engagement on the nuclear deal and end economic sanctions that were crushing his nation's economy. What he neglected to mention is that he was elected equally because he promised to improve human rights situation of the Iranian people. YouTube videos of Iranians celebrating the agreement show that, with the era of sanctions behind them, the people feel that the time has come for human rights. They chanted, "Our next agreement will be on our civil rights!" Those revelers are right. Rouhani has kept his promise to do what it takes to end sanctions by rolling back Iran's nuclear program, shoring up tremendous political capital with his people. This newly found feeling of goodwill and trust should encourage him to genuinely take on domestic reform, not shy away from it. That is why it was noticeable that Rouhani made no mention of human rights when addressing other world leaders. The list of human rights abuses we know about is in Iran long and shocking. Iranian Foreign Minister Mohammad Javad Zarif's statement to Charlie Rose that "We do not jail people for their opinions" was so false that it caused an outcry even from Zarif's supporters. Currently, there is no real room to express dissent in Iran. Indeed, Iran is the world's leading jailer of journalists, including Washington Post correspondent Jason Rezaian and reformist journalist Kayvan Mehrgan, among at least 40 others. Journalists, human rights defenders, and other prisoners of conscience fall victim in Iranian prisons to cruel form of psychological and physical abuse. I know this firsthand, having myself spent time in prison for reporting on human rights issues. What's more, the rights of Iranian women are deteriorating in Iran, as new laws and policies are requiring them to jump through more and more hoops in order to be present in the workplace, the classroom, and municipal government buildings. Iranian Vice President for Women and Family Affairs Shahindokht Molaverdi has spoken out against these polices but to little avail. What happens to ordinary women that challenge these laws? Just look at the case of Atena Farghdani, a 28-year-old woman sentenced to 12 years, largely for posting an illustration she drew on Facebook that mocked Iranian parliamentarians for passing a law limiting access to health care and family planning. These trends have been documented by the Special Rapporteur. Impressively, even from afar, Shaheed has diligently compiled detailed reports of the human rights abuses taking place in Iran. But addressing these violations requires a commitment from the Iranian government, which has to begin with on-the-ground access for the Special Rapporteur. Rouhani needs the full assistance of the UN if he is going to tackle needed human rights reforms. A visit by the Special Rapporteur lays the foundation for a working relationship with the UN and real improvement in the respect for human rights. Just as the arrival of IAEA inspectors will demonstrate the dawning of a new age of transparency in nuclear development, granting Special Rapporteur Shaheed entry would send a clear signal, both to the Iranian people and to newly acquired international trading partners, that Rouhani is ready to begin focusing on human rights within his borders.