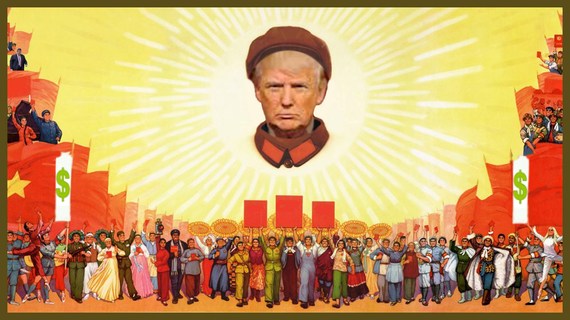 Through his empty bravado and saber rattling about trade, South China Sea islands, and Taiwan among other issues, Mr. Trump should think twice about antagonize China. Yet, China is less worried when one considers it holds about 10 percent of U.S. debt and has no reason to be concerned as our nation continues to borrow more money to pursue and finance more wars and more conflicts.

Only two weeks into his presidency, Mr. Trump's domestic and foreign policies reveal more chaos and ambiguity than one could imagine. On one hand, it suggests lack of strategy and poor planning when it comes to, for instance, Executive Orders such as the ban on immigration. On the other, it demonstrates the administration's poor understanding of foreign policy matters including China, Iran, and Europe among others.

Mr. Trump will be hard pressed to tune down his rhetoric because when it comes to China, context matters. It is very easy to blast China until you realize how easy it is for China to sink your economy because it holds much of your debt. It is easy to play hardball and flex your muscles until you find out your leadership and credibility on the world stage amounts to nothing because a single veto vote from China at United Nations Security Council (UNSC) could paralyze the US politically.

This comes on the hills of two key issues. First, China's recent warning to the US regarding the South China Sea islands in response to the recently confirmed Secretary of State, Rex Tillerson's statement, "China's militarizing the islands is akin to Russia's taking of Crimea." Second, Chinese President, Xi Jinping's recent statement, "We must remain committed to developing global free trade and investment," at the annual meeting of global political and economic leaders in Davos, Switzerland indicates that China's readiness to assume global leadership and provision of economic openness is inevitable.

One thing sure: the cancellation of the Trans-Pacific Partnership or TPP will certainly be a gift to China. Hence, China may soon find itself the sole guarantor of the global free trade.

As to the One China policy regarding Taiwan, Mr. Trump will find it very challenging to reverse the 40 years policy that defines US-Sino relations. Upsetting this balance will have serious economic, diplomatic, and even military ramifications. Similar argument could be made about South China Sea dispute. Washington should see the writings on the wall when China, recently, decided to install more advanced weapons in the South China Sea. Is China sending a message to Mr. Trump? Is China defying the World tribunal's recent rulings? Is this China's approach to cement and project its global power? The answer is yes, yes and yes!

Another issue that looms large: energy. China's use of energy cannot be ignored. Could this explain its increasing footprints in the Middle East? I say so. China's demand for Middle East oil continues to grow. Equally important, China's bilateral agreements with Iran did not happen in a vacuum. Said differently, because of the lifting of sanctions on Iran, China expects the flow of oil from Iran to remain uninterrupted. In return, China will upgrade Iran's military hardware, if it has not already done so.

Of note: Recently, China provided Iran with its 25-year strategic cooperation plan that will see an increase in trade between to the two nations for up to $600 billion in the next decade. Will China and Asia - for that matter - be the next economic hub? I say so!

The challenge for Mr. Trump is to figure out how to decrease, if not limit, China's increasing footprints and interests in the Middle East. Yet, Mr. Trump's foreign policy team might be unable to do so since China realizes how important the Mideast is to not only its economic growth, but also its global prestige. As the region descends into more chaos, I believe China is not willing to sit on the sidelines anymore.

The other motivation is that China's foreign policy elites conclude that, due to disastrous foreign policy and weak leadership, the United States is no longer interested in the Middle East as it once did. The call by Mr. Trump for an isolationist US foreign policy supports China's argument.

By China's standard and most of the world - for that matter - Mr. Trump is a foreign policy novice. He ought to be well-seasoned, politically speaking, to know and understand how to navigate these diplomatic waters especially when it comes to China.

Mr. Trump's urgency in addressing China could not come at a crucial time as the latter continues to expand its presence on the Mideast stage. My reference is to the increased high-level visits by Chinese officials to the region. For instance, China engaged the Arab league organization and recruited nine countries in the region including Egypt and Saudi Arabia to sign up as founding members of the new China-led Asian Infrastructure Investment Bank. While this might not suggest that China is replacing the United States' leadership in the region, it certainly sends a message that it is just a matter of time before China and Russia - for that matter - coordinate their efforts in setting up the agenda for the Middle East. Should that become the case, will Mr. Trump embark on a militarized foreign policy to confront China? Or, will he start to learn the art of diplomacy and engage the Chinese to protect our interests in the region? The answer is anyone's guess.

One thing sure: China will continue to be prudent and not entangle itself in the seemingly intractable conflicts of the Middle East. My fear is that in the absence of US direction along with Mr. Trump's foreign policy inexperience, look for China to fill the vacuum left by America's withdrawal from the global stage. After all, Mr. Trump could discover that a military conflict with China is no small matter.