Mom had the disease for a lot longer than she ever let on. In fact, she was a master at hiding what was happening right under the noses of my brother, other family members, her friends, strangers, and me. Now that Mom is gone, and I have learned so much about Alzheimer's, I can almost pinpoint when it started. My mother hid the symptoms of Alzheimer's for close to seven years. Seven. Years. Count'em.

We are getting ready to select a president to lead our great country for four, maybe even eight years. The elected head of the most powerful country in the world could have the beginning signs of Alzheimer's right now and we would not know it for years. My mother made some bad decisions - too many lottery tickets, driving while lost, replacing an expensive built-in microwave on a house we were going to leave. 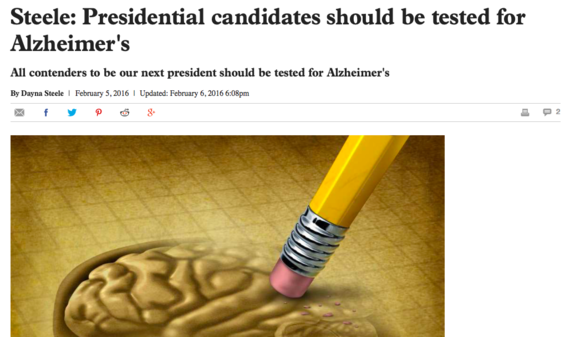 She did not have access to the nuclear launch codes. She did not meet with world leaders. She did not make decisions on the national economy, education, LGBT rights, women's rights, when to go to war, immigration and more.

Many of the presidential candidates have released their medical records. All seem to be in pretty good shape, something I feel is a necessity to run our country.

But I don't see anywhere that any one of them has been tested for Alzheimer's. And if they have, where are the results? Once elected president, he or she will have a regular checkup and be monitored closely. But I still can't find any mention of testing for Alzheimer's. Ron Reagan Jr. has said many times that he is fairly certain his father, President Ronald Reagan, was showing signs of the disease his last year in office. That should concern you. Now.

I want to know that the candidate I choose not only supports my priorities but is also of sound mind - a mind that will last through four or eight years. I watched my mom go from making bad decisions and forgetting things to extreme bouts of violence, an inability to walk or talk, and total memory loss in less than three years. Three. Years. Count 'em again. Such a person in the White House would prove to be a catastrophe we could all have helped to avoid by insisting our candidates be tested for Alzheimer's disease and release the results to the voting public.

Presidential Health: Do We Know Enough About Our Candidates? « CBS Baltimore

If you are under the age of 50, Alzheimer's disease is probably not anywhere on your radar. It certainly wasn't on mine. I was blindsided by Mom's diagnosis. However, according to neurologist, Dr. William Justiz, "There most definitely is a way to test all the candidates. You can see amyloid in patients as young as 40 years of age by conducting a PET scan using flutemetoral, flobetapir or Pittsburgh compound B (PIB)."

That statement might as well be in a foreign language for the majority of us, but since such a test exists, it needs to be done on the candidates before they take office, before they are elected - and - continued while in office.

In the neurologist section of my forthcoming book, Surviving Alzheimer's' with Friends, Facebook, and a Really Big Glass of Wine, Dr. Justiz also says, "Even in the earliest stages of this disease the patient may not understand that they have an issue. They are either in denial, or the disease has affected the part of the brain that allows them to understand that there is truly a problem."

According to current statistics on the Alzheimer's Association website:

Until it is too late like it was with Mom.

Dayna Steele is the creator of the 101 Ways to Rock Your World book series, a popular business keynote speaker, and the author of Surviving Alzheimer's with Friends, Facebook, and a Really Big Glass of Wine.