A new survey from GenFKD has confirmed our suspicions: Presidential candidates are not discussing the issues important to America's largest eligible voting demographic, the millennials. And Gen Y has noticed.

When asked whether or not the presidential candidates were addressing the issues close to them, roughly 86 percent of respondents, all aged 18 to 34, reported feeling left out of the conversation. 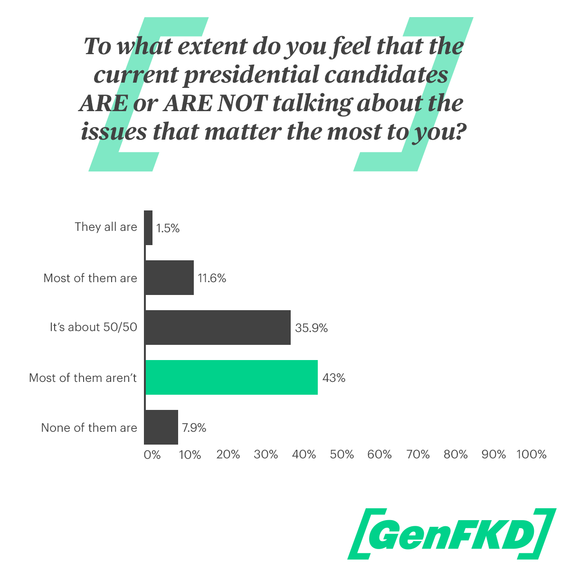 A Lot to Vote For

Not only do millennials make up the largest eligible voting bloc, but they have also been profoundly affected by the 2008 recession, with most graduating into a lukewarm economy with a mountain of student loan debt to boot.

From falling marriage and birth rates to a generational stereotype of college-educated Starbucks baristas, the impact is evident. This post-recession economy, coupled with the student debt crisis, has made for an inhospitable environment to come of age in.

"It is very disappointing that the presidential candidates are ignoring a vital demographic group and the issues that matter most to millennials," said Justin Dent, president and co-founder of GenFKD. "With an uncertain economy and international instability, millennials are more engaged than ever in the upcoming election, yet they are left out of the discussion."

The GenFKD Millennial Sentiment survey, which polled 752 millennials online from December 15 to 22, 2015, also found that millennials do care about jobs and the economy, contrary to popular belief. In fact, the economy is the number one issue on their minds heading into 2016, followed by climate change (14 percent), health care (11 percent) and student debt (10 percent). 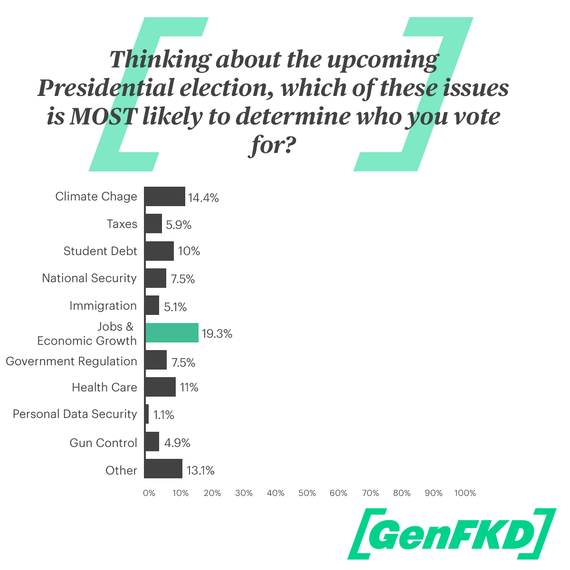 "Millennials are clearly concerned about the economy they will inherit, and the opportunities available to them," said Christopher Koopman of the Mercatus Center, a research center dedicated to bridging the gap between academic research and public policy issues at George Mason University.

"Unfortunately, political candidates have a strong incentive to support special interests over the causes that matter most to young people. There is a danger in doing that because millennials are concerned, active and engaged."

The upside? Gen Y is finally ready to take action.

The GenFKD Millennial Sentiment survey also found that approximately 83 percent of those surveyed are "somewhat likely" or "very likely" to vote in the 2016 presidential election, a number large enough to sway the election for the third time in a row. While we may not have padded wallets, we do have strength in numbers. 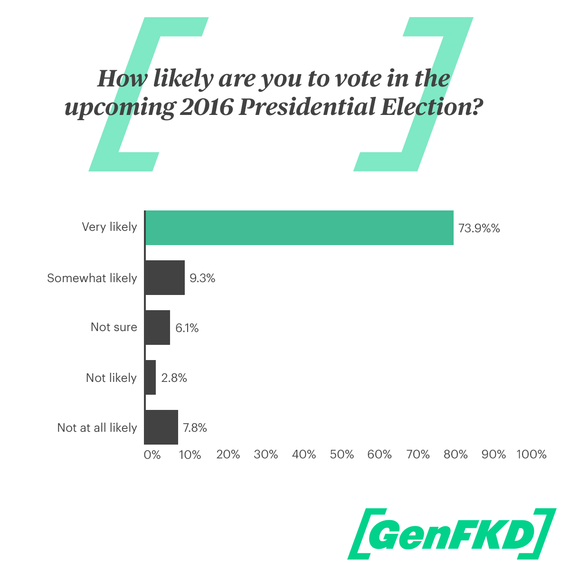 "Until now, there have been less than a handful of millennial issues addressed in hours and hours of debates and interviews," said Dent, a student at the University of Maryland. "We're worried about jobs and graduating into a nation of the underemployed."

Instead of targeting millennials via celebrity endorsements and ugly holiday sweaters, it seems Gen Y would rather the presidential candidates actually address the issues affecting their futures.