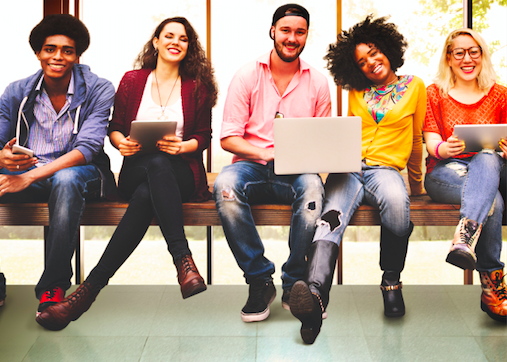 With the upcoming Presidential Election on the horizon, I can't help but reflect on the messages and practices of the leading candidates, and how that will affect the youngest workers amongst us.

Donald J. Trump wants to Make America Great Again, which clearly implies that it wasn't, or hasn't been, in the past. His catchy phrases and in your face politics actually resonate with many voters; hence his rise to the top of the Republican ticket. I think he presents concerns that many whisper about behind closed doors, but don't speak out in the open -- especially in very liberal communities like Marin County, California, where I raised my children.

Build a wall, make the tax code simple, keep more of your money.

Trump has flaws too; like his purported mistreatment of women, supposed lack of foreign policy or hesitation on releasing his tax returns. Yet there is no denying that he will not back down from a fight, and I respect that.

On the other side is Hillary Clinton. She leads the Democrats by holding her head up high and resonating with gads of political experience.

But Clinton has made mistakes too (see some in an article that recently appeared on Ralph Nader's site). She offers defensive explanations for her spouse's past mistakes and has displayed potentially questionable dealings behind the same closed doors where people whisper. Even so, I give her enormous accolades for being the first woman to be seriously considered.

Both candidates have issues, but at this stage of the game, both are the best our country has to offer. They made it to where they are by grit, determination, strategy and by forging ahead.

I believe that whomever wins will surround themselves with the best of the best, calm down a bit, stop attacking and get stuff done. What they don't know, they will learn by bringing in the ones who do. Where they don't relate, they will consult with top consultants in the how to relate to those that didn't vote for you business.

It will be joyous for some, disappointing for others, but exciting all the same as our country moves forward with purpose.

As I sift through the intensity during the final days of this election, my question is this: What advice do Trump and Clinton offer to the youngest tier of American workers when it comes to forging ahead with their own professional lives?

According to a recent Pew Research study, Millennials (ages 18-34) have now surpassed Baby Boomers as the largest population. Our nominees need to pay close attention to this statistic; this group is our future.

I happen to have three under my own roof:

So what do our top candidates tell our youth that are as varied as my own kids? Move forward with pride, honesty and authenticity? We all tend to teach best what we most need to learn.

Or do they preach the way of non-political successes like Steve Jobs who dropped out of school, wandered the world and ended up changing industries: the way we listen to music, talk on the phone and create content.

Or billionaire, Mark Zuckerberg who also left college and ended up changing how we communicate and connect with people all over the planet.

Maybe they focus on the generosity of the hordes of Millennials who are opting to give back before they start the rat race.

According to CNBC, 84 percent of Millennials gave a charitable donation and 70 percent volunteered in 2014.

There are many variables that make up the minds of this very important group. They are not like Baby Boomers. When we (Boomers) were kids, we mostly just played. We didn't feel pressured or threatened. We just moved together in a pack and had fun along the way. Most of us followed the formula of life: went to school, got married, got a house, had kids, went to work, started saving for retirement and look forward to playing again. Some of us didn't help change the world, but we were part of the masses who built it.

The Millennials will continue to build, but with experience as their quest and self-reflection as their guide. They will question often and choose roads less travelled. They will remain as varied as the flowers and birds that permeate this great earth.

And so, our future president may need to step off the podium and address that which matters most to our youngest workforce -- making sure to let them know that they matter too.

Jody B. Miller is the CEO of C2C Executive Search & Strategic Management. She also writes books about work/life balance, articles for The Huffington Post and LinkedIn about topics we think about (yet don't always talk about), and novels about love and friendship. Her new book; SHIFT, How to Find True Meaning in Your Work and in Your Life, will be in stores in late 2016..