But the new polls also indicate a slight but persistent advantage for Obama in Ohio, the state whose electoral votes appear to be the most critical in determining which candidate will win the election. Also as yet unresolved is whether the gains for Romney that were clearly evident in the polling data gathered late last week will persist.

Seven national surveys of likely voters were released on Tuesday. Three showed a dead-even race, while four gave Romney a slight edge of one to two percentage points. A simple average of these seven polls gives Romney a one percentage point advantage.

As of this writing, the HuffPost Pollster tracking model, which combines all public polls, both national and statewide, gives Romney a razor-thin edge in the national popular vote (46.9 to 46.8 percent, numbers that will change as the model updates with additional polls).

The tracking model shows a slightly closer race than does a simple average of the most recent polls, partly because it attempts to correct pollster "house effects" -- the factors that make the polls of some organizations differ consistently in their take on the race -- and partly because it may still be smoothing out the recent and unusually abrupt shift to Romney.

As of this writing, the model estimates that Romney gained a net 4.1 percentage points on Obama between September 27 and October 5, the day after the debate, when the model now estimates that the lines first crossed and Romney edged slightly ahead of Obama (46.8 to 46.6 percent). That shift is even larger than the 2.9 percent gain for Obama over the six days following the Democratic convention (these numbers may change on subsequent model updates).

The most important question is whether that big bump for Romney will persist or begin to fade. Nearly all of the polls released on Tuesday included interviews conducted over the three-day period, from Thursday to Saturday last week, when Romney's standing was clearly strongest. But two of the new national surveys reported that the pro-Romney trend had cooled in interviews they conducted subsequently on Sunday and Monday.

Gallup, which this week started publishing results among likely voters, reported that among the larger pool of all registered voters, Romney surged to a 47 percent tie with Obama in interviews conducted from Thursday to Saturday, but faded to a five point deficit to Obama (45 to 50 percent) in interviews conducted on Sunday and Monday nights. "Although these two days of interviewing involve relatively small sample sizes," Gallup cautioned, "they suggest that Romney's debate 'bounce' may be fading."

Separately, a new ABC News/Washington Post poll. which asked about candidate favorable ratings but did not include a vote preference question, showed a "sizable boost for Romney, and drop for Obama, on Thursday night, a day after their first debate." However, "both of those trends subsequently subsided" in the interviews conducted from Friday through Sunday, leaving only a "slight" net effect on the candidate ratings.

The other ray of hope for Democrats came from Ohio, where the average of three new surveys released on Tuesday, all conducted from Friday through Monday, indicated a much closer race but continued to show Obama with a narrow lead.

The Pollster tracking model currently gives Obama a 1.6 percentage point edge in Ohio (47.5 to 45.9 percent). Although that margin is slim, the difference is statistically meaningful, with an 83 percent probability that Obama would lead if all votes were cast today.

Ohio continues to stand out as perhaps the most crucial of the battleground states. The Pollster tracking model estimates that Obama continues to lead by margins we classify as "leaning" on the Election Dashboard map (2.5 percentage points or better) in Wisconsin, Iowa, Nevada and another 20 states accounting for 263 electoral votes, just seven shy of the 270 needed to win. The model shows Romney leading by 2.5 points or better in North Carolina and 23 other states, accounting for 206 electoral votes. 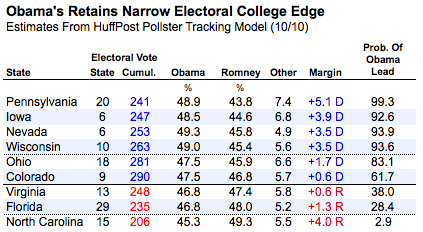 Ohio would put Obama over the top in the electoral vote count, so his narrow edge there could end up making all the difference.

1 / 5
Photos Of 17-Year-Old Mitt Romney
Mitt Romney, right with his mother and brother Scott, shortly after departing a plane at San Francisco International Airport. He was in town for the GOP Convention.
John McBride, San Francisco Chronicle / Corbis