WASHINGTON -- Individual polls on the presidential race released on Tuesday varied as they always do, but they continue to boil down to a near deadlock nationwide between Barack Obama and Republican presidential nominee Mitt Romney. Obama retains a narrow advantage in the key battleground states, although his margins in two states -- Iowa and Ohio -- have narrowed slightly over the past week.

Nationally, the HuffPost Pollster tracking model ticked very slightly in Romney's direction on Tuesday. As of this writing Wednesday, the model gives Romney an edge over Obama of just four-tenths of a percentage point in the national popular vote (47.2 to 46.8 percent). The poll-tracking model helps reduce the random variation associated with individual polls but does not eliminate it, and random fluctuations within a range of roughly +/- 0.5 percentage points in the national estimate have been common in recent weeks. As always, these estimates update several times a day as new polling data becomes available.

Again, given the virtual tie apparent in the national popular vote estimate for the past two weeks, tiny shifts may appear to be more meaningful than they are, and even the way pollsters round their results to the nearest whole digit can contribute to the low-level random noise.

Consider Tuesday's update from the newly launched daily tracking poll conducted by The Washington Post and ABC News. Like most pollsters, Post/ABC reports results in whole numbers to avoid implying false precision about results with a margin of sampling error of +/- 3 percent. In this case, to help illustrate the exceptionally close nature of the results, ABC reported that Romney's edge over Obama in their interviews conducted from Oct. 19-22 was just seven one-hundredths of one percent (48.51 to 48.44 percent). That result rounded to a one-point edge, but had one respondent answered differently, their rounded numbers for the day might have been a tie.

The point is that all estimates of the horse race are subject to imprecision and random noise, and the HuffPost tracking model is no exception.

New surveys from the battleground states were relatively sparse on Tuesday, but they include a new automated poll from SurveyUSA showing Obama leading Romney in Ohio by 3 percentage points (47 to 44 percent). That's just slightly better for Obama than the current Pollster estimate for Ohio, which as of this writing shows him leading by 2 percentage points (48.0 to 46.0 percent).

Ohio remains one of the most critical states in the election. Along with Wisconsin, Nevada and Iowa, where the model estimates Obama leading by 2 to 3 percentage points, these states would get Obama to 277 electoral votes, just over the 270 needed to win. 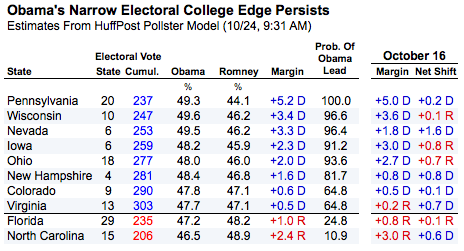 Those following the HuffPost Election Dashboard map will note that the color used to categorize both Ohio and Iowa has shifted from light blue (lean Obama) to yellow (tossup) since Monday. That categorization is based on the margin separating the candidates; we assign states to the "tossup" category where the margin rounds to 2 percentage points or less (i.e., 2.4 or less).

New polls in both states over the past week have narrowed the estimated margins in Ohio and Iowa slightly over what the model was showing on Oct. 16 (the day of the second presidential debate). Nevertheless, the model now indicates 91 percent and 94 percent confidence that Obama would lead in Iowa and Ohio, respectively, if all votes were cast today.