WASHINGTON -- Despite laments to the contrary, the thousands of journalists on hand to cover this week's Republican National Convention are not there in vain.

The delegates may no longer deliberate to choose their party's nominee, but conventions still mark the moment when many ordinary voters begin paying attention to the presidential campaign. History shows that voter preferences can shift meaningfully during the convention period, although distinguishing real change from a fleeting "bounce" is not easy.

As you watch the polls over the next few weeks, here are four things you should know:

1. Convention bumps matter. Or perhaps more accurately, conventions in the past 30 years have often proved to be turning points, producing significant changes in voter preferences that then persisted through Election Day. Four times since 1988, as political scientists Robert Erikson and Christopher Wlezien point out, "the leader in the polls immediately before the conventions emerged trailing after the convention, and went on to lose the popular vote."

Charts of all available public polls from past elections illustrate this point. George H.W. Bush in 1988, Bill Clinton in 1992 and George W. Bush in 2004 all surged from behind during the convention period and went on to win the election.

Similarly, in 2000, Al Gore moved ahead in most polls following the party conventions and went on to win the popular vote, although he ultimately lost the election because he trailed in the Electoral College vote following recounts and lawsuits in Florida.

More important, as Erikson and Wlezien note, these convention shifts have typically been the most decisive changes of the campaign. By comparison, the heavy campaigning and presidential debates that follow "change few minds." They pooled the polls over the past 15 elections and found that "no candidate who was behind" two weeks after the conventions "has come back to win the popular vote."

2. Conventions are when many voters start following the campaign. As surveys conducted by the Pew Research Center have shown, public interest in the campaign jumps substantially during the conventions. Four years ago, Pew found that the percentage of Americans who said they were following election news very closely jumped from 28 percent before the conventions to 47 percent just after (previous elections showed very similar patterns). 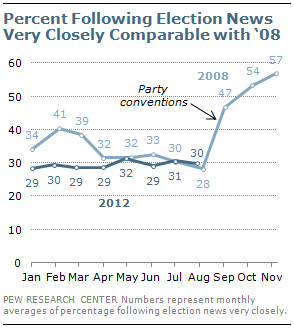 For the past six months, Pew Research surveys have shown voter attention closely tracking levels measured in 2008 before that year's conventions. Barring a sharp break from history, many voters will begin tuning into the campaign in earnest this week.

3. The bumps may be getting smaller. As political scientist Thomas Holbrook explained in HuffPost earlier this week, the last several election cycles show a "general trend toward smaller bumps."

Holbrook compared polls taken a week or two before each convention with those taken the week after. As shown in the chart below (where the Democratic bump is blue and the Republican bump is red), double-digit polling bumps, common in the past, have not occurred since 1992, and the bumps of 2004 and 2008 were among the smallest since 1964. 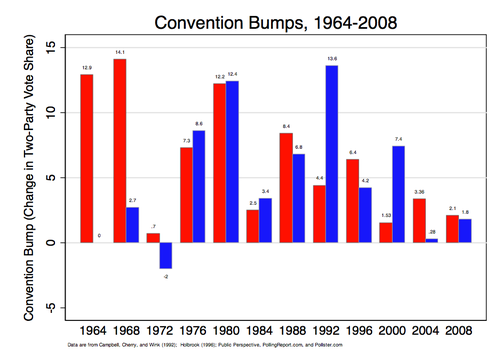 As Holbrook explained, some of this pattern may result from changes in timing between the conventions. In past decades, they were held earlier in the summer with a gap of three to four weeks between the two. In 2008 and 2012, the two conventions have been held over consecutive weeks.

Other trends may also be at work, such as decreasing prime-time coverage by the broadcast networks, diminishing ratings for the networks that provide coverage and a continuing trend toward earlier campaign advertising, beginning before the conventions.

4. Some bumps turn out to be temporary bounces. Yes, there's a catch. Past conventions have also produced changes in the surveys, particularly on daily tracking polls, that turn out to be fleeting "bounces." In 1996 and 2008, for example, Republican nominees Bob Dole and John McCain both saw short-term increases in their poll support that quickly faded.

One possible explanation is that each convention produces a temporary boost in support for its nominee, with the second convention reversing the gains of the first. Another explanation may be that the challenges of tracking voter preferences on a daily basis via telephone lead to exaggerated estimates of convention bumps.

This year, as four years ago, the Labor Day weekend comes between the Republican and Democratic conventions, further complicating the ability of pollsters to get a truly accurate read on voter preferences. As Kathy Frankovic, then CBS News director of surveys, wrote four years ago, the three-day holiday produces more voters who don't or can't respond. "People are away from their homes, heading back from summer vacation, or preparing their children for the start of the school year," she wrote.

That did not prevent pollsters from finding a brief bump for Barack Obama four years ago, but it was soon overwhelmed by a bigger McCain bump, which, in turn, gave way to an Obama surge two weeks later.

So if history is a guide, we may look back on the convention period as a pivotal moment in this year's campaign. Or it may raise voter interest but ultimately make little lasting difference in voter preferences. Either way, we'll need to wait until mid-September to know for sure.