WASHINGTON -- No one would call it a "surge," but the national tracking polls are beginning to show signs of a slight uptick for President Barack Obama.

The most recent national tracking surveys released as of Saturday continue to produce a mixed result in terms of the nominal leader, although all but one show a relatively close race between Obama and Republican nominee Mitt Romney. With the exception of the Gallup Daily tracking poll none produces margins for the leader large enough to be considered statistically significant for any individual poll.

However, the most recent releases of five of the six tracking polls show net movement to Obama or away from Romney of between 1 and 4 percentage points compared to results from interviews conducted by each pollster between the first and second presidential debates.

Two of these polls -- the automated telephone surveys conducted by Rasmussen Reports and the Democratic Party affiliated firm Public Policy Polling (PPP) -- have been completed since the debate on Oct. 16. The rest continue to report on interviews conducted just before and after.

But again, five of the six show at least a 1 percentage point gain for Obama. Gallup is once again the exception, showing a 4-point net gain for Romney since early October.

The net effect is barely visible on the national popular vote chart produced by the HuffPost Pollster poll tracking model, which takes all public polls, both national and statewide, into account. As of Saturday evening, the chart shows Obama with a razor-thin margin over Romney (47.2 to 46.8 percent), which represents a gain of just under a half a percentage point over the last six days.

While Obama's razor-thin advantage in the popular vote as estimated by the model and the change over the last seven days are both still too small to be considered statistically significant, the model's reported confidence that Obama is leading the national popular vote has ticked up from 50 to 65 percent over the past week.

At the state level, polls continue to generally confirm the results of the past two weeks. Romney has certainly gained in the battleground states since the first debate. He now leads in North Carolina, Florida and -- by a whisker -- Virginia. Yet the poll tracking model continues to show Romney trailing Obama by 2 percentage points or more in Iowa, Ohio, Wisconsin and Nevada. These states would combine with other states where Obama is further ahead to get him to 277 electoral votes, slightly more than 270 needed to win. 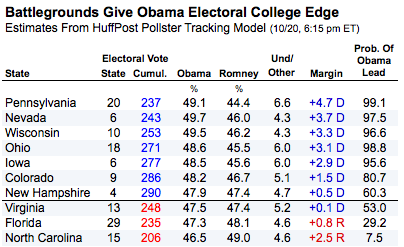 State level surveys so far provide less opportunity to assess change since the second debate, since most of the most recent polls were either still in the field before the debate or did not conduct a prior survey before the first debate in Denver. The one firm that produced polling snapshots before-and-after the second debate is Rasmussen Reports, and its surveys appear to indicate slight gains for Romney.

Two of Rasmussen's recent polls (in Ohio and Wisconsin) show no net change since before the second debate, two (in Virginia and Florida) show a 1-point net shift to Romney and a third (in North Carolina) shows a 3-point net gain. The average net shift to Romney or away from Obama is 1 percentage point.

There is a catch, however. Rasmussen is one of the few pollsters to routinely weight its samples so they match predetermined targets for the percentage of likely voters that identify as Democrats or Republicans. The catch, as Rasmussen Reports confirms to The Huffington Post, is that its weighting targets are now adjusting on a weekly basis to match the average party identification for likely voters measured on their last six weeks of calling (after weighting for demographics, but not for party). So the party weights for the past recent week may be slightly different than the party weights the week before.

More important, the weight targets for Rasmussen's national samples grew slightly more Republican in mid-October. Although the data are published on pages available to paid subscribers only, Rasmussen indicates that the national interviews for the week of Oct. 8 to 14 gave Democrats a 1-point edge over Republicans (38 to 37 percent). The party balance for the two prior weeks, Oct. 1 to 7 and Sept. 24 to 30, was a 3-point Democratic advantage (39 to 36 percent).

In the past, Scott Rasmussen has explained that the state-level party weighting targets are derived, in part, from national numbers and the "national shifts appear to provide a good indicator" of mid-year changes at the state level.

A 3-point shift toward a more Republican identification would more than explain the one-point shift to Romney in the five states Rasmussen surveyed this week.

Again, the upticks shown for Obama in all but one of the national trackers are slight so far. Even if confirmed by further tracking they may represent little more than a regression to the mean of a 2 percentage point lead in the polling averages that polls have shown for much of 2012.

CORRECTION: A previous version of this article incorrectly listed the second presidential debate as occurring on Oct. 15, 2012. The event in fact took place on Oct. 16, 2012.