There have been a number of news articles about voter turnout in recent presidential primaries and the perceived enthusiasm on the GOP side, and the rather lackluster relative turnout on the Democratic side. But differences in turnout aren't necessarily the result of differing levels of enthusiasm. In fact, turnout in party primary contests are largely explained by a party's "position" in the electoral cycle.

Position refers to whether an incumbent is running, but also whether the party currently controls the White House. For example, in 2016 we have an open nomination contest where no incumbent is running for reelection, as it was in 2008. However, an open contest is structured differently for the in-party than for the out-party. Republicans, who have been out of power for eight years, may well be hungrier for a victory and more motivated to turn out.

I analyzed turnout in primary elections (omitting caucuses) in each presidential election cycle since 2004. I calculated voter turnout by the number of primary voters divided by an estimate of the eligible population using a normal party vote measure.

Figure 1 shows average turnout rates by party over the past four elections. The results show that 2008 was a high turnout contest for the Democrats and 2016 appears to be the high point for the GOP. Lowest turnout rates were 2004 for Republican and 2012 for Democrats. What party characteristics do these elections have in common? 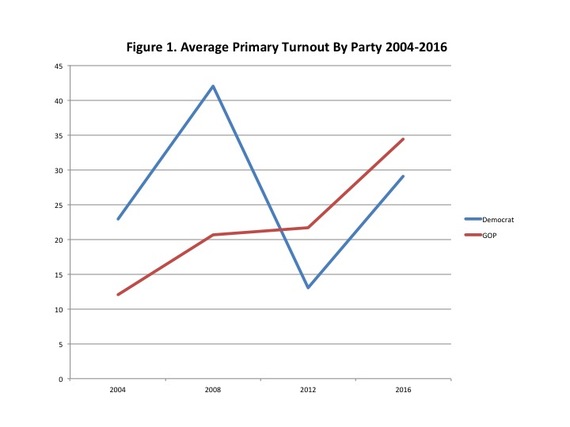 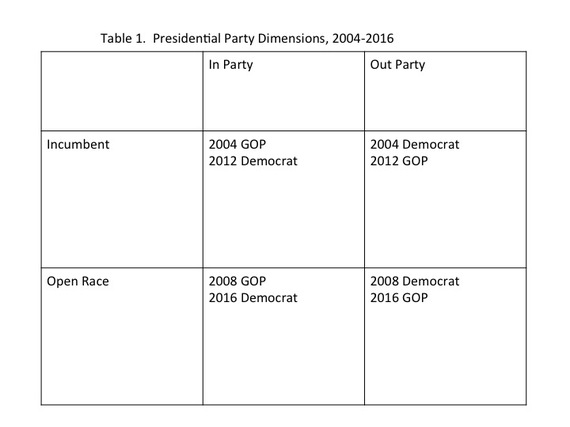 Although it might be reasonable to assume that an open race would stimulate high turnout in both parties, that might also depend on whether the party is in or out of power. Out party members may have greater uncertainty about who should be the nominee, which may lead to more competition over an extended period of time and hence greater turnout for the out-party than the in-party. Campaigns with incumbents running may be particularly less exciting, especially for the party in power. Because there is no competition for the in-party, these contests should produce the least primary turnout.

Considering party contexts leads to some specific hypotheses about turnout generally and how party context in the nomination campaign should affect it. Therefore, instead of using the election year to compare across party, I use party electoral context. I have placed the turnout rates by party context for 2004 through 2016 in Figure 2.

As this figure suggests, party electoral context is very important for determining voter turnout. Regardless of whether voters are in the Democratic or Republican Party, turnout is highest when the party has been out of office for 8 years and lowest when an incumbent is running for reelection. Interestingly, incumbent contests for the in-party and out-party see very similar levels of turnout. Open contests for the in-party and for the out-party show that Democratic contests produced higher turnout rate than GOP contests.

This analysis shows that the "lower" Democratic turnout we are seeing so far in 2016 is actually larger than what we saw for the GOP in 2008 under a similar electoral context. Of course, the 2016 contest has not finished yet so Democratic turnout could move up or down. If Clinton clinches the nomination soon, it would have a negative impact on turnout in future contests and lower average turnout levels, making it more consistent with GOP turnout under the same electoral context. 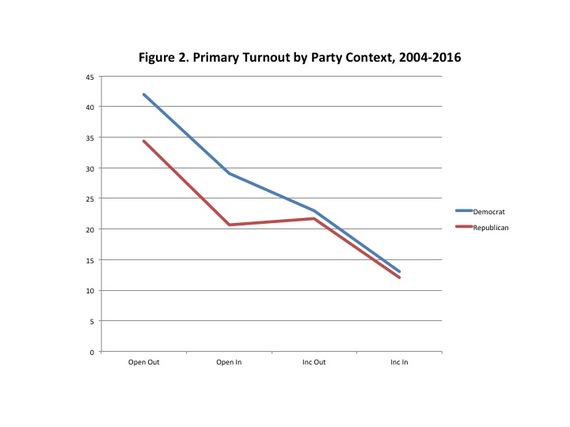 Conclusion This analysis suggests that party position is very important to understanding turnout. Party position helps to create a context that encourages more or less participation by voters because it helps to structure candidate behavior and voter enthusiasm. Placed in a party position context, the Democratic and Republican primary turnout in 2016 look more expected and normal. We would expect higher turnout because it is an open contest and we would expect even higher turnout for the party that has been out of power, which is what we see.

This blog was originally posted on Vox/Mischiefs of Faction.