As much as we would like to think of our Founding Fathers as icons or demigods, they did not escape the influence of the times in which they lived. Time has to pass before we can revisit their lives and discuss their feet (toes?) of clay. And maybe even (gasp!) bring up the subject for middle-grade readers. George Washington, father of our country, a believer that "all men are created equal," lived with cognitive dissonance because he was a slaveholder. He called his slaves "my people" but, according to the law, they were his property. 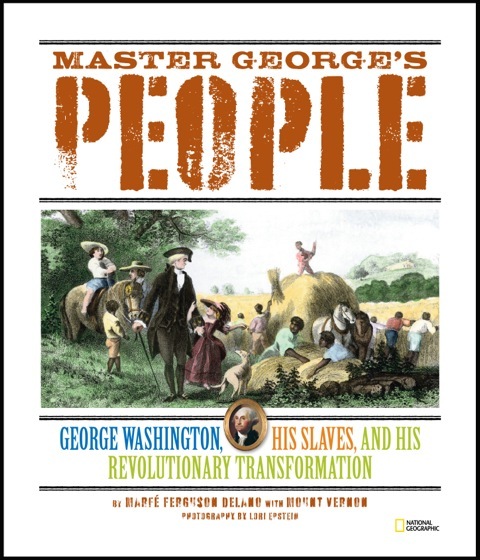 Master George's People: George Washington, His Slaves, and His Revolutionary Transformation by Marfé Ferguson Delano is a no-holds-barred story of George Washington's gradual coming to grips with this internal conflict. Washington was the wealthy owner of a plantation that was built and maintained by slave labor. If you go to Mount Vernon, you can see George Washington's lifestyle writ large. Master George's People captures that lifestyle, often from a slave's point of view, with telling photographs by Lori Epstein. They were shot on location at Mount Vernon with costumed historical re-interpreters standing in for the slaves buried on the estate in unmarked graves. They give the book a relevant contemporary feeling.

George Washington freed all his slaves in his 29-page, hand-written Last Will and Testament, July 9, 1799, which is reproduced as endpapers in this book. What brought about this change of heart? What gave him the courage to write this will and sign almost every page (he missed one) to make sure no one could mistake his intent? It is one thing to state an ideal. It is another to live up to it, go counter to the traditions of the day, and do the right thing.

He was the only Founding Father to do so. Thomas Jefferson, James Madison and George Mason all claimed to hate slavery, but they passed on their human chattel to their heirs. On Presidents Day, we stop and remember what our greatest presidents stood for. This is one more reason to celebrate the Father of our Country.

Marfé Ferguson Delano wrote about the excitement of the photo shoot here. You can read a stellar review of Master George's People here.