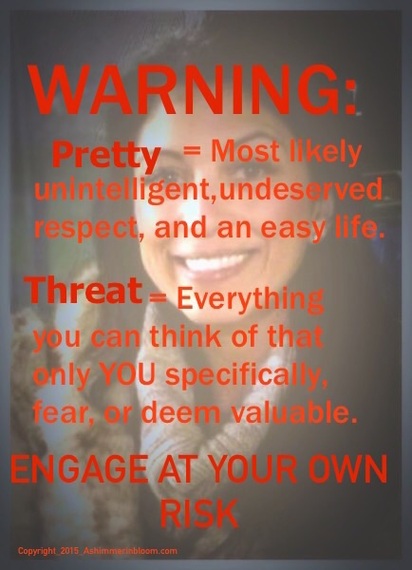 Full warning: Most of you will get pissed off. I was furious myself. Let's call it even. Immediately following this rant I will send you (and everyone) love and compassion. But for now, let's dive in! Unless, that is, you think a "pretty" person is unable to captivate your attention with this many words in one sitting.

In a conversation about my writing, some good friends were suggesting I should "remove all pictures" of myself in posts, if I "wanted to be taken seriously."

Is it my job to shrink and change how I look so other people do not have to own their own preconceptions? No. I won't. I refuse. I have friends of all shapes and sizes that I respect and love. I don't discriminate on any factors beyond being mean, unhealthy for me, or too negative. That's it. Call me weird.

I call it human compassion.

First, Can we agree on a few common assumptions?

I have no problem being transparent, so in full disclosure, I too, make assumptions that would offend. For example, in the movie Up in the Air Ryan Bingham says, "I'm like my mother, I stereotype. It's faster." I do (if traveling sans my three kids) get in line behind the business travelers, not the mom juggling her double stroller, toddler and coffee whilst donning a gaze of defeat.

I am not looking for a brouhaha rally behind me. I am not trying to evoke praise or an apology. I am not here to scream "injustice!" I am not supporting or even remotely denying that attractive women have entire industries positioned to exploit and applaud their perceived beauty.

My point is this: Am I pretty? Sure. Should I apologize? No. Did I do anything to be born this way? Not a damn thing! I get it. I can take my pretty mouth and shut it. Right? Wrong. That's the fundamental difference I have with most people willing to be honest about such topics. My respect and acceptance of others is a "TBD." I am not even asking for change. I am merely saying to no one in particular, that I'm in full rebellion! (echo, echo, echo)

I'll even admit that I have capitalized on beauty, and it has indeed afforded me open doors, unearned respect and privileges. I love working out. I wear minimal makeup but false eyelashes whenever I can. I believe my interests in feeling "pretty," fit and feminine do not negate my right to be intelligent, grounded or kind.

I would love if maybe one person reads this, and after contemplating, perhaps admits that pre-conceived assumptions are useless and can be wrong. The only assumption I make is that I know nothing about a stranger. People surprise me a lot. How? I do not pre-judge them, but instead consider that I haven't the slightest idea about who they are. (Good or bad.)

Most strangers believe that I've manipulated my way to, for and in every opportunity possible. I'm used to it now. I have adjusted by disarming them with self-deprecating humor and/or hiding behind a bun, glasses and clothes purchased a size too big. (At the advice of my father.)

I am simply disillusioned, disappointed and discouraged. More specifically, I'm angry. I am also fully aware that no one may care. It's sad that in my life, in 2015, nearly a hundred years after suffragettes boldly fought to be heard and seen for their minds, souls and inarguable human rights, that I have to ask, "As women, are we being fair?"

I bow with a full heart of gratitude as an American woman who can vote, attend university, work, drive and speak freely. It is not lost on me. I recognize that my ability to be who I am exists because women far braver than I have pioneered a grueling, once unthinkable, path. A path often trampled over with sex tapes, vulgarity, obnoxious entitlement and inane celebrity caricatures of whom masses of other women follow and idealize.

Let me ask you a question: If an attractive, pretty-faced woman in a well-fitted dress walked into an auditorium filled with other women eager to hear executives speak on female empowerment, how would most of the audience first react? What would they assume if she wore well-done makeup? Is she an imposter? Do you think she was solely met with supportive women on her climb to success, or perhaps with skepticism and mistrust?

Conversely, if a woman does not wear makeup, refutes the surface-only societal and media confirmations that beauty is paramount or that "skinny" is celebrated do those beliefs alone make her better than? Wiser? More evolved?

Personally, I've dated a hippie, a bald man, a model, an IT nerd, a spinal cord injury-survivor secure in his wheelchair and an internationally renown billionaire, to name a few. The only common factor was that they stimulated me intellectually. They were funny, or in some way difficult to understand. More common is that I am drawn to juxtapositions. I admire a person that does not match their proverbial "book cover."

I care not, if it is a man or woman. I don't see skinny or rotund, befreckled or warted. I care about ideas! I care about who they are! I care about kind hearts! What they stand up for on principle! 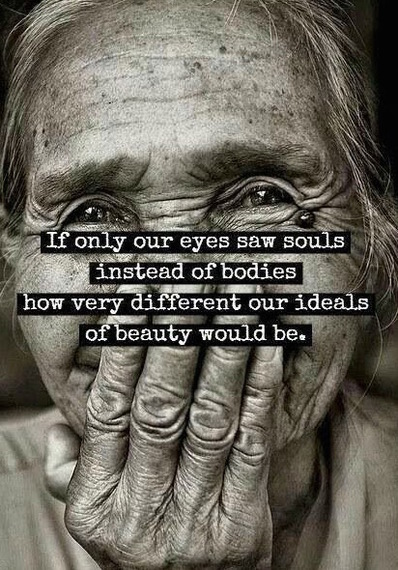 I can pre-warn and throw out numerous disclaimers, but my bawdy, self-effacing nature is most likely going to be misconstrued as "intimacy" and therefore, a threat to other women. I am not interested in complicating my life, or yours. Been there, done that. Almost didn't survive.

Maybe it's just a call to fairness, humanity and a little bit of benefit before doubt? Angelina Jolie, Oprah Winfrey, Ellen Degeneres, Whoopi Goldberg, Joyce Carol Oates, Anais Nin, Amelia Earhart, Melissa McCarthy, Amy Poehler... and countless other women who had to CLAW their way through a door, and then PROVE their "worth" until somebody saw past their birth-given right to care about how they looked... Or not to.

So, hope floats! I will leave my pictures up and keep believing there are people who will listen and look for a person`s inner soul, not their outer shell before concluding who they are.